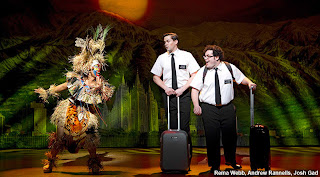 The Fox Theatre presents the musical The Book of Mormon through March 3. "Nine 2011 Tony Awards® say it's the Best Musical of the Year. Vogue says, 'It's the funniest musical of all time.' And The New York Times says, 'It's the best musical of this century.' It's THE BOOK OF MORMON, the Broadway phenomenon from South Park creators Trey Parker and Matt Stone and Avenue Q co-creator Robert Lopez. The Daily Show's Jon Stewart calls it 'A crowning achievement. So good, it makes me angry.' Contains explicit language." If you're going out into the cold, you might as well make it worthwhile be catching one of the hottest new musicals in years. The Fox Theatre is at 527 North Grand in Grand Center. For more information: fabulousfox.com.

The Repertory Theatre of St. Louis presents Sense and Sensibility, based on the Jane Austen novel, through March 3. “When their father's death leaves two sisters with uncertain prospects, they must navigate the unpredictable seas of courtship with only their hearts to guide them. The course of true love winds through flirtation, folly, scandals and secrets as reserved, sensible Elinor and romantic, impulsive Marianne attempt to find their way in the world. This lovely, intimate adaptation of Jane Austen's first novel is a charming journey through hope and heartbreak as two young ladies find that when sense and sensibility meet, love can't be far behind.” I have the wrong set of chromosomes to be a Jane Austen fan and even I found this elegant and beautifully staged production very enjoyable. Performances take place at the Loretto-Hlton Center, 130 Edgar Road in Webster Groves, MO. For more information, call 314-968-4925 or visit repstl.org. Read the 88.1 KDHX review! 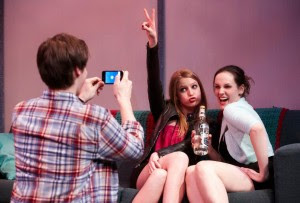 HotCity Theatre presents the world premiere of Connected by Lia Romero through February 23. The play is designed to work in combination with Facebook, where profiles will be created for each of the characters as though they were real people. Audience members are invited to "friend" the characters in the weeks leading up to the show to find out more about their backstories. In his review for 88.1 KDHX, Robert Mitchell says theplay "offers a fresh and funny look at the lives of Ladue high school students and their use - and misuse - of social technology". Performances take place at the Kranzberg Arts Center, 501 North Grand in Grand Center. For more information, visit www.hotcitytheatre.org or call 314-289-4063.

The Black Rep presents The Mountaintop by Katori Hall through March 9. "April 3, 1968, Memphis. The Lorraine Motel, Room 306. where Martin Luther King Jr. spends his last night on earth." I haven't seen this yet, of course, but the topic is provocative and timely. Besides, the author is the winner of the Blackburn Prize for outstanding women playwrights and the play has earned England's Olivier Award for best play. In her review for 88.1 KDHX, Megan McEnery describes the production as "intriguing, honest and totally worthwhile."  Performances take place at the Grandel Theatre, 3610 Grandel Square. For more information, visit theblackrep.org or call 314-534-3810.

Stray Dog Theatre presents Charles Busch's comedy Psycho Beach Party through Saturdays at 8 PM. There will be a matinee on the closing Saturday at 2 PM in addition to the evening show. “Comedy meets horror in this wacky, campy retro-fusion of teenage surfer flicks and slasher sagas. Set in 1962, teen tomboy Chicklet Forrest desperately wants to belong to the surfer crowd on Malibu Beach. Unfortunately her many split personalities get in the way, while her most dangerous alter ego has nothing less than world domination in mind.” In her review for 88.1 KDHX, Tina Farmer describes it as a "a spirited romp through the 'golden age' of beach and surf movies that playfully, occasionally darkly, jabs at the funny bone." Performances take place at The Tower Grove Abbey, 2336 Tennessee. For more information, visit straydogtheatre.org or call 314-865-1995.
Posted by Chuck Lavazzi at 5:06 PM