Highly Distracted Productions presents Asperger's: A High Functioning Musical Friday and Saturday at 8 PM and Sunday at 2 PM, August 16-18. “Back by popular demand after three sold out performances at the St. Lou Finge Festival, Asperger's: A High Functioning Musical tells the story of six young adults with Asperger's attending a support group as they face the problems of entering adulthood and leaving the pain of childhood behind. The songs can be rollicking and tender. Come celebrate the geek in all of us.” Performances take place in the Little Theater at Clayton High School, 1 Mark Twain Circle in Clayton. For more information: aspergermusical.brownpapertickets.com.

My take: This show was, in fact, the hit of the Fringe Festival, at least as far as audience size went.  Every performance was packed.  "Between the cast, music and production," wrote Erica Kenney in a review for 88.1 KDHX, "everything came together to make the premiere a hit at St. Lou Fringe and Asperger's: A High Functioning Musical is sure to be around St. Louis for a long time."  That looks pretty prophetic right now.  This is the sort of show that should work well in the intimate black box theater at Clayton High School.

Stages St. Louis presents Legally Blonde, the Musical through August 18. Performances take place in the Robert G. Reim Theatre at the Kirkwood Community Center, 111 South Geyer Road in Kirkwood. "Sorority sister Elle thinks she has her future all tied up with a nice, little pink ribbon, until her boyfriend suddenly dumps her for someone more “serious.” But don’t break out the tissues just yet! This is one girl who doesn’t take “no” for an answer as she sets out to prove that being true to yourself and going after “what you want” never goes out of style." For more information, visit stagesstlouis.org or call 314-821-2407.

My take: I haven't listed this in earlier Chuck's Choices because I'm just not that big a fan of the show. But what the heck; this is the last weekend and this production has gotten some good reviews. "To say that Stages St. Louis' production of Legally Blonde sparkles," writes Tina Farmer at KDHX, "seems an understatement; the musical is big and confident, filled with bright lights, pink glitter and, yes, sparkle. The production never takes itself too seriously, however, and the actors work together well, keeping the emphasis on the plot's familiar twists while delivering smart, endearing performances." So go and enjoy, already. 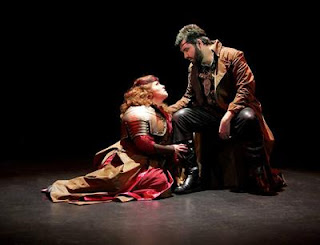 Union Avenue Opera presents Wagner's Die Walküre, the second of the four "Ring" operas, in a condensed and reduced version by English composer Jonathan Dove and director Graham Vick, Fridays and Saturdays at 8 PM, August 16-24. Performances take place at the Union Avenue Christian Church, 733 Union at Enright in the Central West End. The opera is sung in German with projected English text. For more information, visit unionavenueopera.org or call 314-361-2881.

My take: As I noted in a blog post earlier in the week, this is a massively ambitious undertaking for a small opera company that has not shied away from pushing the envelope in terms of what can be accomplished with their financial and physical constraints. It'll be exciting to see what Union Avenue does with this difficult but rewarding material. Note, by the way, that while parking is free, the lot fills up quickly, so it's a good idea to get there early. You can always have a snack and drink (non-alcoholic, alas) in the lobby before the show. 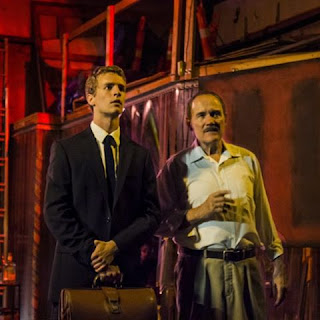 Encore! Theater Group presents John Logan's two-character drama Red, about 20th Century abstract painter Mark Rothko. Performances are Friday and Saturday at 8, August 16 and 17, at the Warehouse at All Trades Supply located at 10 Kirkham Industrial Drive, Webster Groves. "Mark Rothko is at the height of his powers. His work, long rejected by critics, is suddenly hailed as some of the most important of this century. He is the new king of art in New York, and his coronation will be the flashiest commission in the history of painting: $35,000 for a series of epic murals at the Four Seasons restaurant. But...canvases this large cannot be lifted by a single man, not even a titan. So he hires an assistant (Ken). This young artist and his fiery ideas force Rothko, the surest thing in the world of modern art, to question everything. John Logan's 90-minute intellectual thrill-ride serves as a puzzling reminder of how difficult and dangerous the climb towards an artistic vision can be, and how worthwhile." The cast includes 88.1 KDHX theatre critic Steve Callahan as Mark Rothko. For more information: email encoretheatergroup at gmail.com, call (314) 329-8998, or visit squareup.com/market/noxp-entertainment-corp/red-tickets.

My take: I've known Steve Callahan for many years and can attest to his skill as an actor. As for the play itself, in his review of the Repertory Theatre of St. Louis production back in 2011, Robert Boyd describes it as a "marvelous piece of theater." "In scene after scene," he writes, "the interplay between dark and light, between the character Rothko's deepening delusion and insecurity and Ken's ingenuous desire to read genius into the master and all that he touches, creates astonishing dramatic intensity." Setting the play—which takes place in Rothko's warehouse studio—in an actual warehouses should add verisimilitude.

The Theatre Lab presents Cormac McCarthy's The Sunset Limited August 9-17. “The play involves only two nameless characters, designated 'White' and 'Black', their respective skin colors. Offstage, just before the play begins, Black saves White from throwing himself in front of a train. The title, The Sunset Limited, is derived from the name of a passenger train that travels from New Orleans to Los Angeles. All of the action takes place in Black's sparse apartment, where the characters go (at the behest of Black) after their encounter on the platform. Black is an ex-convict and an evangelical Christian. White is an atheist and a professor. They debate the meaning of human suffering, the existence of God, and the propriety of White's attempted suicide.”  Performances take place at the Clayton Little Theater, 1 Mark Twain Circle. For more information: (314) 599-3309

My take: McCarthy's work is always worth seeing and it's good to see another theatre group on the scene. "The actor-focused Theatre Lab," writes Tina Farmer at KDHX, "makes a bold statement with its inaugural production, The Sunset Limited, directed by Ryan Foizey. Focused on character and intellect, the show benefits from strong performances by Robert Alan Mitchell as Black and Zachary Allen Farmer as White."