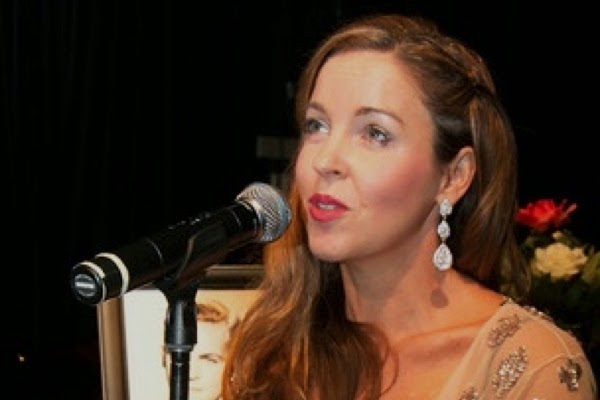 Who: Meghan Kirk
What: The Story Goes On
Where: The Gaslight Cabaret Festival at The Gaslight Theatre, St. Louis, MO
When: March 20, 2015

St. Louis' own Meghan Kirk has been appearing at the Cabaret Project's monthly open mic night (which I host) for around a year now. I've been impressed as hell with her work there, but haven't been able to get to one of her shows until this past Friday, when she presented a revised version of the show she premiered at the Gaslight Cabaret Festival last fall.

I'm glad I finally did; she's a tremendously talented and charismatic performer—a classic singing actress with solid vocal technique and the acting chops necessary to inhabit a lyric.

As Ms. Kirk said at the very beginning of her show—right after a charmingly flirty romp through Kander and Ebb's "Don't Tell Mama"—she's a dyed-in-the-sequins musical theatre geek. No surprise, then, that her song list is heavily weighted towards numbers originally written for the stage, from Kern and Hammerstein's "Bill" to Jeff Bowen's " A Way Back to Then" from that ultimate insider musical theatre send-up, "[title of show]" (2006). But she also made room for recent cabaret hits like Heisler and Goldrich's "Taylor the Latte Boy" and a clever Beatles medley that crams a surprising number of the Fab Four's hits into an remarkably short time span.

Ms. Kirk knitted all this together with memories of her life, family, and multiple careers as a performer and flight attendant on private jets. That "this is my life" approach can be risky—your audience might not find your personal story as interesting as you do, after all. But Ms. Kirk kept the anecdotes short, entertaining, and focused on the task of providing context for the songs, so her patter never degenerated into the kind of self-referential navel gazing that sometimes accompanies the approach.

Of particular importance were her memories of her grandfather, a former professional singer whose fondness for music of the stage and screen colored her childhood. Family Christmas gatherings, she recalls, were more not so much about carols as about selections from "Oklahoma." This sets up a touching moment towards the end of the show when she sings a duet version of Sondheim's "Love, I Hear" (from "A Funny Thing Happened on the Way to the Forum") with the digitally remastered voice of her late grandfather, culled from private recordings he made in the 1960s.

That's the sort of thing that could have been overly precious, but Ms. Kirk's good taste and professionalism kept it real and made it the emotional heart of the show.

Guest stars can also liven up an act, and Ms. Kirk had two very strong ones this time. Local singer and choreographer JT Ricroft joined her for an engaging run through Kern's "I Won't Dance" (with the Dorothy Fields lyrics) and guest pianist Dan Duffy took over the baby grand from Carol Schmidt for Jason Robert Brown's always welcome "Stars and the Moon" (from the under-rated "Songs for a New World").

Speaking of Ms. Schmidt, her arrangements fit Ms. Kirk's voice and persona as perfectly as the singer's shiny low-cut gown fit the rest of her, and her backup vocals added lovely touches, most notably in a medley that mixed "Leaving on a Jet Plane" with Joan Baez's highly personal "Speaking of Dreams." And Ms. Schmidt's pianism was impressive as always. Ben Wheeler provided a solid musical foundation on acoustic bass.

Meghan Kirk's skillfully crafted and thoroughly enjoyable show was part of the spring edition of The Presenters Dolan's Gaslight Cabaret Festival, which continues through April 11 at the Gaslight Theater in the Central West End. For more information: gaslightcabaretfestival.com.
Posted by Chuck Lavazzi at 1:04 AM