Cabaret Preview: Ben Watts' "Wonderful Enough" at the Kranzberg, May 30, 2015 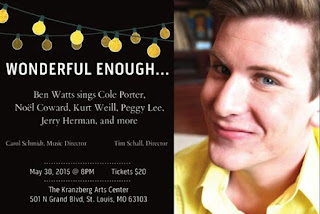 Cabaret, according to local cabaret pro Ken Haller, is the art of telling stories through song—which means it's a form of theatre. A well-constructed cabaret act is ultimately a kind of one-act play, which is why actors—who have the advantage of understanding dramatic form—often create some of the best cabaret.

Which brings us to "Wonderful Enough," the cabaret debut by local actor Ben Watts this Saturday, May 30, at the Kranzberg.

I first became aware of Mr. Watts' talent back in July of 2009 when we both appeared in Stray Dog Theatre's "Rocky Horror Show" (him as Riff Raff, me as the Narrator). He had an obvious gift for comedy and a clear, high tenor voice that had what the late Anna Russell once referred to as "a good cutting edge"—very helpful given the then-primitive state of Stray Dog's sound system (it has since gotten a lot better). His performance as Prior Walter in Stray Dog's "Angels in America" in April of 2012 demonstrated that he could handle dramatic material as well.

Over the last few months, Mr. Watts has been making regular appearances at The Cabaret Project's open mic night at the Tavern of Fine Arts (which I host), where he has demonstrated that he can sell a ballad as well as a novelty number. You'll find plenty of both in his show this weekend, and if the rehearsal I attended on Tuesday is any indication, his performances will be solid.

I came in towards the end of the run through, so I missed some (but by no means all) of the comedy numbers. The set of ballads I saw, though, was pretty impressive. It began with a blues-infused "St. James Infirmary" (complete with a bit of Leon Redbone vocalise) before moving on to Kurt Weill's world-weary "Barbara Song" (from "Threepenny Opera") and finally a beautifully operatic arrangement by music director and pianist Carol Schmidt of Jim Steinman's "Total Eclipse of the Heart."

At that point, a break in the mood was required, and I got one in the form of Cole Porter's classic "Let's Do It"—introduced with a short and very funny monolog about the trials of gay dating in the 21st century.

I don't want to go into too much detail, since part of the fun of a cabaret show lies in the element of surprise. So I'll just say that if what I heard Tuesday is any indication, "Wonderful Enough" will be a welcome debut, and an important addition to the ever-expanding cabaret scene in St. Louis. Mr. Watts, Ms. Schmidt, and director (and local cabaret pro) Tim Schall appear to have put together a very solid evening with a well-balanced song list that cuts across multiple genres.

Ben Watts' "Wonderful Enough" is this Saturday, May 30, at 8 p.m. at the Kranzberg Center, 501 North Grand in Grand Center. For more information, visit the show web site.
Posted by Chuck Lavazzi at 8:57 PM