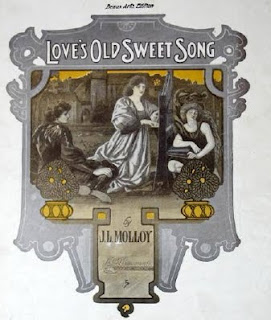 [The first in a series of postings on the music in my show Just a Song at Twilight: The Golden Age of Vaudeville.  Performances are March 26 and 27 at the Kranzberg Center in St. Louis; tickets at licketytix.com.]

G. Clifton Bingham / J.L. Molloy: Love’s Old Sweet Song (1884) – Appropriately enough, we begin with a song that dates from the early days of vaudeville. "Love's Old Sweet Song" was a popular hit but had its roots firmly in the European art song tradition; the grace notes in the printed score, high-falutin' imagery of the lyric and classically-inspired cover art all point in that direction. Composer James Lyman Molloy was a lawyer who wrote operettas but also edited a collection of Irish folk songs. The lines between art and popular music were less well drawn over a century ago. Collections for the amateur pianist usually mixed both types of music, so it wasn't unusual for a Beethoven bagatelle to keep company with cakewalk.
Posted by Chuck Lavazzi at 10:23 PM