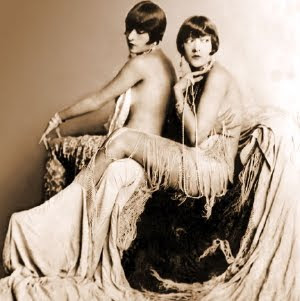 [The third in a series of postings on the music in my show Just a Song at Twilight: The Golden Age of Vaudeville.  Performances are March 26 and 27 at the Kranzberg Center in St. Louis; tickets at licketytix.com.]

Harry Carroll's composer credit would probably have come as a big surprise to Chopin (it's based on a theme from his 1834 Fantasie-Impromptu) if he hadn't been dead. Of course, if he hadn't been dead it would have been a surprise to everyone since he would have been 107 years old. It was written for a 1918 show entitled Oh, Look!. where it was sung by Harry Fox (credited by some with the invention of the Fox Trot dance step) and danced by Rosie and Jenny Dolly (a.k.a. the Dolly Sisters) who were noted for their unique synchronized dance act as well as for their sybaritic lives.
Posted by Chuck Lavazzi at 11:14 PM