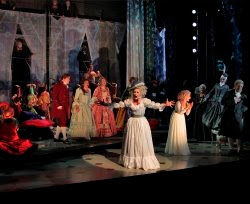 Posted by Chuck Lavazzi at 10:41 PM No comments: 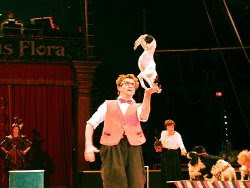 Maybe that’s because nothing brings out the latent kid in each of us so well as two and one-half hours of music, comedy and great circus acts in an air-conditioned tent in which no seat is more than 42 feet away from the ring. If the antics of Nino (the multi-talented Giovanni Zoppé) and the other members of the Clown Cavalcade don’t have you in childish giggles, for example, the remarkably well-trained pound puppies (literally – they all come from animal shelters) of Johnny Peers and the Muttsville Comix will surely do it.

Want to recapture that youthful sense of wonder? Gaze in awe at the aerial acrobatics of The Flying Pages’ trapeze act or the always-impressive human pyramids of legendary tightrope walkers The Flying Wallendas. Want to long for your childhood? Be dazzled by the tumbling, juggling and overall talent of the kids of The St. Louis Arches, the performance troupe from our local circus school, Circus Harmony. Or admire the simple gracefulness of the Ianna Spirit Riders, another product of our homegrown circus talent. Any way you look at it, an evening with Circus Flora is a veritable fountain of youth.

That’s not to suggest that there aren’t acts with more adult appeal. Alesya Gulevich, two-time Guinness World Record holder for the largest number of hula hoops spun at one time, offers a fast-paced mix of juggling, dancing and acrobatics with a cheerfully sensual subtext. On opening night it took her two tries to complete that record-making spin which, of course, only made everyone applaud that much louder when it worked and she sent the last hoop flying with a toss of her head. There’s an element of sensuality, as well, to Sasha Alexandre Nevidonski’s variation on the aerial silk theme, in which he flies around the ring with assistance of his equine co-star Mammut.

Then there are acts that will appeal to pretty much everyone, such as Terry Crane’s remarkable vertical rope act – a variation on the silk routine that uses a thick rope to great effect. And who can resist the visceral thrill of Omar Chinibekov and The Riders of the Ring, with their classic high-speed Cossack trick riding? Not me, that’s for sure.

If I have a complaint – which, as a critic, I’m expected to do every now and then – it’s with the reduced visibility of Nino this time around. In the past, Mr. Zoppé’s endearingly loopy character has been a kind of warm-up act, wandering around the house before the show sowing small seeds of chaos amongst the adults and delighting the children. Establishing the connection with the audience early on pretty much guarantees an enthusiastic response to his second-act face off with narrator Yo-Yo (theatre director Cecil MacKinnon) over Nino’s determination to play his “saxophone” (actually a trombone that appears to have had a bad night). Without that, it takes a bit longer for it all to gel.

The title of this year’s show, Medrano, refers to Cirque Medrano, a Parisian circus once situated at the edge of the Montmarte district that attracted the artistic attention of Degas, Renoir and Toulouse-Lautrec, among others. Mostly it offers a rationale for the striking red and gold color scheme of the set, eye-catching late-19th century costumes, and a can-can inspired score by Miriam Cutler performed with their usual skill by the Circus Flora Band under the baton of Jeanine Del’Arte.

So return to those thrilling days of yesteryear and indulge yourself with Circus Flora’s Medrano. Performances take place Tuesdays through Sundays through June 21 in the air-conditioned big top tent on the parking lot adjacent to Powell Symphony Hall in Grand Center. For ticket information, call 314-534-1111 or visit the web site, circusflora.org .

Sure, outside the tent you’re still an adult surrounded by death, taxes and talk radio, but inside you’re a kid again and it’s all magic. Grab a handful of popcorn and enjoy.

Posted by Chuck Lavazzi at 2:50 PM No comments: