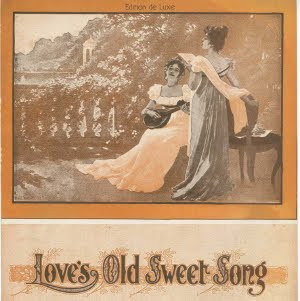 Posted by Chuck Lavazzi at 11:11 PM No comments: 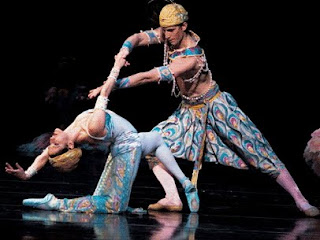 Every performing arts organization has its cash cow for the Christamas / Hannukah / Kwanzaa / Festivus / [Insert celebration here] season. Like any well-bred bovine, they hope it will generate enough money milk to help underwrite the coming season, when audiences may be less inclined to open up their pocketbooks.

For theatre groups it’s often a dramatization of Dickens’s A Christmas Carol. Opera companies tend to rely on Menotti’s Amahl and the Night Visitors, symphony orchestras on Handel’s Messiah and dance companies on Tchaikovsky’s 1892 bon-bon, The Nutcracker.

From 1989 through 2001 the biggest Nutcracker here in St. Louis was the one hosted by the Fox Theatre. It originally featured the State Ballet of Missouri (now Kansas City Ballet) and then (from 1997 to 2001) Les Grands Ballets Canadiens de Montréal. In 2007 the Fox and Dance St. Louis brought The Nutcracker back with a bang in the form of the 1987 Joffrey Ballet production.

It’s back again this year, complete with 170 young St. Louis-area singers and dancers to complement the Joffrey artists. And once again visions of sugar plums - to say nothing of flowers, snowflakes, and mice – are dancing merrily in our heads.

The Joffrey production is everything you might expect from a world-renowned company. Designed and (with the exception of the “Land of Snow” and “Waltz of the Flowers” sequences) choreographed by the company’s late founder Robert Joffrey, the production is of the traditional “story book” variety inspired by the Russian original, the 1940 Ballet Russe de Monte-Carlo version, and Joffrey’s own collection of collection of antique toys and Christmas cards. It’s visually stunning – a late 19th-century print come to life, complete with dancing dolls and a 15-foot-tall Mother Ginger.

It was also, some roughness in the winds not withstanding, a pleasure to hear thanks to generally solid playing by the Ballet Orchestra of St. Louis. The Fox so often plays host to touring shows with reduced pit bands that it was a treat to hear something close to a full orchestra in that space.

All the elements you’d want in a polished Nutcracker were present when we saw the show on Saturday afternoon, including spectacular dancing by the principals and precision work by the ensemble and the various specialty turns in Act II. I was particularly taken with Fabrice Calmels and the astonishingly flexible Kara Zimmerman in the sinuous Arabian “coffee” duo as well as by Megan Qurioz and Temur Suluashvili as the Sugar Plum Fairy and Nutcracker Prince. Erica Lynnette Edwards was a standout as a whirling Russian nougat and Calvin Kitten impressed with his gravity-defying leaps in the Chinese dance.

Let me note that while the Act II set pieces tend to attract the most attention in Nutcracker, words of praise are also owed to the remarkable precision with which this company executed the “social dances’” sequence in Act I. Working in full Victorian costume on a reduced set, they flew through the complex contradance-inspired choreography with deceptive ease.

The entire cast, in short, deserves a hearty “bravi”. The ten-year-old princess in our party pronounced the production “awesome”. Who am I to disagree?

The Joffrey Nutcracker is an annual event in Chicago. Let’s hope it will continue be one here as well. Some things are traditional for good reasons. The Nutcracker speaks, ultimately, to the happy child in all of us. That’s someone we need to remember at this time of the year, especially with so many dark political and economic clouds on the horizon.

Posted by Chuck Lavazzi at 10:43 PM No comments: