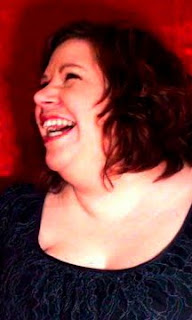 Many of the graduates of Tim Schall’s St. Louis Cabaret Conference have gone straight from there to the Kranzberg Center with their solo shows. Angie Schultz – who was in the very first conference in 2006 – took the long way around: she went through New York. Her latest show, Kiss Me Like You Mean It, premiered at Don’t Tell Mama on West 46th Street last May. Now that Jim Dolan’s Presenters Dolan organization has finally brought her home to the Kranzberg (on October 3rd and 4th) all I can say is: it’s about time!

If Mr. Schall (one of the many local performers taking a busman’s holiday to attend the show Sunday night) is looking for a poster girl for the conference, he could hardly do better than Ms. Schultz. Kiss Me Like You Mean It is very nearly the ideal show, boasting a finely balanced program of mostly newer songs, wonderful custom-tailored arrangements from pianist/music director Brett Kristofferson (including some of his own material), and performances by both Ms. Schultz and Mr. Kristofferson that were pitch-perfect – both musically and theatrically. The ease with which she graced the space and the charming, self-effacing humor which she brought to both her patter and her singing were a winning combination.

Ms. Schultz’s ability to be entirely herself on the stage is not, by the way, something to be taken lightly. As performers, so many of us spend so much time being someone else that stripping away all of the other personae and simply being ourselves can be the most difficult act of all. Combine Ms. Schultz’s comfort with her own identity with her solid, beautifully controlled vocal instrument and you have a recipe for a great night of cabaret.

Even the evening’s title is perfect, suggesting a mix of assertion and seduction that is reflected in just over a dozen songs which run the emotional gamut from John Bucchino’s touching “Unexpressed” and Ben Folds’ lovely “The Luckiest” to Jill Sobule’s demented “Mexican Wrestler” (easily one of the strangest torch songs ever written) and the always-amusing “Compromise” by Zina Goldrich and Marcy Heisler. There are also two gems of love lost from Mr. Kristofferson – “Goodbye Love” and “Things that Haunt Me” – and director Hector Coris’ hilarious send-up of American Idolatry, “My Moment”. The fact that many of these songs were new to me was yet another bonus from my point of view.

Even the older numbers, such as Arlen and Harburg’s “I Don’t Think I’ll End it All Today” (from their 1959 musical Jamaica, where it was sung by Lena Horne), were hardly warhorses. I love the Great American Songbook as well as the next cabaret addict, but it’s nice to be reminded now and then that pages are still being added to it. Ms. Schultz, Mr. Kristofferson, and Mr. Coris are to be commended for their eclectic and smart song selection.

Ms. Schultz is undoubtedly on her way back to New York by now, where she’s booked for a return appearance at Don’t Tell Mama. Her star is (to paraphrase an old vaudeville lyric) on the ascendant. Meanwhile, The Presenters Dolan continue to feature the best resident talent, with return engagements of Ken Haller’s much-praised Sondheim show October 28th and 29th and Deborah Sharn’s Life Stories on October 17th. For details, check out the web site at licketytix.com.

Posted by Chuck Lavazzi at 8:47 PM