The Joy of Dvorak 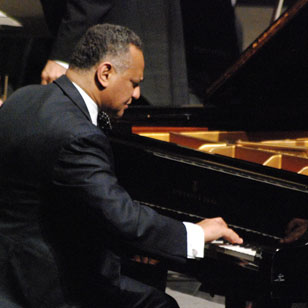 If you wanted to describe this weekend's St. Louis Symphony concert in a single word, I think that word would be joy. The joy of rock guitarist-turned-composer Steven Mackey exploiting the augmented percussion section in Turn the Key; the joy of André Watts's fluid virtuosity in the Grieg Piano Concerto; the joy Dvorak felt in the Bohemian countryside, infusing every bar of his Eighth Symphony; and the joy conductor Gilbert Varga clearly took in leading the orchestra's world-class musicians through all of it. It would take an equally world-class grouch to walk away from the final bars of Varga's Dvorak without a smile.

The evening began with something you don't see every day (as they used to say on Rocky and Bullwinkle): audience participation. The irregular rhythmic motif that forms the basis for Steven Mackey's Turn the Key is first heard clapped out by a pair of percussionists in the audience. With their encouragement, more and more of the audience join in until, with a loud dissonant chord, the orchestra announces that the professionals have taken over. It's an amusing bit of theatre and, let's face it, any time you can get the listeners clapping before the show starts, you're ahead of the game.

Originally composed for the opening of the Knight Concert Hall in Miami in 2006, Turn the Key struck me as long on orchestral flash and short on content. For me, the work's principal attraction was the creative use of just about every item in the percussion battery's arsenal, including exotic items like the lion's roar and agogo bells. This is the sort of piece that hi-fi enthusiasts once used to show off their systems many years ago (back when there were turntables, cartridges, and other Ancient Mayan sound reproduction devices), with great dynamic contrasts, interesting instrumental combinations, and playful stereo effects. It's fun, but I felt it wore out its welcome before the 11 minutes were up.

For many people, I expect, the big attraction in this concert series was the appearance of the great André Watts in Grieg's venerable Piano Concerto. That's understandable enough – Mr. Watts is unquestionably one of the Baby Boom generation's great pianists – but I would have preferred to hear him in something a little less well worn. One of Mr. Watts's early triumphs like the Saint-Saëns second or Liszt first, for example, would have been welcome.

That said, he and Mr. Varga gave an expressive performance that was rich in orchestral detail. Tempi were a bit on the slow side for my taste, which tended to emphasize the episodic nature of Grieg's writing, but on the whole it was a solid reading with a good balance between soloist and orchestra.

The real treat, though, was the Dvorak Symphony No. 8. Written at a time of great happiness in the composer's life, the symphony overflows with good humor. Dvorak composed it at his newly acquired country home and filled it with celebrations of rustic life. There are twittering birds, cheerful village bands, wandering violinists, and even, at one point, a section that has always made me think of a sudden thunderstorm. This is the joy of living, wrapped up in the Czech master's characteristically infectious melodies and dance-inspired rhythms.

The performance was simply one of the best I've heard, and that includes the classic Szell and Kertesz recordings. Conducting without a score, Mr. Varga worked the podium with the cheerfully physical intensity of someone who truly loves both his music and his musicians. His was an interpretation characterized by a wide dynamic range, well-chosen tempi, and passionate intensity.

The players responded with flawless performances. The Dvorak abounds with lovely solo passages for the winds and the orchestra's flutes, piccolo, and single and double reeds more than did them justice. Indeed, everyone seemed in tune with Mr. Varga's joy – there's that word again – in presenting this classic gem of musical optimism. A splendid time, I think, was had by all.
Posted by Chuck Lavazzi at 9:13 PM