The kindness of singers 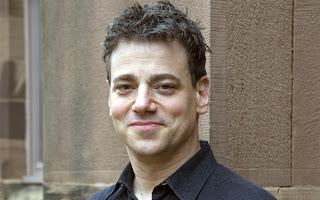 Who: Craig Rubano with Beth Ertz
What: We Can Be Kind
Where: The Presenters Dolan at the Kranzberg Center
When: March 10 - 12, 2011

About half-way through Craig Rubano’s thoughtful, innovative, and surprisingly profound new show, my wife passed me a note which read “Wouldn’t it be lovely if religion were to evoke a similar response in everyone who found it?” That’s not a typical reaction to cabaret, but then one of the many strengths of We Can be Kind is that it isn’t typical cabaret.

For that matter, Mr. Rubano is not a typical cabaret artist – assuming, of course that there can be such a thing in a genre that encompasses the work of both Barbara Cook and Varla Jean Merman. A hometown boy who went on to a career as a Broadway actor (in roles ranging from Marius in Les Misérables to Harpo in Animal Crackers) and a multiple award-winning cabaret artist, Mr. Rubano has also graduated summa cum laude from Yale in Literature and Philosophy and earned an M.A. in English and Comparative Literature from Columbia. This May he will receive a Master of Divinity degree from Princeton Theological Seminary, where he works as an editor on the school’s Dead Sea Scrolls publishing project.

But wait, there’s more! He also lives up in the mountains and raises goats, a subject on which he discourses passionately and humorously during the evening. I think it’s safe to say that’s a unique C.V. for a guy with three CDs and a MAC award to his credit. How many cabaret artists, after all, are on record as saying “I sing to make money to buy books”?

You might expect that an act assembled by someone with that kind of background would have a spiritual center and intellectual sophistication not often found in the genre and, indeed, We Can Be Kind has all that and more. The song selection was eclectic and covered a chronological range from Cohan’s 1904 hit “Give My Regards to Broadway” (to which Mr. Rubano gave added poignancy by placing it in the context of Yanks abroad yearning for home during World War II) to Peter Mayer’s 1999 “Holy Now” – which took on added layers of meaning considered in the context of Mr. Rubano’s religious awakening.

There was a comical sing-along with the traditional English “Bill Grogan’s Goat”, an inspired bi-lingual (Spanish and English) version of “The Impossible Dream” in a brilliant Flamenco-inspired arrangement by pianist and music director Beth Ertz, and an overtly anti-war set consisting of “I’ve Heard It All Before” (from the rarely-seen Shenandoah), “Empty Chairs at Empty Tables”, and “Bridge Over Troubled Water”.

I can count on the fingers of one hand the number of times I have been moved to tears at a cabaret show; that set was one of them.

There were also some American Songbook and theatre classics. A charming and relaxed take on “Make Believe” (from Showboat), for example, opened the evening, followed by an equally persuasive “Dancing in the Dark”, and the closing encore was the winsome “Just One Person” from 1976’s Snoopy: The Musical. On the whole, though, songs like David Friedman’s title number and Joni Mitchell’s “Woodstock” are more representative of the compelling mix of the personal, spiritual and political that made We Can Be Kind so remarkable.

Mr. Rubano performed all of this with light, supple baritone and wide dynamic range that have become his hallmark. His voice was, perhaps, a bit more ragged than it has been in the past but it remains a strong instrument which he used beautifully. Ms. Ertz, whose arrangements were often quite striking and original, was a sympathetic and skilled accompanist. She had a nice solo break early in the evening on “Dancing in the Dark”, but I would have enjoyed hearing more of her.

We Can Be Kind is clearly a very new show - it’s not even mentioned on Mr. Rubano’s web site - and therefore (to paraphrase Mr. Sondheim) something of an unfinished hat. In particular, Mr. Rubano needs to tighten up and more thoroughly memorize his patter. He brings a wealth of interesting insights to the music. I think a good director could help him sharpen and focus those insights. Part of the problem, I expect, is that it’s hard to fully concentrate on a show when you have divinity school exams coming up.

Cabaret is, ultimately, the most personal of performance genres. It succeeds or fails based on the talent and sincerity of the performer. Mr. Rubano has all of that, along with an impressive intellectual depth and emotional maturity. We Can Be Kind, as it was presented in St. Louis, was an awfully good show. Once he has that degree in his pocket, I expect that Mr. Rubano will make it a great one.

Next at the Kranzberg Center: a three-night stand by singer/songwriter Jimmy Webb March 17 through 19; for more information, call 314-725-4200 or visit licketytix.com on the web.
Posted by Chuck Lavazzi at 10:24 PM