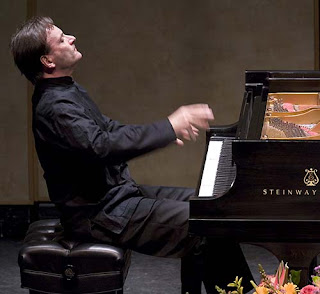 Who: Pianist Stephen Hough and The St. Louis Symphony Orchestra conducted by Hans Graf
What: Music of Rimski-Korsakov, Shostakovich, and Rachmaninoff
Where: Powell Symphony Hall, St. Louis
When: April 28 and 29, 2012

Rachmaninoff’s Second may not be the best of his four piano concerti—both the revised First and (my favorite) the Third are more economical and generate more momentum—but it’s unquestionably his most popular. Saturday night’s performance by Stephen Hough and guest conductor Hans Graf demonstrated why. The flashy (and technically demanding) solo passages, soaring melodies, and showy finale make for a real crowd pleaser, especially when delivered with such intensity and conviction.

The Second is, in some ways, more of a symphony for piano and orchestra than a traditional concerto. There are no extended cadenzas and the piano is closely integrated with the orchestra. As Laurie Shulman points out in her program notes, “Rachmaninoff entrusts most of the melodies to the large ensemble, whereas the piano takes a decorative, textural role.”

That means the orchestra had better be as good as the soloist and that both should work in perfect harmony if the piece is going to really take flight—which is exactly what Saturday’s performance did. From that famous seven-chord introduction to the big tune of the finale (popularized by Frank Sinatra in 1945 as “Full Moon and Empty Arms”), this was a Rach Second that delivered all of the composer’s goods. The orchestra was pretty near flawless and if Mr. Hough looked a bit tired at the end of the evening, I couldn’t hear any indication of that in his elegant and powerful playing. As with the Rach First on Friday morning, he and Mr. Graf were clearly in tune with each other. It was all immensely satisfying.

Also on the program were Shostakovich’s dark and acerbic Symphony No. 1, as well as the local premiere of Rimski-Korsakov’s colorful Skazka (Fairy Tale). For my thoughts on those, check out my review of the Friday morning concert. For now, I’ll just add that Skazka holds up well on a second hearing, episodic and disjointed though it may be, and the Shostakovich First remains a remarkable mix of nose-thumbing comedy and anguish.

Next at Powell Hall: The “Rach Fest” continues Saturday at 8 and Sunday at 2, April 28 and 29, with the Rachmaninoff ‘s Second Piano Concerto replacing the First. The rest of the program is the same as Friday’s. The Rach Fest concludes May 4-6 with the Piano Concerto No. 1 (Friday at 8 PM) and Piano Concerto No. 3 (Saturday at 8 and Sunday at 3). Stephen Hough is at the keyboard again with Peter Oundjian at the podium. The program for all three concerts includes Glinka’s Ruslan and Lyudmila Overture and Beethoven’s Symphony No. 5. For more information you may call 314-534-1700 or visit stlsymphony.org.
Posted by Chuck Lavazzi at 9:59 PM