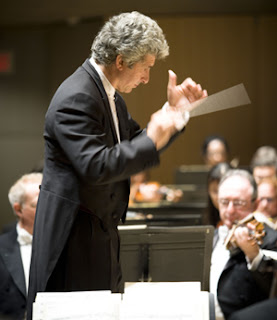 Who: Pianist Stephen Hough and The St. Louis Symphony Orchestra conducted by Peter Oundjian
What: Music of Glinka, Rachmaninoff, and Beethoven
Where: Powell Symphony Hall, St. Louis
When: May 4-6, 2012

Powell Hall was packed to the last row of the balcony Saturday night for a coruscating Rachmaninoff Third Piano Concerto with Stephen Hough (who had just performed the First Concerto the night before) earning a Purple Heart at the keyboard and a driving Beethoven 5th with Peter Oundjian at the podium. If that wasn’t the best way to end a St. Louis Symphony season then (to paraphrase the punch line of an old joke) it was way ahead of whatever’s in second place.

I’m at a loss to explain why the house was so much larger this weekend. Was it word of mouth about Mr. Hough’s impressive performances of the Rachmaninoff First and Second concerti last weekend? The presence of the Beethoven Fifth—a tried and true warhorse—on the bill? The simple fact that the last concert, like the first, is always a significant event? I don’t know the answer, but if the symphony could replicate this kind of attendance on a regular basis, all local music lovers would surely rejoice.

In any case, the capacity crowd got what they came for: an exciting evening of music making.

The Rach Third is the K2 of piano concerti. Fiercely difficult, it’s a reminder of what a prodigious pianist Rachmaninoff was. For many years after its 1909 premiere, its only real advocate was the composer himself. Even the virtuoso to whom the piece is dedicated, Josef Hofmann, never attempted to perform it in public. It wasn’t until the great Vladimir Horowitz recorded it in 1930 and began to actively promote it that it started to rise in popularity. Performances are probably more common today, but even so it’s not the sort of thing a pianist takes on lightly.

Stephen Hough, fortunately, has the combination of technique and musical sensitivity required to not only perform this remarkable piece but to make it sing as well. Sure, you need that strength and accuracy for the daunting first movement cadenza and the fireworks of the finale. But without a sense of poetry the lyrical (if not hallucinatory) flights of the second movement might, in the hands of a lesser pianist, fall flat. Despite what looked like minimal visual communication between Mr. Hough and Mr. Oundjian, it all worked beautifully Saturday night. Maybe they use telepathy.

The Third’s final movement is clearly written with an eye for the slam-bang finish, capped with the composer’s characteristic four-note signature (“Rach-man-in-OFF”), and that is certainly what we got Saturday night. The standing ovation was huge and hugely spontaneous, resulting in a lovely little encore: Federico Mompou’s "Jeunes filles au jardin" (“Young girls in the garden”) from his Scenes d’enfants.

Beethoven’s Symphony No. 5 poses its own set of difficulties. It’s so well known and has been performed so often. What does a conductor do to put his own stamp on it and make it sound fresh? Mr. Oundjian seems to have taken a leaf from the book of Roger Norrington and the other “original instrument” folks by respecting (as far as I could tell) Beethoven’s original metronome markings and conducting with a rather light hand.

The result wasn’t so much an interpretation as a realization. I wouldn’t say it was revelatory, but it did make it easier to understand why E.T.A. Hoffmann, enthusiastically reviewing the 1808 premier in the Allgemeine musikalische Zeitung, described it as "one of the most important works of the time." Last night’s was a performance that generated tremendous momentum and excitement, garnering yet another thoroughly deserved standing ovation.

The program opened with joyous reading of the overture to Glinka’s nationalist fantasy opera Ruslan and Lyudmila. It’s one of those pieces that used to crop up often as “filler” on classical LPs in Olden Times, and it still serves that function on classical radio stations. It’s also a standard at “pops” concerts, with a pair of irresistible melodies and a neat little solo tympani part guaranteed to please—as they did Saturday night.

Although this weekend’s performances marked the conclusion of the official symphony season, a number of special event concerts will be popping up at Powell Hall in May and June, including The Music of Led Zepplin on May 11, an appearance by Michael Feinstein on the 13th, and a pops concert featuring Rhapsody in Blue with Sarina Zhang at the keyboard and Ward Stare at the podium on May 18. For details on these and other “one of” events, you may visit stlsymphony.org.
Posted by Chuck Lavazzi at 7:24 PM