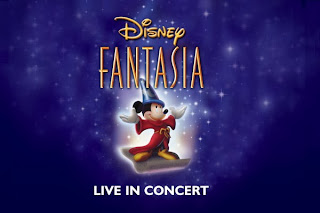 Who: The St. Louis Symphony conducted by Steven Jarvi
What: Fantasia
When: November 1-3, 2013
Where: Powell Symphony Hall

The first thing you need to know about the symphony's Fantasia program is that it was not a showing of the original 1940 film, but rather a mix of sequences from the original and the sequel, Fantasia 2000.  The second thing you need to know is that the film clips and associated musical selections were very well chosen, resulting in a nicely balanced program that effectively shows off both the Disney animators (past and present) and the virtuoso musicians of the St. Louis Symphony.

Yes, the presence of so many children in the house meant (at least the night we were there) that there was more audience noise than usual.  And the cuts and re-orchestrations in some of the music were a bit disconcerting at times.  But on the whole it was a thoroughly entertaining and worthwhile program—especially for parents looking for a way to introduce younger listeners to the classics.

Besides, the orchestra played its heart out, from intimate, beautifully executed solos to massive walls of sound. Harpist Allegra Lilly was kept particularly busy, as is pianist Peter Henderson (who doubled on celesta), but everyone sounded in top form.

This was my first opportunity to see Resident Conductor Steven Jarvi in action.  I found him to be a magnetic and physically exuberant figure on the podium.  I was also impressed by his ability to keep under control the disparate and somewhat contradictory tasks called for by conducting to a film score.  Mr. Jarvi had to do everything a conductor normally does while listening to a click track that keeps him in synch with the film—probably quite a challenge, given some of the eccentric tempo choices in Stokowski's original soundtrack.

My personal favorites included the selections from Stravinsky's Firebird that accompany a story of the coming of spring, volcanic destruction, and rebirth; the fancifully anthropomorphic flora that go with excerpts from Tchaikovsky's Nutcracker; and, of course, the slapstick comedy of The Sorcerer's Apprentice.  The program also includes Debussy's Clair de Lune, which was cut from the original Fantasia and not released it its original form until 1996.  It's a lovely little nocturnal scene in a bayou with a pair of cranes that matches the music perfectly.  I'd never seen it before.

Also on the program: the first movement of Beethoven's Symphony No. 5, the last two movements of his "Pastorale" symphony, a loopy mashup of four of Elgar's Pomp and Circumstance marches by Peter Schickele (to accompany a Noah's Ark narrative starring Donald and Daisy Duck), and most of Respighi's vivid Pines of Rome (used, inexplicably, for some fanciful animation of flying whales).  There was also an unlisted encore: the final march from Saint-Saëns's Carnival of the Animals (from Fantasia 2000), underscoring a bit of charming low comedy involving some flamingos and a yo-yo.

As with other film programs at Powell, popcorn and movie snacks were available at the bar, along with a special drink concocted for the occasion ("The Sorcerer," a tasty combination of vodka, curaçao, and pink lemonade) and you could take everything into the auditorium.  That's fortunate, because the larger than usual house meant longer than usual lines at intermission.

Next at Powell Hall: Nicholas McGegan conducts a program of Weber, Haydn, Rameau, and Mozart Friday and Saturday, November 8 and 9.  For more information: stlsymphony.org.
Posted by Chuck Lavazzi at 12:00 PM