The chord in question is called the "Tristan chord." It's heard at the very beginning of the work that opens the second half of this weekend's concerts, the Prelude to Wagner's 1857 opera "Tristan und Isolde." It sounds dissonant, even to modern ears and, in fact, many critics have pegged it as the first shot in the ongoing war on tonality in music (although just as many others dispute that idea). Certainly it seems to anticipate the expanded harmonic palette of post-Wagnerian composers like Richard Strauss and Mahler and, by extension, the active hostility to conventional notions of harmony and melody which are still more popular than they probably deserve to be in some compositional circles.

But its significance goes beyond that. What's really revolutionary about it is that it never really resolves. The tension it creates isn't fully released, in fact, until nearly four hours later when Isolde, in the rapturous "liebestod," wills herself to join her lover Tristan in death.

Does that all sound a bit Freudian? It should. The relationship between the constructive and destructive instincts in the human psyche—sex and death, Eros and Thanatos—is a central concept of Freudian psychology. Which is what makes the piece the immediately follows the "Prelude" this weekend so appropriate.

With a stream of consciousness libretto inspired by Freud's "The Interpretation of Dreams," Arnold Schoenberg's 1909 monodrama "Erwartung" ("Expectation") for soprano and orchestra unfolds as a somewhat hallucinatory monolog in which the narrator (The Woman) wanders into a nocturnal forest expecting to meet her lover and instead finds his corpse. "The line between truth and fantasy grows increasingly blurred," writes Paul Schiavo in his program notes. "Who killed her lover? Did she do it herself? The only reference point is the dramatic impulse, but the protagonist is unreliable, in thrall to her own circuitous dream logic." Schoenberg himself, in his essay "New Music: My Music," said the aim of the piece "is to represent in slow motion everything that occurs during a single second of maximum spiritual excitement, stretching it out to half an hour."

Which, in a way, brings us back to "Tristan" and its four-hour climax. 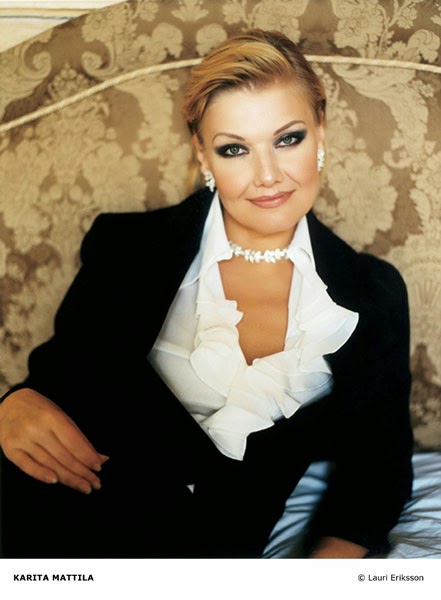 "Erwartung" is, in any case, a major challenge for the soprano soloist. Writing for The Guardian, Andrew Clements notes that the music is "immensely taxing, demanding a huge vocal range and sometimes a Wagnerian power and authority, while the huge orchestra supports and challenges her in a web of ever-shifting colours and thematic shapes presented with chamber-like transparency." It's not surprising, then, that this weekend's singer, Karita Mattila, has an impressive musical and theatrical resume, with substantial experience in the music of the 20th century and beyond. Her program bio describes her as "an influential artistic force in the development of new music, regularly collaborating with eminent contemporary composers in the debut performances of significant modern works."

This weekend's concerts open with music that is about as far away as one can get from the psychological depths of Wagner and Schoenberg. Brahms's "Symphony No. 3 in F major," Op. 90 was written in the summer of 1883 when the composer was, to quote Mr. Schiavo, "robustly healthy, if fat, and had a lust for life—as well as for young women." It bubbles over with the joy Brahms took in walking the forests and mountains around Weisbaden. He stayed there in an airy studio overlooking the Rhine, and you can almost hear that majestic river in the sweep of the opening of this music. It's wonderful stuff.

The essentials: David Robertson conducts The St. Louis Symphony Orchestra and soprano Karita Mattila in Wagner's "Prelude to Tristan and Isolde," Brahms's "Symphony No. 3," and Schoenberg's "Erwartung" on Friday and Saturday at 8 PM March 28 and 29, at Powell Symphony Hall, 718 North Grand. For more information: stlsymphony.org. The Saturday performance will be broadcast on St. Louis Public Radio, 90.7 FM, HD 1, and via live Internet stream.
Posted by Chuck Lavazzi at 12:00 PM