Brian Owens' Sam Cooke tribute is two shows in one

Who: Brian Owens
What: Sam Cooke at the Copa
Where: The Gaslight Cabaret Festival at The Gaslight Theatre, St. Louis, MO
When: March 5, 2015

Brian Owens' "Sam Cooke at the Copa," which opened the spring edition of the Gaslight Cabaret Festival, was really two shows in one.

The first and longer of the two was a faithful re-creation of the titular 1964 LP. The second show—the one with the real emotional punch—came towards the end, when Mr. Owens interrupted the LP and took a few minutes to tell us what Cooke's music meant to him and why, complete with short a cappella versions of Cooke's hits "Cupid," "Wonderful World," and "Chain Gang."

He then went back for the last three numbers from Cooke's original set, after which he brought his father up on stage for a powerful duet rendition of "A Change is Gonna Come," originally recorded by Cooke in January of 1964 but not released until after his murder in December of that year. It would go on to become an anthem for the Civil Rights movement.

The first show was a solid nightclub act, polished and entertaining. The second—especially that powerful closer—was real cabaret, with a compelling personal story and a strong emotional core. Both went over very well with the sold-out house.

Recorded in July 8, 1964, during a two-week engagement at the Copacabana nightclub in New York, "Sam Cooke at the Copa" is typical of the sort of thing black artists did back then when they played venues where the audience was mostly white. The set list mixed Great American Songbook standards with Cooke's hits and a couple of songs from what was then a hot trend: protest folk music. Cooke's own band was augmented with Joe Mele's 16-piece Copacabana Band, producing a sound somewhere between classic R&B and "big band" styles. Cooke's unique voice and personality tied it all together. 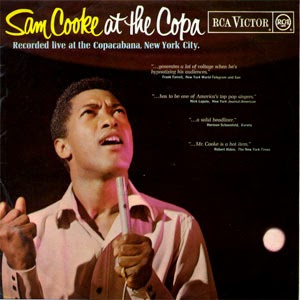 Mr. Owens used a smaller band (nine pieces) but otherwise stuck closely to the material on the LP, right down to the between-song patter. He even sounded a bit like the later Mr. Cooke, especially in his head voice and falsetto registers. What he didn't do, though, was settle for a straight celebrity impersonation. He brought his own personality to it all, so the result was more an homage than anything else.

The real Brian Owens came across most clearly, though, in that "second show" monologue and especially in "A Change is Gonna Come." Joining with his father in close harmony, Mr. Owens poured his heart into that performance in a way that demolished the "third wall" the Cooke tribute show had (unavoidably) created. Towards the end he asked the audience to sing the refrain while, one at a time, the band members stopped playing and left the stage. Finally, there was only Mr. Owens, his father, and all of us singing "I know a change is gonna come."

That, to me, was real magic.

The Gaslight Cabaret Festival runs through April 11 at the Gaslight Theater in the Central West End. For more information: gaslightcabaretfestival.com.
Posted by Chuck Lavazzi at 2:04 PM