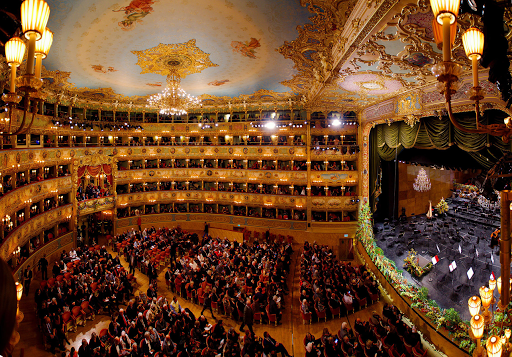 And now for something completely different: some lines from Monty Python and the Holy Grail:

Venice’s Teatro La Fenice (“The Phoenix”) opera house is built on an island rather than a swamp, but it did burn down three times (most recently in 1996).  It was rebuilt each time—the current La Fenice opened in 2004—hence its fanciful name.  It’s an opera house that has repeatedly risen from the ashes.

The real fame of La Fenice, however, comes not from its status as a survivor of incendiary disaster so much as from its importance as a source of significant operatic premieres.  Bellini, Donizetti, Verdi, and Rossini all presented major works for the first time at La Fenice.  And while Il Barbiere di Siviglia, the opera we saw at La Fenice on our third full day in Venice (Wednesday, May 31st), didn’t have its premiere there, it certainly got a splendid production that night.

But first, a few words about the opera house itself.  With its red and gold décor, ornately painted ceiling,  and its multiple ranks of box seats, La Fenice is (as you can see from the picture at the top of this article) something of the Platonic ideal of an Italian opera house. From our seats towards the back of the second rank of boxes, it was easy to imagine that we were back in the 19th century, eagerly awaiting a performance of the new comic opera version of Beaumarchais’ famous play about the antics of Figaro by the hot young composer Rossini. “They say it was all the rage when it opened in Rome,” you could imagine someone murmuring, “and that he wrote the whole thing in three weeks! Imagine that!”

The illusion was enhanced by the fact that this was a fairly traditional production—fast-paced, silly, acted with great conviction and sung brilliantly.  More importantly, it was a completely theatrical production in the very best sense of the term.  Every role was fully realized, from the leads right down to the smallest cameo parts.

The production was originally created for La Fenice back in 2002 by director Bepi Morassi, who states in his program note that  Barbiere “should be a fresco of pure theatre made up of the bravura of the individual actors bringing the work to life, and equally taking meaning from it.” He sees theatrical values as no less important than musical ones, and so  created a Barbiere that succeeded on every possible level.  Even the many bits of slapstick were beautifully choreographed to create a kind of comedic ballet.

Conductor Alessandro di Marchi led the orchestra in a spirited and impressively precise reading of Rossini’s score. His tempi were sometimes breathtakingly fast, but his cast handled event the most rapid-fire patter with ease.  The chorus sang with clarity and precision and the entire production was a joy to behold. With Rossini’s tunes still ringing in our ears, we walked quickly back to our ship on time for a 10:30 p.m. departure for our next port of call.

Posted by Chuck Lavazzi at 1:08 AM