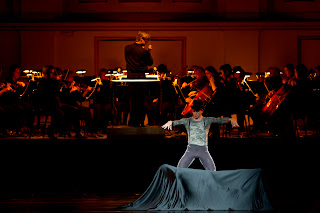 View a segment about Hubbard Street's performance from "Show Me St. Louis" on KSDK TV.

The symphony was super-sized this weekend, with a longer than usual program. The two and one-half hour concert had a decidedly Baroque/Classical/Neoclassical orientation, with music ranging chronologically from Baroque to contemporary and stylistically from Mozart to Martinů. Add in the dynamic dancing by Hubbard Street Dance Chicago and you had a pretty good bang for your entertainment buck.

I don’t know about you, but the first question that came to my mind when I learned that this weekend’s guest artists were a full ballet company was "where are they going to put everyone?" The answer is that you put the dancers on a temporary stage covering the front half of the regular stage and extending over the first row or two of seats. The orchestra is moved back and onto a platform a foot or two above the regular stage. The arrangement was ideal from our perch in the dress circle boxes and offered great sound and a clear view of the dancers.

Normally, of course, the conductor of a ballet orchestra would have the dancers above and in front of him instead of below and in back. The latter arrangement required David Robertson to frequently look over his shoulder, but both he and the musicians appeared to take it all in stride. Even with the new piece on the program—Within Her Arms by Chicago Symphony Orchestra composer in residence Anna Clyne—I saw no indication that the dancers and the orchestra weren’t always on the same page (literally or otherwise). Yet another reason why we love our St. Louis Symphony.

The program opened with an impeccably played Le nozze di Figaro overture by the orchestra alone, after which the Hubbard Street dancers, in simple deep mauve leotards, took to the stage for the first ballet, Nacho Duato’s Arcangelo. Originally created for Madrid’s Compañia Nacional de Danza in 2000, Arcangelo uses music from seven of the concerti grossi published in 1714 by one of the masters of the form, Arcangelo Corelli, along with a somber coda set to an aria (sung with great feeling by countertenor David Stephens) from Alessandro Scarlatti’s oratorio Il primo omicidio (based on the story of Cain and Abel). Mr. Duato’s choreography seamlessly blends modern and classically inspired movement—everything from a small flick of the wrist to athletic leaps—into a harmonious whole that handsomely complements the music. Until Friday morning’s concert, I didn’t know what Corelli’s music looked like. Now I do.

The first half closed with Bach’s Brandenburg Concerto No. 3 as a kind of palate cleanser. It was another fine performance, with a tip of the powdered wig to Peter Henderson’s sparkling harpsichord and concertmaster David Halen’s brief but beautiful second movement cadenza (the printed score has no second movement as such, only a single measure of two chords, so in performance a violin or harpsichord cadenza is often inserted there).

The second half opened with twice (once), in which Hubbard Street’s Rehearsal Director Terrence Marling turns Anna Clyne’s Within Her Arms—written as an elegy for the death of the composer’s mother in 2008—into a kind of balletic memory play. The fluid movement of dancers in flowing white costumes mirrored the somewhat mysterious music, which at times seemed to harken back to Vaughn Williams or even Thomas Tallis. Soloist Jessica Tong appeared to embody the spirit of the departed in a work that ends, courageously, with no music at all.

The rest is silence, to quote the dying Hamlet.

Next, another break for the dancers as the orchestra gave us Stravinsky’s 1938 homage to Bach’s Third Brandenburg, the "Dumbarton Oaks" concerto. Even though the work is from Stravinsky’s neo-classical period and therefore emotionally restrained, the composer still can’t resist some jolly writing for the winds (especially the clarinet and bassoon) and the symphony players did a fine job with it.

Bringing the concert to a brilliant close was As few as 3000 by Hubbard Street Resident Choreographer Alejandro Cerrudo, set to Bohuslav Martinů’s 1947 Toccata e due canzoni. There was so much going on here in terms of both music and dance that it was, to some extent, a case of sensory overload. Martinů’s score, with its rhythmic drive, clever reinterpretation of Baroque styles, and prominent piano part (another nod is due to Mr. Henderson there), is so interesting all by itself that it often threatened to draw focus from the dancers’ spectacular performance of Mr. Cerrudo’s inventive and often whimsical choreography. There were elements there of classic athletics—especially running and swimming—as well movement reminiscent of aquatic and insect life. There was even a mock levitation, complete with a magician in top hat and cape. Remarkable stuff, really, but it might work better with more familiar music.

To say that this program is ambitious would be an understatement. The fact that it all came off so well is a tribute to both our orchestra and Chicago’s dancers, and I congratulate them all.

Next at Powell Hall: Jaap van Zweden is on the podium along with pianist Martin Helmchen for Johan Wagenaar’s Cyrano de Bergerac Overture, Mozart’s Piano Concerto No. 25, and Brahms’s Symphony No. 4. Performances are Friday and Saturday at 8 PM and Sunday at 3 PM, February 24-26. For more information you may call 314-534-1700 or visit stlsymphony.org.
Posted by Chuck Lavazzi at 4:06 PM