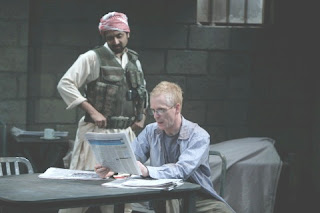 Who: The Repertory Theatre of St. Louis
What: The Invisible Hand
When: March 7 through 25, 2012
Where: The Studio Theatre at the Loretto-Hilton Center

The Rep is kicking off their Ignite! New Play Festival with the world premiere of Ayad Akhtar’s thriller The Invisible Hand. It’s an intellectual fireworks display that combines the now-familiar hostage drama with a revelatory (at least to me) lesson in 20th-century economic history. A play in which the 1944 Bretton Woods Agreements on monetary management occupy a central role might not sound like an exciting and engrossing evening of theatre but, trust me, it is.

As The Invisible Hand opens, investment banker Nick Bright (John Hickock) is being held for ransom in Pakistan by Islamic militants. Before the ten million dollars they’re demanding can be raised, however, their group is declared a terrorist organization and all negotiation ceases. Faced with the threat of execution, Nick strikes a deal with his captor, Bashir (Bhavesh Patel): he’ll give them his life savings of three million and, using the same skills that made him a major player in the financial markets, build it up to ten.

It’s a deal fraught with moral ambiguity, the depth of which does not become fully apparent until the final moments of this taut and compelling seventy-five-minute thrill ride of a play.

Mr. Akhtar’s characters are believable, well drawn, and utterly free of the stereotyping that might tempt a lesser writer. His dialog is sharp, often witty, and manages to convey complex ideas in an entertaining and entirely comprehensible way. In many respects The Invisible Hand does for international finance what Copenhagen does for nuclear physics—it turns potentially abstruse ideas into vital theatre.

The Rep’s production is as good as the script, which is saying a lot. Director Seth Gordon’s pacing in just right. His blocking and Scott C. Neale’s realistic three-quarter round set insure that every seat in the studio theatre is a good one. Rusty Wandall’s sound with its artful use of nightly news audio collages and Ann Wrightson’s spare lighting add to the effect. Video clips and a stock ticker are also used effectively during the fluid scene changes.

Mr. Hickock and Mr. Patel carry the bulk of the show’s action, and do so brilliantly. Both are always completely in the moment, nicely capturing the subtle shifts in power that Mr. Akhtar’s script has given them. They inhabit these roles with complete conviction.

There’s fine work here as well from Ahmed Hassan as Dar, whom Nick introduces to the world of free market capitalism with tragic results, and Michael James Reed as both a mutely threatening guard and the Agent (whose plot function I can’t discuss without dropping a spoiler).

For me, it’s a great evening of theatre when I leave feeling both entertained and enlightened. The Invisible Hand does both and does them awfully well. It's also a welcome antidote to the unexamined optimism of free market absolutists which, in this political climate, makes it essential. Don’t miss it.

The Invisible Hand continues at the Rep Studio Theatre through March 25. For more information, you may visit repstl.org or call 314-968-4925.
Posted by Chuck Lavazzi at 8:58 PM