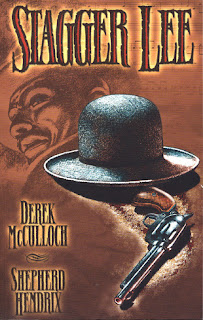 Over the next few days the Repertory Theatre of St. Louis is offering theatregoers a rare opportunity to participate in the genesis of new works for the theatre. The Ignite! New Play Festival presents staged reading of plays commissioned by the Rep. The intent is to nurture the new plays until they get to the point where they’re ready for full productions. Talkback sessions after each reading offer audience members the chance to say what they did or didn’t like and possibly influence the shape of the final piece.

The one and only fully staged production of the Ignite! festival is Ayad Akhtar’s smart thriller The Invisible Hand, which can be seen in the Rep Studio through March 25th, but the first reading—the first act of the musical Stagger Lee on Thursday, March 15th—was almost as impressive.

Based on the graphic novel of the same name (which I’d strongly recommend), Stagger Lee combines a fictional love story with the largely true tale of how Lee “Stag Lee” Shelton shot Billy Lyons in a St. Louis saloon in 1895. The killing and subsequent trial became grist for songwriters’ mills almost immediately—and still is.

The show has music by Stew and Heidi Rodewald and book and lyrics by Derek McCulloch (who also wrote the original graphic novel). The cast assembled for the reading were J. Samuel Davis, Rebecca Jones, Javier Munoz, Ken Page, Stacey Sargeant, and Paul Stovall. Amanda Dehnert directed, with musical direction by Jon Spurney.

Both Stagger Lee and the Ignite! festival show real promise. There are two more readings in the Ignite! New Play Festival on Tuesday and Wednesday, March 20 and 21; details at http://www.repstl.org/ignite
Posted by Chuck Lavazzi at 9:19 PM