TPTBT (The Place to Be Tonight): Saturday, April 20 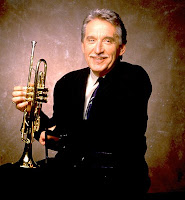 Who: Doc Severinsen and His Big Band
When: Tonight at 8 PM
Where: The Touhill Performing Arts Center
Why:  When I was a kid, The Tonight Show was hosted by Johnny Carson and Ed McMahon, and the Tonight Show Band was conducted by Skitch Henderson and then, following a brief stint with Milton DeLugg, by the band's first trumpet, Doc Severinsen.  Their approaches were different (Henderson had classical training while Severinsen was a pop and jazz musician), but they both knew what a real big band should sound like.  Since I was, at the time, playing in my high school stage band (as well as the marching band and orchestra), I loved listening to their work.  Severinsen's outlandish outfits were always good for some byplay with Carson and the two worked well together.  Severinsen retired from the Tonight Show gig in 1992 with Carson but he and his band are still touring.  Expect Ellington, Basie, big band era standards and, of course, the Tonight Show theme.
Posted by Chuck Lavazzi at 1:00 AM