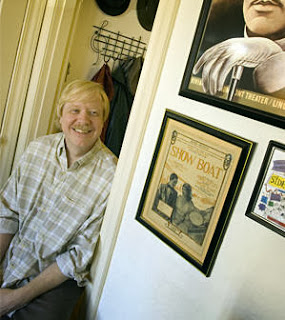 New Line Theatre has been providing St. Louisans with non-traditional musical theatre since its debut in 1991.  In recent years, the company has bee focusing on regional premieres of important new shows from both Broadway and the regional theatre circuits.

Their current season kicked off last weekend with the regional premiere of Night of the Living Dead, a musical adaptation of George Romero's classic zombie film, that has garnered raves from the local press.  88.1 KDHX's Steve Callahan says the show "is no spoof, nor is it merely an homage;  if you let it, it will lead you to think...By approaching these rather two-dimensional characters with such deep seriousness the cast leads us to consider some thoughts that make this show more than just a zombie thriller:  How fragile is peace.  How fragile is happiness.  Death, despair, catastrophe can come suddenly, with no warning."

That might not be the sort of thing most folks expect from a typical musical, but then New Line is not a typical theatre company.  I asked artistic director Scott Miller (who also directs all the shows) what makes New Line different.

Q: As its motto "the bad boy of musical theatre" indicates, New Line has made a name for itself doing new and cutting-edge work.  Was this something you set out to do from the beginning or did things just evolve that way?

A: I had been doing communuity theatre before founding New Line, and I learned a lot doing that, but I wanted to be more adventurous. I'm not sure I knew back in 1991 that New Line would be what it is today, but I knew that I wanted to go down a different road. And coincidentally, the idea of more personal, more artistic, non-commercial musical theatre was being born in New York around the same time as New Line. As New Line evolved, the musical theatre as an art form began offering us more and more of the kind of work I wanted New Line to produce.

Q: Starting a theatre company—let alone one that specializes in musicals—isn't the sort of thing most people probably think of as a career path. How did you wind up doing this?  What led you here?

A: I had two great experiences that led me to create New Line. First, I started a community theatre group during and after college with my high school drama teacher Judy Rethwisch, and so I was co-running that company for eight years before starting New Line, and I learned a lot. And also, I got a job in the office at Dance St. Louis, and so I learned arts administration close-up. That was invaluable.

Q: Quite a few small theatre companies have come and gone since New Line began two decades ago.  To what do you attribute New Line's longevity?

A: I think the key to our success it twofold. First, we have a really clear and fairly narrow identity, which we have never once betrayed, that's not like any other company in the country.. So people know who we are and what we do, and that helps with getting press coverage, selling tickets, and getting funding. The other part is our work itself. We often produce wonderful shows that no one else in the region will produce. Practically speaking that means we have very little in the way of "competition," and for people who love where our art form is heading today, New Line is where  they go to see the newest most interesting work going on in the musical theatre.

Q: What's the single most important thing you'd like someone who has never seen a New Line show to know about the company?

A: We'll never do a Rodgers and Hammerstein musical, even if someone offers us a million dollars. We do musicals for people who don't generally like musicals and for those musical theatre lovers who are excited about the future of our art form

For more information on New Line's season, visit their web site.  Aside from being the artistic director of New Line, Mr. Miller is also a published author with several books on musical theatre to his credit as well as the musical Johnny Appleweed and the play Head Games.  With singer/actress and New Line board member Deborah Sharn, he's the co-host of the theatre interview show Break a Leg on 88.1 KDHX.
Posted by Chuck Lavazzi at 10:00 PM