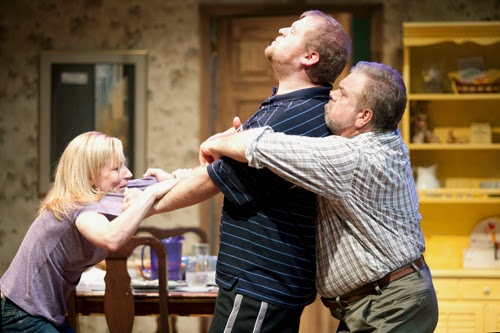 Mustard Seed Theatre presents Falling, written and directed by Deanna Jent. "Fresh from its off-Broadway run, Falling returns with the original St. Louis cast. The New York Post writes: "This heartfelt and nuanced family drama is shot through with dark humor. Falling soars!" While Falling explores hard truths within a family dealing specifically with autism, the story is really about loving someone who is hard to love." Performances take place through May 4 at the Fontbonne Fine Arts Theatre, 6800 Wydown Blvd. For more information, call (314) 719-8060 or visit the web site at www.mustardseedtheatre.com.

My take: St. Louis doesn't export that much theatre, so when it does it's worth taking notice. In his review for 88.1 KDHX, Steve Callahan says that "you can count your lucky stars that right now it is again playing in St. Louis. This is the most powerful, moving new play I've seen in years." I think you can take that to the bank, as they say.

The Fox Theatre presents the musical Once through April 20. "Winner of eight 2012 Tony Awards® including Best Musical, ONCE is a truly original Broadway experience. Featuring an impressive ensemble of actor/musicians who play their own instruments onstage, ONCE tells the enchanting tale of a Dublin street musician who's about to give up on his dream when a beautiful young woman takes a sudden interest in his haunting love songs. As the chemistry between them grows, his music soars to powerful new heights... but their unlikely connection turns out to be deeper and more complex than your everyday romance. Emotionally captivating and theatrically breathtaking, ONCE draws you in from the very first note and never lets go. It's an unforgettable story about going for your dreams... not living in fear... and the power of music to connect all of us. " The Fox Theatre is at 517 North Grand in Grand Center. For more information: fabulousfox.com.

My take: Turning popular films into musical theatre isn't a new trend (anybody remember the Burt Bacharach/Hal David/Neil Simon hit Promises, Promises from 56 years ago?) but it has certainly accelerated in recent years, and not always with salubrious results. Once seems to have gotten the approach right, though. "This beautifully staged and performed tale is bittersweet and softly played in gentle melodies and pure harmonies," writes Tina Farmer in her review for 88.1 KDHX, "with just the right mix of Irish and Czech-influenced folk traditions."

The Black Rep presents Wole Soyinka's The Trials of Brother Jero through April 27. This Nobel Prize-winning play "depicts the delightful day in the life on an evangelical con man, forced to deal with creditors, politicians, and the endless temptation of beautiful women." Performances take place at the Emerson Performance Center on the campus of Harris-Stowe State University. For more information: theblackrep.org.

My take: Once again, the Black Rep has brought us a rarely-seen show from the pen of a noted playwright—in this case Nigeria's Wole Soyinka. "This play might have come from the pen of an archaic Aristophanes," writes Steve Callahan in his review for 88.1 KDHX. "But this little play is awash in quite beautiful dance and music and ravishing African rhythms. There is African song with gorgeous harmonies. At one moment, in a frenzy of prayer, there is a shrill ululation—the most thrilling sound in the world. All of this music and dance is so exquisitely done. And it so beautifully supports the feeling of stylization—the feeling that this is an ancient folk tale." If that doesn't sound fascinating, you must be fascination proof. 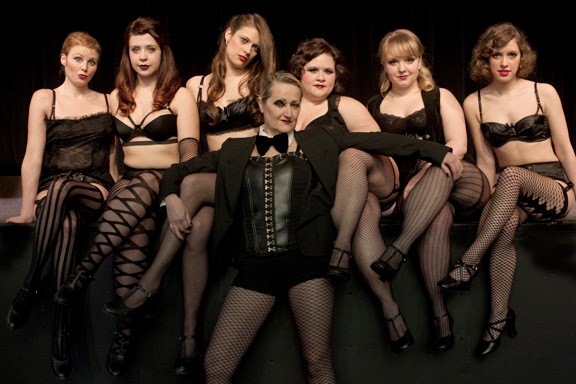 Stray Dog Theatre presents Kander and Ebb's musical Cabaret Thursdays through Saturdays at 8 PM through April 19. "The popular musical, based on British writer Christopher Isherwood’s semiautobiographical short novel Goodbye to Berlin, explores the decadence and seamy underbelly of 1930s Germany where beguiling, self-destructive chanteuse Sally Bowles lives with no thought for tomorrow. As the growing power of the Nazi’s Third Reich secretly begins to take hold, everything is thrown into disarray." Performances take place at The Tower Grove Abbey, 2336 Tennessee. For more information, visit straydogtheatre.org or call 314-865-1995.

My take: This show has gotten a lot of exposure (you should pardon the expression) lately, but it never hurts to be reminded of how easy it is for people to just go along with evil rather than stand up against it. The Stray Dog production adds a new element by basting an female actor (Lavonne Beyers) as the androgynous MC. "If you want to see this show and you should," writes Andrea Braun in her review for KDHX, "get tickets now because the first weekend was sold out before the opening. Ask about cabaret seating (the first rows of pews) with tables and service by the cast."