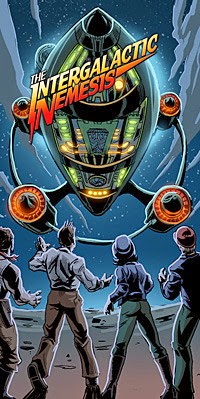 My take: Book One of the oddball theatrical mix played the Edison back in 2011. Now Book Two: Robot Planet Rising picks up the adventures the adventures of Molly, Timmy and Ben as they fight to save the world from sludge monsters from the planet Zygon. "In this Live-Action Graphic Novel three actors play all the roles, a keyboardist performs the score and a foley artist creates all the sound effects while panel after panel of graphic images are projected on video screen, transporting us all to a different reality." It sound like irresistible fun to me. Book I will be performed on Friday and Book II on Saturday.

The Presenters Dolan present Katie McGrath: Love in the Desert: Romance in the Age of Scarcity on Friday, April 4, at 8 PM as part of the Gaslight Cabaret Festival. "Nobody's better at love gone bad than Katie, who asks, "In our world economy, scarcity is the problem of having seemingly unlimited human wants and needs in a world of limited resources. But this issue is also alive and well in matters of love. Why is it then, as we age and the prospective romance population shrinks, we become needier yet more demanding than ever?" The performance takes place at the Gaslight Theater, 358 North Boyle. For more information: gaslightcabaretfestival.com.

My take: I've watched Katie develop as a cabaret performer over the years and have never failed to be impressed with her professionalism and openness on stage. This time around she has the support of the immensely talented Neal Richardson as her music director and Tim Schall as her director. This was the same team that worked with me to create my own show Just a Song at Twilight: the Golden Age of Vaudeville, so I can say from personal experience that they're a couple of the best in the business.

The Presenters Dolan present Morgan A. Faulkner: I Got it All From My Mom on Thursday, April 3, at 8 PM as part of the Gaslight Cabaret Festival. "Following her sold-out debut at New York's The Duplex, and an encore performance in Sante Fe, Morgan is thrilled to premier her One-Woman Show 'I Got It All From My Mom' here in the great state of her birth! One daughter's discovery there is humor in heartbreak, strength in weakness, and that ice cream conquers all." The performance takes place at the Gaslight Theater, 358 North Boyle. For more information: gaslightcabaretfestival.com.

My take: Morgan has done some solidly entertaining sets at the last couple of cabaret open stage nights at Tavern of the Fine Arts. If they're any indication, this should be a great show.

My take: Yes, it's a chestnut. This production, though, takes the (relatively) unusual step of casting age-appropriate actors as the teenage lovers: Leo Ramsay and Emily Jackoway. I worked with both of these kids in Winning Juliet last year with the Shakespeare Festival and they both struck me as very talented. "The intensity and passion between the two," writes Tina Farmer in her review for KDHX, "builds from the moment they meet, even their body language changes as they progress from initial attraction and flirtation to vows of eternal love."

The Repertory Theatre of St. Louis presents Michael Frayn's comedy Noises Off through April 13. “Disasters abound as a frantic, sleep-deprived touring company of actors rehearses and performs their fictional farce, Nothing On. Too many doors, too many sardines and not near enough time combine to create a riotously funny situation on and off stage for both cast and crew. Michael Frayn's intricately crafted mayhem is hailed as one of the greatest comedies ever written.” Performances take place on the mainstage at the Loretto-Hlton Center, 130 Edgar Road in Webster Groves, MO. For more information, call 314-968-4925 or visit repstl.org.

My take: Reviews for this show have been overwhelmingly positive, and with good reason. Michael Frayn's script is an ingenious, brilliantly assembled laugh machine performed with all the necessary precision by a fine ensemble cast.

New Jewish Theater presents Arthur Miller's The Price through April 16. “Everything has a price. In one of the most emotional pieces that Arthur Miller ever wrote, two estranged brothers reunite for one day to sort and sell their deceased father's "furniture," before the building is torn down. The brothers are forced to deal with the price of decisions made in their shared past.” Performances take place in the Marvin and Harlene Wool Studio Theater at the Jewish Community Center, 2 Millstone Campus Drive in Creve Coeur. For more information: www.newjewishtheatre.org or call 314-442-3283.

My take: The play is a classic and reviews have been glowing. In her review for KDHX, Tina Farmer says that this is "an artfully staged, well-acted production that fully embraces the essential themes of playwright Arthur Miller. There's layered intention in every line and the cast, with strong, purposeful direction from Bruce Longworth, does an admirable job of navigating the playwright's subtleties and inferences while avoiding excess."