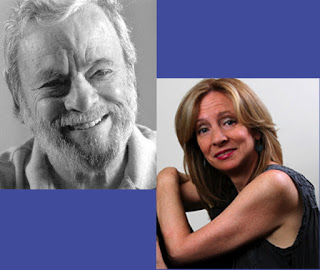 The highlight of day two of my visit to the Glimmerglass Festival as part of a team from the Music Critics Association of North America wasn't a performance at all, but rather an on-stage interview by Jamie Bernstein—writer, broadcaster, and daughter of famed Leonard Bernstein—of Stephen Sondheim, whose musical-cum-opera Sweeny Todd was the main event that night.

Casually attired in a blue polo shirt and chinos, Mr. Sondheim was wonderfully charming and unassuming. He shared some interesting insights what he sees as the differences between musical theatre and opera and had some great anecdotes about the creation of West Side Story, Gypsy, and (of course) Sweeney Todd.

Although he was addressing an opera audience, Mr. Sondheim confessed that he was not a fan of opera because he didn't personally care for "constant singing." The contrast between spoken dialog and song is, for him, far more interesting. He singled out Carmen as an opera that he enjoyed for that very reason.

He acknowledged that some musicals, such as Frank Loesser's Most Happy Fella, are rather like operas in that they are entirely sung, but they're not "through-composed". That is, they're not large musical structures like (to pick an extreme example) the operas of Wagner. So while Most Happy Fella and Sweeney Todd use repeating musical motifs, they're not really operas in his view.

That said, he noted that when Sweeney Todd performed by opera companies, it's viewed as an opera. Otherwise it's viewed as a musical. Audiences adapt their expectations to the venue.

"When I was writing Sweeney," he noted, "I was writing a movie." He was attracted to the big, exaggerated emotions of actor Christopher Bond's adaptation of the original mid-19th-centrury "penny dreadful" The String of Pearls. A stage adaptation of the original, awful though it was, became a moneymaker for actor Tod Slaughter (!), who filmed it in 1936. Mr. Sondheim, though, felt that Bond had taken the original and given it real characters with real depth-something he was careful to honor in his adaptation. He observed that sometimes inferior plays make the best operas because the music "ennobles" them. Puccini did this on a regular basis, he reminded us.

Mr. Sondheim recalled that he spent an entire month working on one song: "Epiphany", the dramatic number in which Todd, convinced that he will never have his vengeance on Judge Turpin, goes truly mad and swears bloody retribution on the entire world. The song sets up the entire second half of the show, and so was critical to its success.

Asked what he was working on now, Mr. Sondheim revealed that he's working with playwright David Ives (Venus in Fur, All in the Timing), on a stage version of two Luis Buñuel films: The Discreet Charm of the Bourgeoisie and Exterminating Angel. By sheer coincidence, composer Thomas Adès has just completed work on an opera version of the latter film, so audiences will have a chance to compare the two when they play in New York next year.

Asked about A Little Night Music, he said that he has always thought of it as an operetta. It's lighter in tone than an opera and has "an operetta attitude." He then went on to recall his meeting with Ingmar Bergman-whose film Smiles of a Summer Night served as the basis for the show-in New York City just after he had been granted the rights for the adaptation. Bergman was so pleased by Sondheim's work that he asked the composer to work with him on a film version of The Merry Widow—a project that never came to fruition. Bergman liked the Broadway production, and remarked to Sondheim that Hermione Gingold "really f**ks the audience."

And he meant it in the best way possible.

Towards the end, Ms. Bernstein and Mr. Sondheim took a few questions from the audience that had been submitted in advance. One was a rather ponderous query about how the social and political background of the 1970s had influenced the composition of Sweeney Todd. He laughed and said "I just wrote Sweeney Todd to scare people."

He also had a couple of great Ethel Merman stories.

The Sondheim interview left me primed for a great production of Sweeney Todd. Alas, that's not what I got. The many problems with director Christopher Alden's gimmicky and distracting direction are described fairly well by my colleague Barbara Jepson in her review for Classical Voice North America, so I won't repeat them here. Suffice it to say that Sweeney Todd is now apparently an Established Classic that can be subjected to bizarre directorial concepts that contradict the text and undermine the drama. Direction that constantly calls attention to itself raises barriers between the material and the audience, which is certainly what happened here.

The Glimmerglass cast has great voices, though, and Young Artists member Molly Jane Hill, a last minute substitute for an ailing Luretta Bybee, did herself proud as Mrs. Lovett. They did not, however, sound entirely comfortable with Mr. Sondheim's rapid-fire, literate lyrics-which made the projected English text very welcome.

Equally welcome was the chance to hear Sondheim's score played by a full orchestra. Conductor John DeMain gave an excellent account of it. Indeed, if you closed your eyes this was a pretty respectable production.