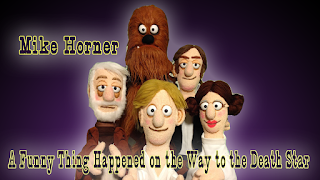 The Puppet Guild of Greater St. Louis is presenting the Great Regional Puppet Festival through Sunday, with performances by various groups at different venues in the city. You can see a complete list at puppetfestivalstl.org, but here are a few I thought look especially interesting:
The Midnight Company presents Will Eno's THOMPAIN (based on nothing) Fridays and Saturdays at 8 p.m., through August 6. Performances take place at Herbie's Vintage72, 405 N. Euclid in the Central West End, It will be a 10-year anniversary revival production for Midnight, with Artistic Director Joe Hanrahan once again the performer, and Larry Dell once again directing. "Nearly indescribable, THOMPAIN was described thus by the NYTimes: 'A surreal meditation on the empty promises life makes, the way experience never lives up to the weird and awesome fact of being...but also, in its odd, bewitching beauty an affirmation of life's worth...a small masterpiece.' Actor Joe Hanrahan calls it 'Existential Stand-Up,' while director Larry Dell describes it as 'Stand-Up Tragedy.'" Tickets will be on sale later in the spring at brownpapertickets.com.

My take: Joe Hanrahan has had something of a monopoly on the one-man show genre for many years, and with good reason. He's a skilled actor who is not afraid to take on unusual and difficult material. "Hanrahan is relaxed, comfortable in the world of the narrator, oddball as it is," writes Ann Lemmons Pollack, "pacing and gesturing and occasionally talking to specific members of the audience. He makes it look easy, creating an experience as much as he’s creating theatre." She goes on to note how much the whole experience reminds her of the early days of Gaslight Square, which ain't bad.

Union Avenue Opera presents Puccini's Tosca Fridays and Saturdays at 8 PM, through August 6. "Tosca is a powerful tale of an unholy bargain between the tragic heroine Floria Tosca and the chief of the Roman police, Baron Scarpia, arguably one of opera's vilest characters, who will stop at nothing to get his way. Will Tosca give herself to a man she hates to save Cavaradossi, the man she loves? Will she betray everything her lover believes to spare his life? Intrigue, cruelty, and betrayal swirl about the doomed diva in this riveting drama that explores the dark side of human emotion, set to some of Puccini's most passionate and unforgettable music." Performances take place at the Union Avenue Christian Church, 733 Union at Enright in the Central West End. The opera is sung in Italian with projected English text. For more information, visit unionavenueopera.org or call 314-361-2881.

My take: This production has been updated to Mussolini's Italy. Which, if you think about it, makes a fair amount of sense. The political subtext for the opera, after all, is the struggle between a democratic underground and an autocratic government that uses torture and terror as political tactics. Reviews have been very positive—Steve Callahan's for KDHX is a good example—and while I won't see the show until Friday, I see no reason to doubt their accuracy. Union Avenue has a very impressive track record.

Stages St. Louis presents the musical satire The Drowsy Chaperone through August 21. "With its laugh-a-minute script and one show-stopping song and dance number after another, it's easy to see why THE DROWSY CHAPERONE won the most Tony Awards of any musical on Broadway in 2006, including Best Book and Score. It all begins when a die-hard musical theatre fan decides to play his favorite cast album in his small brownstone apartment - a 1928 smash hit musical called "The Drowsy Chaperone." The show magically bursts to life before him as audiences are instantly transported to an earlier time and place and immersed in the glamorous and hilarious tale of a celebrity bride and her uproarious wedding day, complete with gangsters, mistaken identities, an off-course aviatrix, and an uplifting ride to the rafters. " Performances take place in the Robert G. Reim Theatre at the Kirkwood Community Center, 111 South Geyer Road in Kirkwood. For more information, visit stagesstlouis.org or call 314-821-2407.

My take: The Drowsy Chaperone is a very smart and mostly very funny parody of musical theatre and, to a certain extent, the very concept of theatre itself. It's fun to watch, and when I saw the local premiere at the Fox back in 2007 I found my appreciation of its cleverness increasing in retrospect - always a good sign. It's essentially the most elaborate in joke in living memory. I haven't seen the Stages production, but honestly it's hard to see how they could not do well by this very strong material. If you love musical theatre, you won't want to miss it.


The Muny presents the musical Fiddler on the Roof opening running nightly at 8:15 pm through Friday in the outdoor theatre in Forest Park. "A musical that celebrates family, tradition and community, Fiddler on the Roof is one of the greatest musicals ever written. This cherished musical is a poignant folk tale, laden with happiness and tears - a musical that grows more resonant with every passing year. See it with someone you love." For more information, visit muny.org or call 314-361-1900.

My take: Bock and Harnick's music is as engaging today as it was nearly fifty years ago. Joseph Stein's book, adapted from Sholem Aleichem, remains powerful. Its tragic depiction of the plight of refugees trying to hold on to their religion and culture as they are persecuted and driven from their homes ought to feel very relevant today. I haven't seen the Muny production, but the fact is this is the sort of big, old-fashioned Broadway chestnut that they usually do quite well. Besides, those actors wearing those bulky costumes in this sub-tropical heat really do deserve our support.
Posted by Chuck Lavazzi at 2:58 PM