The Fox Theatre presents The Nebraska Theatre Caravan's musical adaptation of A Christmas Carol Thursday and Friday at 7:30 PM, Saturday at 2 and 7:30 PM, and Sunday at 1 and 6 PM, December 14 - 17. "A Christmas Carol features a spirited ensemble of 23 performers who bring Dickens' fable of redemption to life on a magical set created by noted designer James Othuse. A full array of timeless carols such as "God Rest Ye Merry Gentlemen," "Away In a Manger" and "Here We Come A-Wassailing" are interwoven within the classic story of a tight-fisted, middle-class merchant Ebenezer Scrooge and all the beloved characters from Dickens' 1843 novel." The Fox is at 527 North Grand in Grand Center. For more information: fabulousfox.com.

My take: "I have always thought of Christmas time," wrote Charles Dickens in A Christmas Carol, "as a good time; a kind, forgiving, charitable, pleasant time; the only time I know of, in the long calendar of the year, when men and women seem by one consent to open their shut-up hearts freely, and to think of people below them as if they really were fellow-passengers to the grave, and not another race of creatures bound on other journeys." These days such a notion is considered politically radical, which makes partaking of the Dickens classic that much more important. Go though and enjoy. 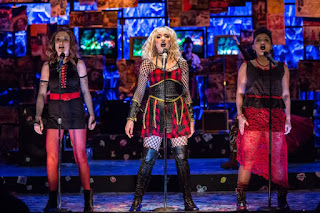 Webster University's Conservatory of Theatre Arts presents Aristophanes's comedy Lysistrata Wednesdays through Saturdays at 7:30 p.m. and Sundays at 2 p.m. through December 17. "How do you end a war that seems never ending? Aristophanes' famous play, Lysistrata, takes on this question as it centers on the lives of the soldiers' wives toward the end of the Peloponnesian War. One woman, Lysistrata, under the impression that a man's libido is ultimately his driving force in life, comes up with an interesting peace solution: to deny their husbands and lovers sexual relations until they can settle on a peace agreement that will end the war. However, Lysistrata's strategy effectively creates even more conflict than before as the sexes begin to feud with each other. Aristophanes' play is both comic, poignant, and revealing as it examines gender relations that somehow still feel relevant thousands of years later." Performances take place at the Stage III Auditorium on the Webster University campus. For more information, www.webster.edu or call 314-968-7128.

My take: While I can be a bit leery of updates of theatrical classics, this one appears to get it right. "What a romping, merry hoot!" writes Steve Callahan at KDHX. "The adaptation by Ellen McLaughlin is some eleven years old but it's wonderfully fresh and is widely produced. Director Jamie McKittrick has put together a marvelous energetic trash-punk world full of music, dance and a whole lot of hilarious talk that I could never repeat on the air." And its anti-war message is sadly still relevant.


The Repertory Theatre of St. Louis presents Miss Bennet: Christmas at Pemberly through December 24. "In this winning and witty sequel to Jane Austen's Pride and Prejudice, the bookish middle child of the Bennet family finally has her day. Constantly overshadowed by her four sisters, Mary Bennet finds hope for a new life beyond her family from an unexpected holiday romance. Austen fans and first-timers alike will find much to love in this alluring comedic tale." Performances take place at the Loretto-Hilton Center on the Webster University campus. For more information: repstl.org.

My take: Looking for a family friendly Christmas theatre treat that isn't based on Charles Dickens or Jean Shepherd? Allow me to recommend most heartily. This ingenious play by Lauren Gunderson (Silent Sky) and Margot Melcon does for Pride and Prejudice what Rosencrantz and Guildenstern Are Dead did for Hamlet by taking a minor character and thrusting her into the spotlight so that her story can be told. It's a beautifully done tribute to the values that have been at the heart of this season's celebrations for thousands of years: family, friends, light, and love. Oh, yeah: it's also funny as hell. Don't miss it.

Second Presbyterian Church presents The Secret of Christmas: A Christmas Cabaret with singers Merry Keller and Bob Becherer and pianist Ron Bryant on Sunday, December 17, at 3 pm. "Join Bob, Merry, Ron and friends for a warm, tender and fun Christmas Cabaret. You are certain to hear many of your favorite Christmas songs and will leave with a happy heart, a lighter stride in your step and joy to celebrate the holiday season." Second Presbyterian Church is at 4501 Westminster Place in the Central West Enc. For more information: www.brownpapertickets.com/event/3174143.

My take: What could be better at this time of year than seasonal favorites performed by a pair of outstanding local singers? I have known Bob and Merry for some years now from the St. Louis Cabaret Conference and other local venues. You'll be in good hands here, trust me.
Held Over:
Stray Dog Theatre presents the comedy/drama Steel Magnolias Thursdays through Saturdays through December 16. "All the ladies who are 'anybody' flock to Truvy's beauty salon where she dispenses shampoos and free advice. Filled with hilarious repartee and good ol' Southern charm, the play explores the lives of six remarkable women and the special qualities that make them truly touching, funny, and marvelously amiable company in good times and bad." Performances take place at The Tower Grove Abbey, 2336 Tennessee. For more information, visit straydogtheatre.org or call 314-865-1995.

My take: A hit on Broadway in 1987 and in cinemas in 1989, Steel Magnolias is a heartfelt tribute to the resiliency of its small town characters and to the importance of friendship in hard times. In his review for Ladue News, Mark Bretz notes that Stray Dog Artistic Director Gary Bell "directs with a sure and steady touch, maintaining the focus on Harling's fun-loving but also tender script."

Posted by Chuck Lavazzi at 5:11 PM