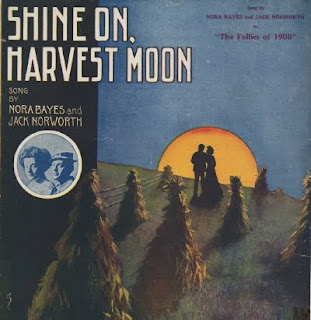 Continuing with a look backstage as we assemble my cabaret show Just a Song at Twilight...

The Norah Bayes/Jack Norworth classic “Shine On, Harvest Moon” presents a challenge. The song is so well known that a straight approach runs the risk of being boring. Granted, it has probably been years since anyone actually sang the song as written, but the music is so filled with the elements of ragtime, blues and the first stirrings of what would soon become known as jazz that I thought a more contemporary approach would be fun.

We started out with a kind of “Fever”-style walking bass for the verse but had trouble moving the idea forward in the refrain. At one point Neal shook his had and said “I can’t get out of ragtime!” Much discussion and playing around with the arrangement followed. At one point, the following exchange took place:

Neal: You know, I really feel that a kind of blues or rock approach would work. You should go back and listen to your old Bessie Smith records.
Chuck: I don’t have that many Bessie Smith records.
Tim: Chuck, you’re never going to be Bessie Smith anyway.
Chuck: True on multiple levels.
Tim: What you were kind of doing that last time around was more Al Jolson.
Neal: So maybe we need a little of both.
Tim: Yeah, we need the illegitimate love child of Al Jolson and Bessie Smith. Chuck: Well that would be….that would be Sophie Tucker.

Much merriment followed. Had we possessed custard pies, they would no doubt have been thrown.

I’m still not sure where “Harvest Moon” is going but, like Gershwin’s Porgy, it’s on its way. At our last rehearsal, it had morphed into an upbeat, jazzy number with heavy Jolson accents; I think that might be its final form.