Life is a Cabaret, Part 3 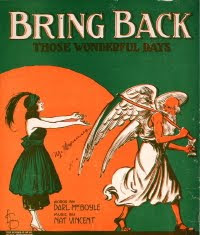 [Being the third in a series of entries chronicling the development of my cabaret show Just a Song at Twilight - The Golden Age of Vaudeville. These are companion pieces to Andrea Braun's Talking Cabaret with Chuck Lavazzi blogs at the web site for The Vital Voice. Performances are March 26 and 27, 2010; tickets at licketytix.com.]

It’s axiomatic among actors that your approach to a role inevitably changes as you perform it. In a long-running show, it’s not unusual to revise your performance as you become more comfortable with your material and with your fellow performers.

Something similar happens in the process of developing a cabaret show. You start out with an idea, a song list, and a script (“patter”) to link it all together. Once you start rehearsing the show with your music director and director, however, things start to change – often in major ways.

That’s because when you create a cabaret act you are, in effect, writing a new play starring you. That means that, in the early stages, rehearsals are as much about writing the play as they are about learning the material. At this stage, everything is subject to change.

The songs, in particular, begin the journey from their original published versions to the final customized arrangements that will mesh with the performer’s personality and the script to form a cohesive theatre piece. The music director is especially important at this point, of course, but what really happens in rehearsal is a close collaboration among the performer, music director and director.

Listening to the recoding I made of the first full rehearsal with Tim Schall (my director) and Neal Richardson (my music director), I was struck by the way we tossed ideas back and forth and how quickly our notions of what a song meant sometime changed. I'll be posting some examples in the coming days.