Life is a Cabaret, Part 2 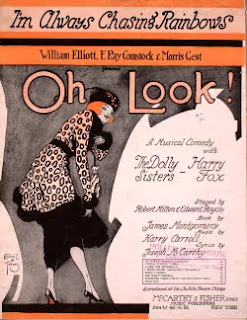 [Being the second in a series of entries chronicling the development of my cabaret show Just a Song at Twilight - The Golden Age of Vaudeville. These are companion pieces to Andrea Braun's Talking Cabaret with Chuck Lavazzi blogs at the web site for The Vital Voice. Performances are March 26 and 27, 2010; tickets at licketytix.com.]

Cartoonist Keith Knight (The Knight Life, The K Chronicles, (th)ink) has a recurring feature called Life’s Little Victories – celebrations of the little things that go right in life (e.g. “#6173 – Randomly guessing the correct answer to a trivia question”). In researching my show, I experienced a few little victories of my own.

#1 – Finding all of the sheet music you need for free on line. Some work with Google turned up several web sites (all associated with libraries) offering scans of vintage sheet music from the late 19th and early 20th centuries. The files – usually in image formats, sometimes in Adobe PDF format – were available as free downloads, enabling me to print out exact facsimiles of the original music. Simply looking at the original cover art and ads for other songs proved to be a great way to get a feel for the period.

My biggest sources here were the Lester S. Levy Collection at John Hopkins University (http://levysheetmusic.mse.jhu.edu/), Indiana University’s INHarmony collection (http://webapp1.dlib.indiana.edu/inharmony/welcome.do), and the Detroit Public Library’s Azalia Hackley Collection (http://www.thehackley.org/). I also tracked down at least one song – “The Bird on Nellie’s Hat” – at the National Library of Australia (http://www.nla.gov.au/digicoll/music.html).

The irony of using early 21st century technology to track down early 20th century resources was not lost on me.

Even more ironic, in some ways, was victory #2 – finding MP3s of thousands of Edison cylinder recordings from as early as 1890 on line, also for free. The Cylinder Digitization and Restoration project at the University of California at Santa Barbara (http://cylinders.library.ucsb.edu/) proved to be a treasure trove of vintage performances by the giants of the vaudeville era. The collection includes not only musical performances, but dramatic and comedic monologues, language instruction and even political speeches. As a window to a world now long gone, the site is priceless.

With a cabaret show, of course, finding the sheet music is only the beginning. Cabaret artists rarely, if ever, perform a song strictly as written. This is an intensely personal art form, which means that songs need to be arranged to suit the performer. And arrangement, as singer and teacher Lina Koutrakos observes, is like a custom-tailored suit. It’s designed to make the person for whom it’s designed look (or in this case, sound) as good as possible.

Which brings us to my first meetings with my musical director, Neal Richardson.

I first met Neal through the St. Louis Cabaret Conference. He was the musical director for the 2008 Alumni Showcase, at which I was performing “Take Your Girlie to the Movies” – a 1919 novelty that’s included in my current show. We quickly discovered a common love of vaudeville and ragtime-era music, so when I decided to take the plunge he was the first person I contacted. He shared my enthusiasm for the project, and so began our collaboration.

Neal, by the way, is a very busy man. In addition to being much in demand as a pianist and music director, he also teaches music theory and musicianship at Webster University, serves Samuel United Church of Christ as organist/choirmaster and is cofounder of Early Music Saint Louis. He’s also a published composer and arranger with numerous works to his credit. I consider myself lucky to have him on my team.

What does a musical director do? In general terms, he goes over your song list with you, suggests changes in song placement and/or the songs to include or exclude. He transposes music into keys better suited to a performer’s range, changes the accompaniment to suit the performer’s intent, and even acts, when necessary, as a vocal coach (and it my case, it was necessary!). A good musical director – and Neal is certainly that – can provide insights into songs that you, as a performer, might not have considered and can have a major influence on the shape of a show.

In my case, for example, two sessions with Neal resulted in a re-ordering and reduction in length of my original song list and considerable clarification of my ideas behind the show. His arrangement of the 1892 classic “After the Ball” has turned out to be the emotional heart of the show – something I hadn’t considered until we started working together.

He also dropped the keys for nearly every song. A century ago there was no such thing as a microphone, so the stars of the vaudeville stage were invariably tenors and sopranos. Higher voices are easier to hear at the back of the house. As a result, the published scores for these older songs are nearly always in keys that are not very friendly to lower voices like mine (I’m officially a bass-baritone). We lower-voice types wouldn’t come into our own until the invention of electrical recording. Bing Crosby was the first baritone to become a major star.

So after two sessions with Neal, I had a fairly solid idea of the musical shape of the show. What I didn’t have much of yet was patter – the spoken words that knit together the musical numbers and provide context.

You’d think that this would be as easy as falling off a log for someone who was been writing about music and theatre for over forty years. If so, you might want to try falling off a log some time without landing uncomfortably on what the late President Reagan would call our kiester. Writing my own show turned out to be just a little bit more complicated than I had thought.

Of which, more anon.

Posted by Chuck Lavazzi at 5:09 PM