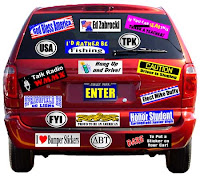 Recently on the local theatre email lists there came a pause in the day’s preoccupation with the Kevin Kline Awards to inquire about a bumper sticker seen on many cars at theatrical performances.

Now I don’t have much use for bumper stickers as a tool of persuasion. Do any of you good folks really believe, for example, that the driver doing the Creepy Crawl behind you on I-64 is going to vote yes or no on Proposition Whatever based on the one-line call to action on the rear end of your vehicle? If so, I’ve got the bridge in New York I’d love to sell you, along with several shares in the Beefsteak Mines.

For this bumper sticker, however, I’ll make an exception. It broadcasts a call to action that I can really get behind. It’s the work of local actor and independent businessman Greg Johnston and it consists of four simple words: “Go see a play”.

Now I’ll grant you that, as an actor and theatre/music critic, I’m not entirely a neutral party here. But the fact is that going to see a play – any play, by any company in any theatre – produces benefits that go far beyond simply making the performers feel that all their work was not in vain.

To begin with, the vast majority of the plays (musical or non) on St. Louis stages are entirely local productions. The actors, techies, and backstage support folks are mostly your neighbors and – considering how difficult it is to make a living from acting here in Mound City – probably your co-workers as well.

There’s also a significant economic “ripple effect”, as anyone who has ever tried to get a table at Cyrano’s after a Repertory Theater of St. Louis performance can attest. Restaurants and bars near a theatre almost always see a spike in attendance before and after the show. Add in the other stuff a theatre company has to buy locally – props, costumes, set building materials, office supplies and the like – and the impact can be significant.

Money matters aside, though, the best reason you should go see a play is that there’s nothing quite as compelling as seeing and hearing real, live, non-virtual people on stage. When it’s live and in person, comedy is more hilarious, drama is more gripping, and musical theatre has a visceral impact that the best multi-channel sound system can’t quite deliver. It’s in 3D and you don’t need special glasses.

It won’t cost you an arm, leg, or other bodily appendage, either. While a prime seat for the latest Broadway hit at the Fox might set you back a pretty (or even homely) penny, the prices at the vast majority of local live theatres are closer to those at the local googleplex cinema, and the sound is a heck of a lot better.

Of course, you don’t have to take my word for this. You can check it out yourself. Take a look at my St. Louis Theatre Calendar at calendar.stageleft.org or on this here blog to see what I mean. Or check out the Regional Arts Commission’s searchable calendar at artszipper.com. “Life upon the wicked stage” (to quote Mr. Kern’s Showboat) is alive and well in St. Louis.

So turn off your TV, shut down your PC, and go out and see a play. You’ll have a great time. And you might even be able to get one of those cool bumper stickers.
Posted by Chuck Lavazzi at 3:38 PM