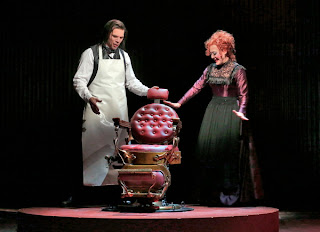 Who: Opera Theatre of St. Louis
What: Sweeney Todd, the Demon Barber of Fleet Street
Where: The Loretto-Hilton Center
When: Through June 24, 2012

If Opera Theatre of Saint Louis's Sweeny Todd isn't everything I could wish, it is (to quote an old joke) way ahead of whatever's in second place. In pretty much every way that really matters, this is (you should pardon the expression) a killer production.

I’ve been waiting for years—OK, decades—for Opera Theatre to tackle this most operatic of Sondheim’s theatre pieces. I’ve always wanted to hear this piece sung by legit opera/operetta voices. The ensemble, in particular, seems to cry out for the kind of strength and precision you get from a well-drilled operatic chorus. And I always figured OTSL’s deep pockets could deliver the kind of polished production values the show demands.

Now that the wait is over, I find that while I’m slightly disappointed with some of the show’s tech—in particular the decision to go with a mostly bare stage and a single-level set—everything else about this Sweeney Todd is so utterly compelling and theatrically on-target that I can recommend it without reservation. Whether you’re meeting the Demon Barber of Fleet Street for the first time or the tenth, this is a show that will stay with you long after the house lights have come up.

Let’s begin the catalog of this production’s strengths with praise for the stellar cast, headed by Rod Gilfry in the title role. Sweeney can be (and has been) sung brilliantly by musical theatre baritones like Len Cariou (who created the part) and George Hearn (who played it on the first tour) but there’s nothing quite like hearing a classically trained bass-baritone with a solid chest voice roll out those low notes. Mr. Gilfry is a fine actor as well, intensely focused and believably obsessed. His “Epiphany”, in which Todd finds his calling as a mass murderer, was unforgettable.

Karen Ziemba, a musical theatre actress with impressive credentials, is Todd’s partner in crime, Mrs. Lovett. When she came through St. Louis as Roxie in Chicago back in 1998, I praised her comic timing and charisma and suggested that she “could well be on her way to genuine super-star status”. Her subsequent career seems to have borne that out. Certainly her performance here is a masterpiece of comedy and connivance, with the sinuous movement of an experienced dancer thrown in for good measure. Operatic performers aren’t generally trained so well in stage movement, in my experience, so casting Ms. Ziemba was an exceptionally smart decision.

Baritone Nathaniel Hackmann and soprano Deanna Breiwick couldn’t be better as Anthony and Johanna, whose love story is the only plot thread that ends more or less happily. They’re in fine voice, completely invested in their parts.

If Opera Theatre ever decides to create their own version of The Three Tenors, they have a trio of winners in this cast. Kyle Erdos-Rapp brings a bit more depth to the role of Tobias than I have seen in other productions. His “Not While I’m Around” was especially intense, as was his final mad scene. Scott Ramsay had all the oily nastiness you’d expect as Beadle Bamford, along with a strikingly strong head voice and falsetto. His final notes in “Ladies in Their Sensitivities” could shatter glass. Anthony Webb has the same stratospheric reach as Todd’s short-lived rival, Signor Pirelli.

Bass-baritone Timothy Nolen underplays the role of the repellent Judge Turpin a bit, which ultimately makes him that much more menacing. He has a long history with the part, going back to a Great Performances broadcast in 2000, so it’s not surprising that he’s so comfortable with it. Mezzo Susanne Mentzer’s Beggar Woman has more depth than I’ve seen in the role in previous productions, so it’s a good thing that the staging gives her more prominence.

As was the case in Carmen, Robert Ainsley’s chorus sounded wonderful, with clear enunciation and a powerful, full-bodied sound. The chorus plays a prominent narrative role in Sweeney Todd, so it’s gratifying to hear it done so well. The St. Louis Symphony musicians under Stephen Lord were in fine form as well.

Director Ron Daniels has a long history with the story of Sweeney Todd. He and Christopher Bond were co-authors of the stage adaptation of the Victorian “penny dreadful” that inspired Sondheim and Wheeler to create Sweeney Todd in the first place. His work here is very effective until the final scene when he puts the chorus, still made up as lunatics from Fogg’s Asylum, on stage as mute witnesses to the final trio of murders. It draws focus and drains a bit of the scene’s horror. Up to that point, though, he seems content to stay out of Wheeler and Sondheim’s way and insure that all the comedy and drama are presented as clearly as possible.

Emily Rebholz’s “steam punk” Victorian costumes are a nice match for set designer Riccardo Hernandez’s bare bones industrial set, complete with a faux metal wall and plastic slaughterhouse curtains. My only complaint, as noted above, is that it’s all on one level. Usually Todd’s barbershop in on top of a unit with a trap door that allows his customers to be dispatched into a chute, emerging in Mrs. Lovett’s bake house. In the Opera Theatre production, bodies are flipped backwards and then clumsily hauled off by chorus members. I think it’s less effective, although your mileage may vary.

Minor complaints aside, though, Opera Theatre’s Sweeny Todd is the one that many of us have been waiting for. I’d put it right up alongside the Repertory Theatre’s production from several years ago, and that’s saying something. Performances continue through June 24th at the Loretto-Hilton Center on the Webster University campus. For more information, you may visit experienceopera.org.
Posted by Chuck Lavazzi at 5:41 PM