As seen on TV 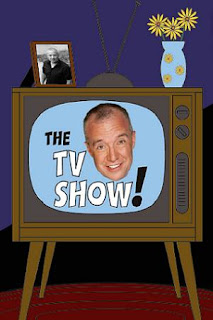 Who: The Presenters Dolan
What: Ken Haller: The TV Show
When: June 1 and 2, 2012
Where: The Kranzberg Center

[Full disclosure: I have worked on stage with Mr. Haller in the past.]

A cabaret show based on classic TV songs and themes? Like activating the Bolonium Interface Device on Star Trek, it’s a crazy idea but it just might work!

In fact, Ken Haller’s The TV Show was a very clever idea smartly executed. Rather than simply throwing together a program of TV themes peppered with “remember when” nostalgia, Mr. Haller and his director Tim Schall assembled a highly personal journey seen in the flickering blue light of the “big, enormous twelve inch screen” that was the centerpiece of so many childhood living rooms for those of us Of a Certain Age. In The TV Show, nostalgia was a means to an end rather than an end in itself.

So, for example, Mr. Haller (a pediatrician who often appears on local TV discussing children's health issues) used a set of theme songs from shows about characters with special powers (I Dream of Jeanie, Bewitched, My Favorite Martian) to reflect on how those shows resonated with his growing awareness, rushing towards puberty, of his gay sexuality. “Bein’ Green” (from Sesame Street) became a meditation on being different and accepting it while the only non-TV song in the show—“Somewhere That’s Green” from Little Shop of Horrors—led into reminiscences of growing up in suburban Hicksville on Long Island. And “Let Me Be Your Star” (from Smash) underscored a touching anecdote about how his mother, after seeing a video of his Sondheim show, turned to him and said “you really are a star!”

That’s not to say The TV Show was all touchy-feely stuff. Mr. Haller was careful not to push the confessional aspect of cabaret too far, so most of the evening was a tremendously entertaining and often extremely funny romp through TV land.

There was a medley of Barry Manilow’s commercial jingles, for example (demonstrating his early talent for writing a tune with a great hook) and a reenactment of a particularly hallucinatory segment from Gilligan’s Island in which the castaways put on a musical version of Hamlet using tunes from classic operas. My own favorite, though, was “Yakko’s World” (from Anmaniacs), which involved rattling off all the nations of the world to the tune of “The Mexican Hat Dance”. No human could possibly memorize that, of course, so Mr. Haller made a very funny bit out of reading the lyrics off 3X5 cards and tossing them around the stage a la Rip Taylor.

No Ken Haller shows would be complete without a Sondheim song, of course. He was represented here by “Take Me to the World” (from Evening Primrose, the TV special that also gave us the lovely “I Remember”), which music director Al Fischer combined in a charming medley with Rogers and Hammerstein’s “Ten Minutes Ago” (from Cinderella).

Speaking of Mr. Fischer, his voice and piano were so much a part of The TV Show that it was almost a duet act. He and Mr. Haller clearly had a solid working relationship that resulted in an easy camaraderie on stage. Mr. Schall’s work was visible throughout the evening as well in the logical flow and pacing as well as in the canny use of the Kranzberg’s limited playing space.

The TV Show is over for the time being, but given the fact that both performances were sold out, I suspect a re-run may be in the cards. If so, you'll want to catch it.
Posted by Chuck Lavazzi at 6:39 PM