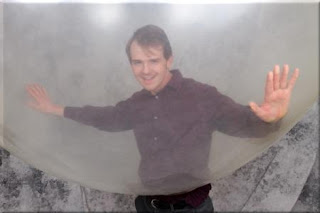 Who: The Amazing Barry
What: Almost Reality
When: June 21-24, 2012
Where: The Kranzberg Center black box at the St. Lou Fringe Festival

As some of you may know, I got my start in show biz in my teen years as a magician. I performed with a local variety troupe, joined the Society of American Magicians, and even got a trophy at an SAM convention for my comedy card act. Most of that has fallen by the wayside over the years, but I have never lost my fascination with stage magic in general and sleight of hand in particular.

I point all this out so you’ll understand that when I say that The Amazing Barry is not only an entertaining performer but a solid technician as well, y’all know I’m not just setting off flash paper.

The Amazing Barry is an informal comedy magician in the Harry Anderson mode. His entire act fits into a small brief case which doubles as a table and relies heavily on card tricks, spiked with classics like the razor–blade swallowing effect made famous by Houdini—an illusion which continues to creep me out, even though I know it’s not as dangerous as it looks.

There are also a couple of stunts. One of them—inserting himself into a giant balloon and then doing a card trick—is apparently an Amazing Barry trademark. The other—walking on broken glass in bare feet—is an old carnival standby, but still as effective as hell. Sometimes you just can’t beat the classics.

The Amazing Barry’s “Almost Reality” is an all-ages show, which means you can bring the kids and know a fine time will be had by all. If you sit in the front two rows you might end up as an on-stage volunteer and get a kiss (Hershey’s variety) from Barry as a reward.

For more information on the St. Lou Fringe Festival, including a complete performance schedule, visit stlfringe.com.
Posted by Chuck Lavazzi at 2:53 PM