For unto us a meme is born 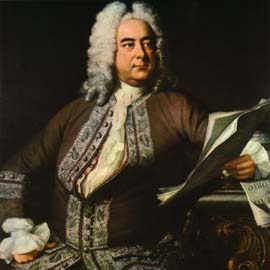 The Christmas season in upon us. For those of us keeping track of the entertainment scene, that means an inevitable encounter with at least one performance of all of the following: a stage adaptation of Dickens’s A Christmas Carol (probably with music), Tchaikovsky’s The Nutcracker, and Handel’s Messiah. In fact, we’ve already see all three here in St. Louis, including a nice Baroque-sized performance of the Handel by the St. Louis Symphony Orchestra and Chorus (see my review at 88.1 KDHX for details).

The Dickens and Tchaikovsky make perfect sense since they’re both explicitly Christmas stories. But how did Messiah get in there? It was first performed on April 13th, 1742 in Dublin, repeated that same June, and then moved to London, where it was first presented on March 23, 1743. I can’t find any evidence that the work was in any way associated with Christmas during Handel’s life. In fact, as Christopher H. Gibbs points out in his program notes for a 2007 NPR broadcast of Messiah from Philadelphia , “Handel performed it some three dozen times—every time, it should be noted, around Easter, not Christmas.” As Jonathan Kandell notes in an article for the September 2009 edition of Smithsonian, however, “[b]y the early 19th century, performances of Messiah had become an even stronger Yuletide tradition in the United States than in Britain.”

An important piece of the puzzle is supplied is supplied by Luke Howard in his program notes for a 2009 Messiah performance by UMS Choral Union:


The tradition of performing Messiah at Christmas began later in the 18th century. Although the work was occasionally performed during Advent in Dublin, the oratorio was usually regarded in England as an entertainment for the penitential season of Lent, when performances of opera were banned. Messiah’s extended musical focus on Christ’s redeeming sacrifice also makes it particularly suitable for Passion Week and Holy Week, the periods when it was usually performed during Handel’s lifetime. But in 1791, the Cæcilian Society of London began its annual Christmas performances, and in 1818 the Handel and Haydn Society of Boston gave the work’s first complete performance in the US on Christmas Day—establishing a tradition that continues to the present.


It apparently took a while for the Christmas tradition to become well established, though. As Marie Gangemil of the Oratorio Society of New York writes in her program notes for their upcoming Messiah, the first December performance by that organization didn’t take place until 1874.

But are these events sufficient to explain why the tradition became so widespread? Might there also be a supply and demand issue here? As Laurence Cummings (director of the London Handel Orchestra) observed in the Smithsonian article cited above: “There is so much fine Easter music—Bach's St. Matthew Passion, most especially—and so little great sacral music written for Christmas. But the whole first part of Messiah is about the birth of Christ."

So there you have it. Boston and New York picked up the idea from London, and the rest of the USA, seeing a chance to fill a product gap, picked it up from them. It’s a reminder that memes were spreading long before the Internet, just a lot more slowly.
Posted by Chuck Lavazzi at 8:49 PM