The St. Louis Symphony, conducted by Ware Stare, presents A Holiday Celebration Friday and Saturday at 2 and 7 PM and Sunday 2 PM, December 21-23.  Debby Boone is the featured soloist, along with the Christmas Festival Chorus, directed by Kevin McBeth.  “See why thousands of St. Louis families have made this their annual holiday tradition. Powell Hall is transformed to a magical holiday destination, complete with hot chocolate and a visit from the North Pole's most famous resident! Enjoy the STL Symphony's rendition of your favorite holiday songs making the holiday season even brighter.” I realize some serious symphony fans tend to look down on these shows, but I've alwasy found them just right for the holidays. I'd call it a guilty pleasure except that I don't feel guilty about it. Performances take place at Powell Symphony Hall, 718 North Grand. For more information: stlsymphony.org.

The Repertory Theatre of St. Louis presents the comedy The Foreigner November 28-December 23. Performances take place on the main stage at the Loretto-Hlton Center, 130 Edgar Road in Webster Groves, MO. "In this wild and wacky comedy, Charlie Baker needs to get away, and his friend Froggy knows just the place - his favorite little fishing lodge in rural Georgia. To get Charlie some much needed peace, Froggy convinces the locals that his friend doesn’t understand English. But the plan backfires when all the lodge’s inhabitants start revealing deep secrets and diabolical plans in front of their quiet foreign guest." "There are too many very funny bits to list here," noted Robert Mitchell in his review for 88.1 KDHX, "just be assured that if you want a good laugh, that there is more than enough opportunity with The Foreigner." He's right; it's a pretty near perfect production of a brilliantly constructed farce. It has been a few decades since the Rep did this fast-paced and somewhat political comedy. Sadly, the satire of Southern bigotry is still relevant. For more information, call 314-968-4925 or visit repstl.org.

Stray Dog Theatre presents the one-man comedy Fully Committed, starring Greg Fenner, Thursdays through Saturdays at 8 PM through December 22. "Hired to answer reservation calls at Manhattan’s hottest celebrity restaurant during the holiday season, an unemployed actor must handle the incessant barrage of nightmarish demands. Coercion, threats, bribes, histrionics - a cast of desperate callers will stop at nothing in their zeal to land a prime reservation, or the right table. Written by a former restaurant worker, this one-man tour-de-force is hilarious, heartfelt, and dishy!" I've seen this twice (here at the Rep and in Chicago with Bronson Pinchot) and found it vastly entertaining both times. The characters in Becky Mode's script are deftly and convincingly drawn, which raises this above the level of a simple virtuoso acting display. "We need as many laughs as we can get right now," writes Andrea Braun in her review for 88.1 KDHX, "and Stray Dog, once again, proves it is doing some of the best work in St. Louis, and Greg Fenner is totally off the chain. Bravo!" Performances take place at The Tower Grove Abbey, 2336 Tennessee. For more information, visit straydogtheatre.org or call 314-865-1995. 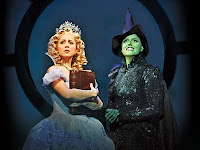 The Fox Theatre presents the Broadway musical Wicked December 12 through January 6. I haven't seen this particular tour, but in my review of the 2005 tour I noted that composer/lyricist Stephen Schwarts and book author Winnie Holtzman have done a remarkable job of simplifying and reducing the story of Gregory McGuire's original novel while still remaining true to the original characters and their relationships. The score is one of Schwartz's best, and that's saying something. In his review for 88.1 KDHX, Robert MItchell writes that Wicked "is actually better than the hype! Now, I get why it won all those Tonys, and makes stars out of its leads." The Fox Theatre is at 527 North Grand in Grand Center. For more information, call 314-534-1678.
Posted by Chuck Lavazzi at 9:22 PM