Chuck's Choices for the weekend of December 6, 2013 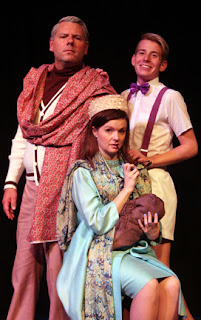 Stray Dog Theatre presents William Gibson's The Butterfingers Angel, Mary and Joseph, Herod The Nut And The Slaughter Of 12 Hit Carols In A Pear Tree Thursdays through Saturdays at 8 PM December 5-21, with an extra 2 PM matinee on the 21st. “A touching, funny, and highly imaginative retelling of the Christmas story complete with talking animals, a feminist-leaning Mary, a jealous Joseph, a fast-talking sheep, and one loud-mouthed overbearing tree. Created by one of America's major dramatists, this Christmas cartoon mixed with psychological realism brings new relevance to its timeless subject.” Performances take place at The Tower Grove Abbey, 2336 Tennessee. For more information, visit straydogtheatre.org or call 314-865-1995.

My take: Yes, that's the same William Gibson who wrote The Miracle Worker, the oft-seen play about the young Helen Keller and her teacher, Annie Sullivan. The 1975 play has gotten good notices is earlier productions, including a 2008 Washington D.C. production in which Washington Post critic Nelson Pressley was especially taken with the non-comic aspects of the script. "The dramatic passages," he wrote, "are actually quite good, right down to an unexpected image of sacrifice near the climax. Slipperier by far are Gibson's lightness and gentle humanity -- the butterfingers bits." It's nice to see something a bit left of center at the holidays, and Stray Dog can usually be relied upon to deliver the goods. 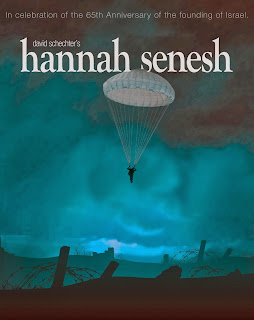 New Jewish Theater presents the one-woman show Hannah Shenesh December 5-22. The play is based on the dairies of Senesh, who worked with a British para-military group to rescue Hungarian Jews during World War II. Performances take place in the Marvin and Harlene Wool Studio Theater at the Jewish Community Center, 2 Millstone Campus Drive in Creve Coeur. For more information: www.newjewishtheatre.org or call 314-442-3283.

My take: One-person shows can be risky propositions, but this one appears to be a winner. "Last season," write Andrea Braun in her review for 88.1 KDHX, "NJT gave us 'Conviction,' a one-actor play that I thought was as good as any of that genre I'd seen. With 'Hannah Senesh,' the company has surpassed even that level of excellence in this production because of a perfect performance guided by a sensitive and meticulous director." She describes lead actress Shanara Gabrielle's performance as "magical" and says "the electricity in the room is palpable."

The West End Players Guild and the Missouri History Museum present The Medal of Honor Rag December 5-15. “ Two guilty survivors of war, a psychiatrist and an African-American soldier awarded the Congressional Medal of Honor for his service, verbally spar as they discuss the horrors that have traumatized them both.” Performances take place at The Missouri History Museum in Foreset Park. For more information: mohistory.org

My take: First performed in 1976, Medal of Honor Rag was a nominee for both the Drama Desk and Obie Awards and garnered enthusiastic reviews from critics in New York and Washington D.C. It has been a while since anyone has taken it on locally, so the current production—presented in conjunction with the History Museum's The 1968 Exhibit—is a welcome addition to the scene. Full disclosure: I'm on the board of West End Players Guild, but haven't been associated with this production in any way, 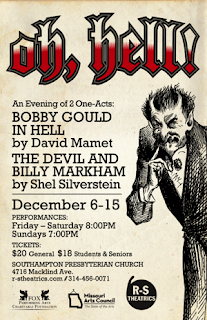 R-S Theatrics presents Oh, Hell!, an evening of two one-act plays: Bobby Gould in Hell by David Mamet and The Devil and Billy Markham by Shel Silverstein, Fridays and Saturdays at 8 PM and Sundays at 7 PM, December 6-15. In Bobby Gould in Hell, “Bobby Gould awakens in Hell's waiting room and must argue with the Interrogator in order to save himself from eternal damnation for being “cruel without being interesting.” The Devil and Billy Markham is a “one-man, 30-page monologue in rhymed couplets tells the story of Billy Markham and his long struggle to outwit the Devil for ownership of Billy's soul.” Performances take place at Southampton Presbyterian Church 5421 Murdoch. For more information: r-stheatrics.com.

My take: Well, with all the Christmas stuff popping up, somebody had to look at the season through the other end of the telescope, so to speak. I can't think of a better group to do it than R-S, where the motto is "never safe, always R-S." Besides, I'm a great fan of Shel Silverstein's work 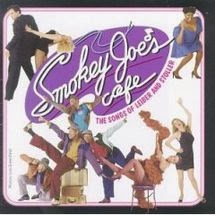 The Conservatory of Theatre Arts at Webster University presents the musical Smokey Joe's Café: The Songs of Lieber and Stoller Wednesday through Sunday, December 4-15. Performances take place in the Stage III Auditorium in Webster Hall on the Webster University campus. For more information: www.webster.edu/fine-arts/departments/conservatory/ or call 314-968-7128

My take: If you thought Lieber and Stoller were just the authors of a couple of R&B hits, this show will set you straight. Yes, there are plenty of classic rock tunes from the 50s and 60s, but these guys were far more versatile than that. Smokey Joe's Café skips their remarkable cabaret songs but even so it's a consistently entertaining showcase of their remarkable songwriting skills. The students at the conservatory have a reputation for producing polished work and this is material that should be a good mix for their youthful energy and talent.
Posted by Chuck Lavazzi at 12:00 PM