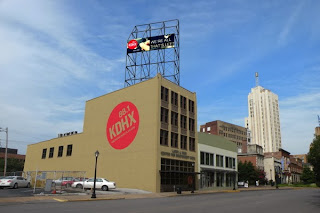 As you must undoubtedly know by now, 88.1 KDHX is moving to its new home in the Larry J. Weir Center for Independent Media at 3524 Washington (just east of The Bistro in Grand Center) later this month.  I can't tell you the exact date yet as I am sworn to secrecy (although it's coming Real Soon Now), but I can tell you the last song that will be played at the station's current Magnolia Avenue HQ.

The song, as voted by KDHX vounteer DJs, is the 1975 Emmylou Harris recording of Rodney Crowell's "Till I Gain Control Again."  It was the last song the station's late Operations Manager Larry Weir played on his "Songwriters Showcase" show before his untimely death in January of 2010—which seems only fitting.

[My own nomination—"Goodbye Magnolia" by Jimmy and the Coconuts—was greeted with a wave of indifference.  But I digress.]

The first song to be played at the new location, on the other hand, has yet to be chosen.  That's because KDHX is conducting a listener poll to determine what it will be.  They'll be collecting nominations until Friday, December 6, and voting will take place Monday, December 9, through Friday, December 13.  Surf on over to the poll page to nominate your song!

Meanwhile, take a look at a few pictures of the new digs from the volunteer training/orientation session I attended yesterday.

As you can see, KDHX now has actual offices with actual conference rooms and all the other features of a local independent business. The new building is fully networked, so that all of the broadcast and production studios and communicate with each other and exchange programming.

The Stage @ KDHX is the station's new live performance space. It can seat up to 138 and can be used for film/video events, interactive/educational functions, music, and even small theatre performances. It's equipped with state of the art lights and sound, and all performances can be recorded on audio and well as multiple-camera video.


In front of the live performance space and accessible from the street is The Magnolia Cafe, run by the fine folks at Triumph Grill.  It will be open from 7 AM to 7 PM week nights and 7 AM to 3 PM weekends (later when there's an event at The Stage).  Based on what I saw on the menu board yesterday, they'll be offering soups, salads, sandwiches, pastries and drinks both alcoholic and non.

The decor is funky and inventive.  The chandelier pictured below, for example, is constructed of jars hung from an old manual bowling alley pin setter.  One of the tables is built on a metal fire door from an movie theatre.  Very cool. 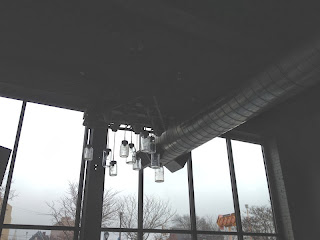 There's more to KDHX's new home, of course, including the ability to produce lots of original audio and video performances by St. Louis artists.  For more information, check out the FAQ list.  And stay tuned.  To quote Don Great's theme song for The Jeffersons, we're movin' on up.
Posted by Chuck Lavazzi at 12:00 PM