St. Louis theatre calendar for the week of December 9, 2013

[Looking for auditions and other artistic opportunities? Check out the St. Louis Auditions site.]

For information on events beyond this week, check out the searchable database at the Regional Arts Commission's ArtsZipper site.

Tesseract Theatre Company presents Wendy-Marie Martin's comedy An Almost Perfect Murder Thursday and Friday at 8 PM and Sunday at 4 PM, December 12, 13, and 15. Performances take place at the Regional Arts Commission on Delmar, across from the Pageant. For more information: tesseracttheatre.org. 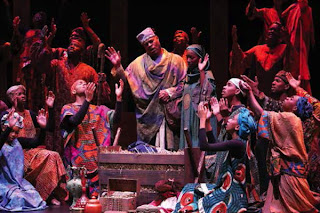 The Black Rep presents Black Nativity: A Holiday Celebration through December 22. "Conceived and directed by Ron Himes, the first act tells a moving and traditional African Nativity story, while the second act swings into the season with joy and reverence." Performances take place at the Emerson Performance Center on the campus of Harris-Stowe State University. For more information: theblackrep.org. Read the 88.1 KDHX review!

Stray Dog Theatre presents William Gibson's The Butterfingers Angel, Mary and Joseph, Herod The Nut And The Slaughter Of 12 Hit Carols In A Pear Tree Thursdays through Saturdays at 8 PM through December 1, with an extra 2 PM matinee on the 21st. “A touching, funny, and highly imaginative retelling of the Christmas story complete with talking animals, a feminist-leaning Mary, a jealous Joseph, a fast-talking sheep, and one loud-mouthed overbearing tree. Created by one of America's major dramatists, this Christmas cartoon mixed with psychological realism brings new relevance to its timeless subject.” Performances take place at The Tower Grove Abbey, 2336 Tennessee. For more information, visit straydogtheatre.org or call 314-865-1995. Read the 88.1 KDHX review!

The Pub Theater Company presents Bye Bye Liver: The St. Louis Drinking Play, a comedic romp through the joys and pitfalls of The Gateway to the West's favorite pastime. Performances take place on Saturdays at 9 PM at Maggie O'Brien's, 2000 Market Street. For more information, you may call 314-827-4185, email stlouis at byebyeliver.com, or visit byebyeliver.com/stlouis.

The Lemp Mansion Comedy-Mystery Dinner Theater presents its Christmas Show through December 31. The Lemp Mansion is at 3322 DeMenil Place. For more information: lempmansion.com 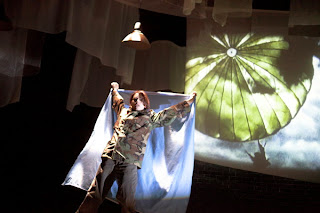 New Jewish Theater presents the one-woman show Hannah Shenesh through December 22. The play is based on the dairies of Senesh, who worked with a British para-military group to rescue Hungarian Jews during World War II. Performances take place in the Marvin and Harlene Wool Studio Theater at the Jewish Community Center, 2 Millstone Campus Drive in Creve Coeur. For more information: www.newjewishtheatre.org or call 314-442-3283. Read the 88.1 KDHX review!

Dramatic License Productions presents A Holiday Musical Revue Friday through Sunday, December 12-15. “What begins as a weekly meeting with an old professor results in a series of life lessons that Mitch, and the audience, will never forget.” Performances take place at Dramatic License Theatre located at the upper level of Chesterfield Mall (near Sears and across from Houlihan's Restaurant). For more information, call 636-220-7012 or visit dramaticlicenseproductions.org. 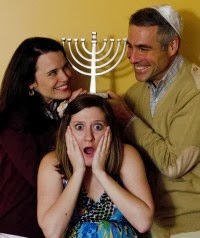 HotCity Theatre presents Kosher Lutherans by William Missouri Downs through December 21. “Hanna and Franklyn, childless Jews in L.A., find themselves in a STICKY situation on the first night of Hanukah - for this is when they first meet the innocent young woman whose baby they will be adopting, who hails from the Bible Belt and doesn't realize they're Jewish! The couple hastily pose as Lutherans to appeal to the girl's “Christian” sensibilities ... with hysterical and touching results!” Performances take place at the Kranzberg Arts Center, 501 North Grand in Grand Center. For more information, visit www.hotcitytheatre.org or call 314-289-4063. Read the 88.1 KDHX review!

The West End Players Guild and the Missouri History Museum present The Medal of Honor Rag through December 15. “ Two guilty survivors of war, a psychiatrist and an African-American soldier awarded the Congressional Medal of Honor for his service, verbally spar as they discuss the horrors that have traumatized them both.” Performances take place at The Missouri History Museum in Forest Park. For more information: mohistory.org.
Read the 88.1 KDHX review!

The Repertory Theatre of St. Louis presents Agatha Christie's The Mousetrap through December 29. “The Grande Dame of suspense weaves a clever mystery that will keep you guessing till the very end. The guests at Monkswell Manor are snowed in with a murderer in their midst. Whodunit? Sergeant Trotter is determined to find out, and his investigation turns up more shocking secrets than anyone could have anticipated. Full of intricate plot twists and shuddering suspense, it is no wonder The Mousetrap has become the world's longest-running stage production.” Performances take place at the Loretto-Hlton Center, 130 Edgar Road in Webster Groves, MO. For more information, call 314-968-4925 or visit repstl.org. Read the 88.1 KDHX review!

R-S Theatrics presents Oh, Hell!, an evening of two one-act plays: Bobby Gould in Hell by David Mamet and The Devil and Billy Markham by Shel Silverstein, Fridays and Saturdays at 8 PM and Sundays at 7 PM, through December 15. In Bobby Gould in Hell, “Bobby Gould awakens in Hell's waiting room and must argue with the Interrogator in order to save himself from eternal damnation for being “cruel without being interesting.” The Devil and Billy Markham is a “one-man, 30-page monologue in rhymed couplets tells the story of Billy Markham and his long struggle to outwit the Devil for ownership of Billy's soul.” Performances take place at Southampton Presbyterian Church 4716 Macklind. For more information: r-stheatrics.com. Read the 88.1 KDHX review!

Clayton Community Theatre presents Room at the Inn Friday and Saturday at 8 PM and Sunday at 2 PM, December 13-15. The play is “the story of a Homeless Shelter on Christmas Eve and the people who are thrown together during a terrible snow storm and the miracles, large and small, that transpire over the course of the evening.” Performances take place at the Washington University South Campus Theatre. For more information, call 314-721-9228 or visit placeseveryone.org.

The Conservatory of Theatre Arts at Webster University presents the musical Smokey Joe's Café: The Songs of Lieber and Stoller Wednesday through Sunday, through December 15. Performances take place in the Stage III Auditorium in Webster Hall on the Webster University campus. For more information: www.webster.edu/fine-arts/departments/conservatory/ or call 314-968-7128

The Rep's Imaginary Theatre Company presents The Velveteen Rabbit by Kim Esop Wylie with music and lyrics by Joe Dreyer December 14 through 23. “ Based on Margery Williams' famed literary classic, The Velveteen Rabbit tells the story of a little boy and his stuffed bunny who wonders what it means to be “real.” After years of adventure and devotion, the bunny becomes a truly beloved friend and is magically transformed into a real woodland rabbit. Join us this holiday season and share in a heartwarming musical tale that celebrates the rewards of loyalty and the wonderful, surprising power of love.” Performances take place at Heagney Theatre at Nerinx Hall High School, 530 East Lockwood Avenue in Webster Groves. For more information: repst.org or call (314) 968-4925.

The Gateway Men's Chorus opens its 27th season with Yule Tube, a holiday concert featuring favorite holiday songs from television and movies, on Friday and Saturday, December 13 and 14, at 8 PM. “Audiences will recognize music from How the Grinch Stole Christmas, White Christmas, the film adaptation of A Christmas Carol, and "The Charlie Brown Christmas Special," alongside popular holiday favorites like "All I Want for Christmas Is You," "Have Yourself a Merry Little Christmas," and "I'll Be Home for Christmas." However, the concert still promises some quirky surprises that audiences have come to expect from the Gateway Men's Chorus - including holiday parodies of hits by Queen, Journey, and even Stephen Sondheim. Plus, the concert features special performances by GMC's small ensemble Harmonix, their fabulous dance team the Foot Notes, and, of course guest appearances from Santa and Cindy Lou Who.” The concerts take place at the Edison Theatre on the Washington University campus. For more information: gmcstl.org.


Would you like to be on the radio? KDHX, 88.1 FM needs theatre reviewers. If you're 18 years or older, knowledgeable in this area, have practical theatre experience (acting, directing, writing, technical design, etc.), have good oral and written communications skills and would like to become one of our volunteer reviewers, send an email describing your experience and interests to chuck at kdhx.org. Please include a sample review of something you've seen recently.
Posted by Chuck Lavazzi at 2:10 PM