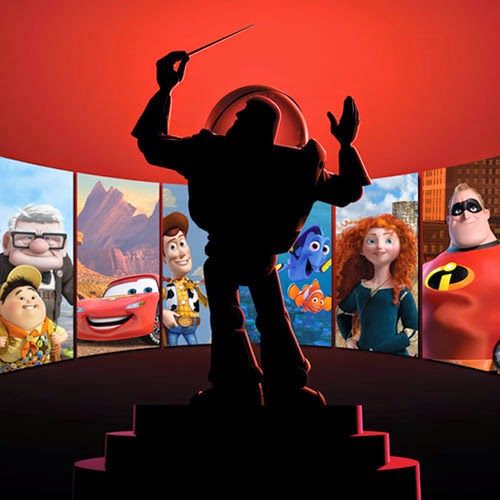 Who: The St. Louis Symphony Orchestra conducted by Steven Jarvi
What: Pixar in Concert
When: December 27 and 28, 2014
Where: Powell Symphony Hall, St. Louis

Phrases like "family entertainment" and " recommended for all ages" are far too often euphemisms for "dull and unimaginative," as though children were simply very dim adults who could only be trusted with the performing arts equivalent of plastic scissors. Fortunately, the folks at Disney/Pixar know better.

For nearly twenty years now, Pixar has been cranking out animated feature films that genuinely do appeal to all ages. They don't talk down to kids or patronize adults. They create compelling characters and weave appealing stories around them that touch on universally human themes while avoiding clichés.

And accompanying all of it is some highly imaginative music. "Pixar in Concert" (which the St. Louis Symphony presented this past weekend) combines live performances of the music from fourteen movies with montages of memorable scenes from the animated features for which the music was composed. It's a fast-paced, consistently entertaining evening that seems far shorter than its two-hour run time.

The resulting Very Big Band played with impressive precision, given the addition of so many musicians who aren't usually part of the ensemble and what I assume is a fairly short rehearsal schedule. Mr. Jarvi had a lot to hold together here, and did it remarkably well.

The music encompassed a variety of styles, from the Coplandesque Americana of Randy Newman (who scored half of the fourteen films represented) to the rock-inflected work of Thomas Newman (nephew of Randy and son of film composer Alfred Newman) for "WALL-E" and "Finding Nemo," to Patrick Doyle's celtic-flavored score for "Brave." That guaranteed enough variety to prevent the sense of déjà vu that can crop up in an evening devoted to a single film composer.

There were three generations represented in our party (ages 10 to 66) and we all had a great time. That, it seems to me, is a sign of genuine family entertainment.

Licensed by the Disney/Pixar organization, "Pixar in Concert" is a touring show that was presented by the Florida Orchestra in St. Petersburg last month and moves on to Lille, France in January. You can see the show's future bookings at the Pixar web site. Next at Powell Hall is the annual New Year's Eve Celebration on Wednesday, January 31, at 7:30 p.m. See the symphony web site for ticket information.
Posted by Chuck Lavazzi at 9:30 PM