Why is "Porgy and Bess" a classic? Lyric Opera of Chicago has the answer. 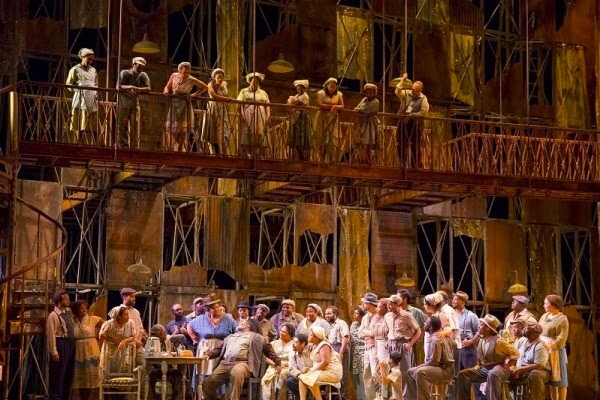 If your only exposure to George Gershwin and DuBose Heyward's 1935 opera "Porgy and Bess" has been the tour of the cut down "Broadway" version that played the Muny this past summer or even the interesting but flawed Union Avenue Opera/Black Rep co-production from 2007, you'd probably be justified in wondering why this is considered a great American opera. The current Lyric Opera of Chicago revival of its 2008 production—which runs through December 20—demonstrates why.

With masterful stage direction by Francesca Zambello (based on her original staging at Washington National Opera) and insightful musical direction by former St. Louis Symphony resident conductor Ward Stare, this is the "Porgy and Bess" that will remind you what all the fuss is about. This was especially apparent for me in the first act (consisting of Gershwin’s Act I and first two scenes of Act II), which has some of the most emotionally powerful moments in the opera. “Bess, You Is My Woman Now” was particularly poignant.

The cast is solid, with great (if sometimes under-powered) singing and utterly convincing acting. Baritone Eric Owens leads the way as a fully realized and credible Porgy. As originally written, the character can some across as a bit one-dimensional and simple, but there was none of that here. The role sometimes goes low for a baritone, but Mr. Owens still has plenty of power in the bottom of his range.

Soprano Adina Aaron’s Bess also avoids cliché, emphasizing instead the character’s vulnerability and the terrible threat posed by her addiction to Sportin’ Life’s “happy dust.” There’s not a lot a sexual chemistry between the two, but I’m not sure that’s a bad thing, as it suggests there may be a purity to her relationship with Porgy that is impossible with the brutish Crown.

Speaking of whom, baritone Eric Greene makes Crown the appalling force of nature he should be. This is a character who is all Freudian “id”—unchecked desire with no sense of control. We got all that from Mr. Greene and a powerful voice as well.

Tenor Jermaine Smith has almost made a career out of the role of the amoral drug dealer Sportin’ Life. He played the role in Lyric Opera’s 2008 production as well as in the Union Avenue production I mentioned earlier. Reviewing him back then, I praised his clear, flexible voice and dance moves that remind me that the role was, from the beginning, a kind of homage to the vaudeville stage. It’s still true.

There are many other outstanding performances here, such as soprano Karen Slack’s Serena (her “My Man’s Gone Now” was heard-rending), soprano Hlengiwe Mkhwanazi as the doomed Clara, and contralto Gwendolyn Brown’s take-no-prisoners Maria. Baritone Norman Garrett also makes a strong impression as the equally doomed Jake. In fact, there’s really not a single performance here that isn’t at least good, and many clearly qualify as great.

The chorus figures prominently in “Porgy and Bess,” but Chorus Master Michael Black’s singers are more than up to the challenge. Gershwin makes it an important character in its own right, often commenting on and participating in the action. Many scenes feature virtuoso writing for chorus members, a classic example being the Act II "storm" sequence in which six completely independent vocal lines slowly merge with the chorus to produce the spiritual "Oh, de Lawd shake the Heavens". It’s a powerful moment, powerfully delivered.

Peter J. Davison’s unit set makes the scene changes quick and fluid. Combined with Mark McCullough’s atmospheric lighting, it makes Catfish Row look rather like a decaying and abandoned prison, all rusted sheet metal and institutional ugliness, but I think that neatly makes the point that the residents are effectively imprisoned by their poverty and by the brutality of the racist power structure represented so effectively by the police and other representatives of law enforcement in Heyward’s libretto. In Gershwin’s “Porgy and Bess,” the moment a white character opens his mouth, the music stops dead. You couldn’t ask for a more stark illustration of the racial divide.

Movement and choreography are important to “Porgy and Bess” a well. Assistant director and choreographer Denni Sayers makes the dance numbers seem to emerge naturally from the rest of the stage movement, making it an integral part of the characters. In both musical theatre and opera, dance numbers can sometimes feel like (and, indeed, are often intended to be) separate set pieces, divorced from the action. Not so here.

Praise is also due to costume designer Paul Tazewell. His earthy palette nicely matches that of Mr. Davison and helps give the show a unified look.

Ward Stare conducts the orchestra with assurance and if his tempi are sometimes a bit brisk, they’re clearly not a problem for either his musicians or his singers. Mr. Stare, as I noted some years ago, is clearly a man whose star is on the ascendant. This show will certainly be another feather in his cap.

I won’t say this is a perfect “Porgy and Bess,” but it’s so close that it probably doesn’t matter. This is a difficult piece to pull off at all and opportunities to see it done this well can be rare. It continues through December 20th in the company's opulent space in the Chicago Loop and is well worth a trip to the Windy City.

Final note: I’m not a hotel critic, but if you do make the trip up here, seriously consider the place where we stayed, the Kimpton Allegro. It’s a cool little boutique hotel and only three blocks from the opera house. The adjoining 312 Chicago restaurant is worthwhile as well.
Posted by Chuck Lavazzi at 6:40 PM