New Jewish Theater presents Imaginaing Madoff through February 8. "A fantasia conjured by the playwright featuring an imagined conversation between unrepentant Ponzi schemer Bernie Madoff and Holocaust survivor, poet and investment client Solomon Galkin. In an all-night study session, these two Jewish men find themselves in a moral showdown as they banter about a myriad of subjects from baseball, to the Talmud, to human decency and the story of Abraham and Isaac. The play concerns itself with the terrible beauty and magnificent danger of absolute faith, either in God or men. As an audience, we share a sense, even to the end, that we can change what's already past. It is a moral investigation." Performances take place in the Marvin and Harlene Wool Studio Theater at the Jewish Community Center, 2 Millstone Campus Drive in Creve Coeur. For more information: www.newjewishtheatre.org or call 314-442-3283.

My take: This is the sort of thing that could become a pedantic "talking heads" exercise, but apparently both Deb Margloin's script and the NJT production avoid those pitfalls. "The attention to detail," writes Tina Farmer in her KDHX review, "both factual and fiction, ensures that the entire script feels authentic even though its centerpiece, the nightlong conversation between Galkin and Madoff, features a fictional character. Regardless, the show is a fascinating look into the minds of both Madoff and Galkin, the curiosities, passions and affronts that guided each man and caused their paths to cross and become so thoroughly entwined." 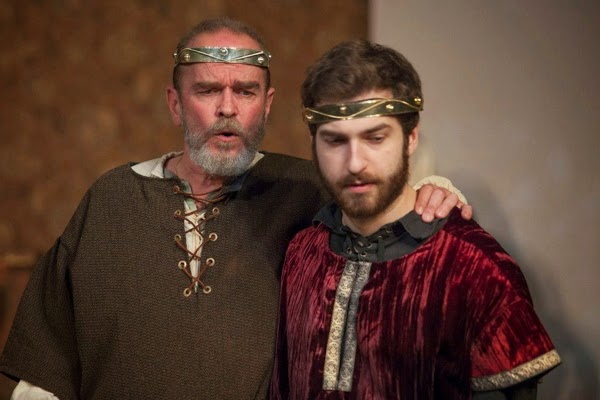 Clayton Community Theatre presents James Goldman's The Lion in Winter Fridays and Saturdays at 8 PM and Sundays at 2 PM, through February 8. "Sibling rivalry, adultery, and dungeons - Lion in Winter, by James Goldman, is a modern day classic. Comedic in tone, dramatic in action - the play tells the story of the Plantagenet family who are locked in a free for all of competing ambitions to inherit a kingdom. The queen, and wealthiest woman in the world, Eleanor of Aquitaine, has been kept in prison since raising an army against her husband, King Henry II. Let out only for holidays, the play centers around the inner conflicts of the royal family as they fight over both a kingdom, as well as King Henry's paramour during the Christmas of 1183. As Eleanor says, "every family has its ups and downs," and this royal family is no exception." Performances take place at the Washington University South Campus Theatre. For more information, call 314-721-9228 or visit placeseveryone.org.

My take: A product of the 1960s (it opened on Braodway and was the basis for a successful film adaptation in 1968), Goldman's comedy-drama refuses to become dated, possibly because the underlying issues are timeless, the characters are so well drawn, and the dialog crackles with the kind of literacy that has become far too rare in more recent plays and films. As an illustration of the danger of allowing nations to be run by dynasties, it also carries a warning that is still timely today. "Director Sam Hack," writes Bob Wildox at KDHX, "has assembled a strong cast for the Clayton Community Theatre production and has handled them well."

The Repertory Theatre of St. Louis presents Safe House through February 8. "In 1843 Kentucky, the Pedigrews hold a unique place in their community as free people of color. While one brother has dreams of opening his own business as a cobbler and creating a life for his family, the other risks everything in an effort to help slaves escape. Inspired by the lives of his ancestors, playwright Keith Josef Adkins tells a gripping and heart-wrenching story of love, freedom and survival." Performances take place in the studio theatre at the Loretto-Hlton Center, 130 Edgar Road in Webster Groves, MO. For more information, call 314-968-4925 or visit repstl.org.

My take: "Occasionally," writes Tina Farmer at KDHX, "a play sneaks up on you, grabbing you at some visceral, emotional level and knocking you down. The Studio at the Repertory Theatre of St. Louis' current production is that kind of a play. Deeply thoughtful, and grounded in history, "Safe House" challenges assumptions, providing a seldom seen glimpse of the old south, delivered in richly textured, carefully developed performances." With Confederate apologists and historical revisionists trying to whitewash (you should pardon the expression) the ugly history of slavery in America, it once again falls to the power of Art to remind us of just how great a moral cancer that institution was. This show is a nice counterpoint to the Rep's mainstage offering, "Guess Who's Coming to Dinner?"

The Repertory Theatre of St. Louis presents Guess Who's Coming to Dinner?, based on the classic film, through February 1. “A progressive couple's proud liberal sensibilities are put to the test when their daughter arrives home bursting with excitement and an unexpected fiancé. Expectations and reality collide when questions of race, fear and cultural beliefs are staring them directly in the face. A new adaptation of the award-winning film explores family and acceptance and asks which has the greater hold on our hearts.” Performances take place on the mainstage at the Loretto-Hlton Center, 130 Edgar Road in Webster Groves, MO. For more information, call 314-968-4925 or visit repstl.org.

My take: Reviews have been very positive for this show. Writing for Broadwayworld.com, for example, Chris Gibson calls it "an engaging and thoroughly entertaining theatrical experience that I cannot recommend highly enough." "Under Seth Gordon's expert direction," writes Malcom Gay at the Riverfront Times, "the Rep's cast teases the nuances from Kreidler's adaptation, delivering a powerful, immersive performance that - if not exactly challenging to an audience already won over to its essential argument - masterfully navigates the shifting waters of race, class, familial acceptance and personal responsibility as they move to overrun the narrow cultural channels that have defined them." Other critics have been equally enthusiastic. I saw the show last weekend and I agree that a winner is coming to dinner.

The Fox Theatre presents Rodgers and Hammerstein's Cinderella January 20 - February 1. "With its fresh new take on the beloved tale of a young woman who is transformed from a chambermaid into a princess, this hilarious and romantic Rodgers + Hammerstein's CINDERELLA combines the story's classic elements - glass slippers, pumpkin, and a beautiful ball along with some surprising twists. More than just a pretty face with the right shoe size, this Cinderella is a contemporary figure living in a fairytale setting. She is a spirited young woman with savvy and soul who doesn't let her rags or her gowns trip her up in her quest for kindness, compassion and forgiveness. She longs to escape the drudgery of her work at home and instead work to make the world a better place. She not only fights for her own dreams, but forces the prince to open his eyes to the world around him and realize his dreams too." The Fox is at 527 North Grand in Grand Center. For more information, fabulousfox.com.

My take: Based on Rodgers and Hammerstein's famous made-for-television musical from 1957, this retooled stage version has a new book by playwright Douglas Carter Beane (best known for his comedy As Bees in Honey Drown). "More than just a pretty face with the right shoe size" says the official press release, "this Cinderella is a contemporary figure living in a fairytale setting. She is a spirited young woman with savvy and soul who doesn't let her rags or her gowns trip her up in her quest for kindness, compassion and forgiveness. She longs to escape the drudgery of her work at home and instead work to make the world a better place. She not only fights for her own dreams, but forces the prince to open his eyes to the world around him and realize his dreams too." At Ladue News, Mark Bretz calls it "effervescent and charming" while the Post-Dispatch's Judy Newmark says it "looks like a storybook come to life."

Posted by Chuck Lavazzi at 1:26 PM