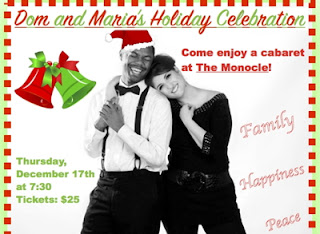 The Presenters Dolan presents Dom Thomas and Maria Bartolotta in Dom and Maria's Holiday Celebration on Thursday, December 17, at 7:30 p.m. "Come enjoy a night full of love songs and holiday cheer. Music from Nat King Cole to Barbara Streisand will surely get you in the holiday spirit!" The Monocle is at 4510 Manchester in The Grove. For more information: domthomasmusic.com.

My take: I first saw Mr. Thomas shortly after he arrived in St. Louis last year at The Cabaret Project open mic night (which I host) . He impressed me (and everyone else who has seen him) with his smooth, charming song delivery, with its echoes of the great Nat "King" Cole and other classic crooners. I heard Maria for the first time at last night's open mic, and I think the two of them will deliver an entertaining evening of holiday tunes for you.

The Monocle Varieté presents Holi-Dazzle Done Fridays and Saturdays at 9 and 11 p.m., through December 27. "Holi-Dazzle is the avant-retro variety show that will help you make it through the season that's not all fun and good cheer. Isn't it just sometimes weird, and a little crazy? And not dazzling in the right way? Get your holiday cure right here on our stage." This ninety-minute comedy show will have you rolling in the aisles with the bawdy humor of the late Joan Rivers." The performance takes place in the Emerald Room at The Monocle, 4510 Manchester in the Grove neighborhood. For more information: buzzonstage.com/st-louis

My take: Looking for something a bit more adult in terms of holiday fun? The Monocle has just the thing for you. In her review for KDHX, Tina Farmer says the show "puts a little spice into the season with a festive evening of fun among friends...The Emerald Room at The Monocle is an intimate space, with audience members seated around tables just a few feet from the stage. The close proximity makes the venue a perfect setting for a cabaret that references the glitz and glamour of old Hollywood and New York supper clubs with a touch of vaudeville."
Topper Productions presents Shana Farr in Home for the Holidays on Friday, December 18, at 7 p.m. "It has been five years since Missouri native Shana Farr came through St. Louis and this year the five-star award-winning singer comes home from New York City to sing some of her favorite holiday songs. Join her as she takes you on a journey through a "Winter Wonderland" as she shares some of the great hits such as "Sleigh Ride", "Christmas Time Is Here", "The Christmas Song", "Santa Baby", "White Christmas", "Rudolph The Red Nosed Reindeer", "Frosty The Snowman", "You're A Mean One, Mr. Grinch", "Have Yourself A Merry Little Christmas" and more." The performance takes place at Cyrano's 603 East Lockwood in Webster Groves. For more information: www.eventbee.com/v/shanafarrholiday

My take: When I reviewed Ms. Farr's first solo endeavor, Pure Imagination, back in 2010, I described it as a very intelligently crafted, beautifully sung and highly entertaining show. She's had five years of experience to build on since then, so you can probably expect great things from her this time around. A classically trained singer with a respectable theatre background, Ms. Farr has vocal technique to spare and a good sense of how to build a cabaret show.

Mustard Seed Theatre presents the a capella musical All is Calm Thursdays through Sundays through December 23. "Join us in celebrating the power of peace in this a capella musical based on the true story of soldiers during World War I who for one night, put down their arms and played soccer instead of exchanging bullets." Performances take place at the Fontbonne Fine Arts Theatre, 6800 Wydown Blvd. For more information, call (314) 719-8060 or visit the web site at www.mustardseedtheatre.com.

My take: As I say in my review, this show combines splendid and often quite complex a cappella singing with readings of letters from soldiers and other historical documents. It's powerfully moving and beautifully performed by a fine ensemble of eleven of our town's most talented singing actors. Highly recommended, especially given the current level of hateful and aggressive political rhetoric that is currently despoiling our holiday season.

New Jewish Theater presents Bad Jews through December 23. "Good Jews, Bad Jews - it's all relative in this razor sharp and savage comedy about family, faith, and legacy. Meet Daphna Feygenbaum, a "Real Jew" with an Israeli boyfriend who she met on Birthright. When Daphna's cousin Liam brings home his shiksa girlfriend Melody for their grandfather's shiva and declares ownership of "Poppy's" Chai necklace, a vicious and hilarious family brawl ensues.A gleefully funny, thought-provoking evening of theatre. Outrageously and laceratingly funny, it's about what you choose to believe when you're chosen." Rabbis Amy Feder abd Michael Alper from Temple Israel will host a talk back session after the 2 p.m. performance on Sunday, December 13. Performances take place in the Marvin and Harlene Wool Studio Theater at the Jewish Community Center, 2 Millstone Campus Drive in Creve Coeur. For more information: www.newjewishtheatre.org or call 314-442-3283.

My take: New Jewish Theater has brought some intriguing new shows to town over the years, and this one appears to be a good example. In her review for KDHX, Tina Farmer says Bad Jews is "a clever script filled with just the right levity, enabling the excellent cast to deliver a deeply evocative and thought-provoking story that sneaks up on you with surprising force."

Stray Dog Theatre presents the comedy Devil Boys from Beyond Thursdays through Saturdays at 8 PM through December 19. "Men are from Mars; women are from Venus; all the rest are from Pluto. A high-camp parody of '50s B-movies and trashy romance novels, mixed with a dash of 'Adult Swim' cartoon. Fold in a heaping portion of screwball comedy and stir gently but keep it lumpy!" Performances take place at The Tower Grove Abbey, 2336 Tennessee. For more information, visit straydogtheatre.org or call 314-865-1995.

My take: Ah, Stray Dog theatre! This small, smart local company treats is actors and its audiences like royalty and has produced some very fine work over the years. I'm a bit biased in that I've done a number of shows with them and always found the experience worthwhile, but the continued growth of their audience numbers and long string of good reviews indicate that I'm not alone in my admiration. "[T]he crisp, quick paced show," writes Tina Farmer in her review for KDHX, "is a mash up of science fiction and romantic comedy with abundant laughs, quirky characters, compromising situations, and a retro feel. To keep with the season, there's also and uplifting ending and genuine, positive messages about sexuality, gender roles, and acceptance."

St. Louis Actors' Studio presents The Gin Game through December 20 at the Gaslight Theatre, 358 North Boyle. "This winner of the 1978 Pulitzer Prize, which originally starred Jessica Tandy and Hume Cronyn and was later revived with Julie Harris and Charles Durning, uses a card game as a metaphor for life. Weller Martin is playing solitaire on the porch of a seedy nursing home. Enter Fonsia Dorsey, a prim, self righteous lady. They discover they both dislike the home and enjoy gin rummy, so they begin to play and to reveal intimate details of their lives. Fonsia wins every time and their secrets become weapons used against one another. Weller longs for a victory to counter a lifetime of defeats but it doesn't happen. He leaves the stage a broken man and Fonsia realizes her self-righteous rigidity has led to an embittered, lonely old age." For more information, call 314-458-2978 or visit stlas.org.

My take: Donald Coburn's script has been a staple of small theatre groups for a long time now, and with good reason. It's filled with great lines for two very well-drawn characters. "Similar to the game of gin itself," writes Tina Farmer at KDHX, "the story behind each of the two characters in the show is neither as simple nor straightforward as it may first appear, and neither are willing to reveal their hand too quickly. The result is a show that teeters on the line between comic and tragic, accidentally revealing truth that is at times humorous to behold, at times painful to consider."

The Fox Theatre presents the musical Wicked, based on the novel by Gregory McGuire, running through January 3. "Long before that girl from Kansas arrives in Munchkinland, two girls meet in the land of Oz. One - born with emerald green skin - is smart, fiery and misunderstood. The other is beautiful, ambitious and very popular. How these two grow to become the Wicked Witch of the West and Glinda the Good makes for 'the most complete - and completely satisfying - musical in a long time' (USA Today)." The Fox Theatre is at 517 North Grand in Grand Center. For more information, fabulousfox.com or call 314-534-1678.

My take: I haven't seen this particular tour, but in my review of the 2005 tour I noted that composer/lyricist Stephen Schwartz and book author Winnie Holtzman have done a remarkable job of simplifying and reducing the story of Gregory McGuire's original novel while still remaining true to the original characters and their relationships. The score is one of Schwartz's best, and that's saying something.

Posted by Chuck Lavazzi at 5:44 PM