Chuck's St. Louis theatre choices for the weekend of October 31, 2014 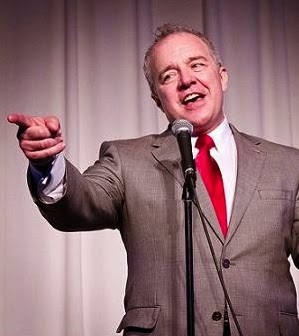 The Presenters Dolan present Ken Haller in his new show Mama's Boy on Friday and Saturday, October 30 and 31, at 8 PM as part of the Gaslight Cabaret Festival. "Ken Haller turns 60 this Halloween, and his birthday present to YOU is his long-awaited, brand new cabaret show "Mama's Boy". Ken got love of music from his Irish-Catholic mom who would sing standards while keeping house and raising five kids. You won't want to miss this heartwarming, hilarious, moving show from one of St. Louis's foremost cabaret artists!" Al Fischer is the music director and the show is directed by Tim Schall. The performance takes place at the Gaslight Theater, 358 North Boyle. For more information: gaslightcabaretfestival.com.

My take:
Yes, I have worked on stage with Mr. Haller in the past and we've known each other personally for several years now, but that doesn't change the fact that he's an immensely talented gent with impressive credentials in both the theatrical and cabaret worlds. I described his last show "The TV Show," as "a tremendously entertaining and often extremely funny romp through TV land" in my review for KDHX back in 2012, and having just seen this new one I can say without reservation that it's definitely in the same league. But don't just take my word for it. "Haller is a charming and talented performer with a voice as smooth as a brandy Alexander," wrote Robert Mitchell in a KDHX review of Mr. Haller's "Song by Song by Sondheim" show back in 2011. 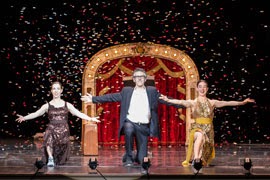 Edison Theatre Ovations! presents Three Acts, Two Dancers, One Radio Host Saturday at 8 p.m. and Sunday at 2 p.m., November 1 and 2. "This American Life host Ira Glass, with Monica Bill Barnes and Company have invented a new show that combines two art forms that -as Glass puts it-'have no business being together-dance and radio.' So what happens when you take one art form that is all words and no visuals and combine it with another art form that is all visuals and no words? You get a funny, lively and talky evening of dance and story. According to Ira Glass, 'People who like This American Life will probably like this because it is just like the radio show, um, if you picture dancers during all the stories.'" Performances take place in the Edison Theatre on the Washington University campus. For more information, call (314) 935-6543, e-mail edison at wustl.edu or visit edison.wustl.edu.

My take: I ask you, how can you not want to see a mix of dance, story telling, and radio? If I weren't otherwise engaged this weekend, I would be there. There's no reason you can't be. If you've ever heard Mr. Glass' popular NPR show, you know you can expect a unique evening of entertainment.

The Presenters Dolan present The Webster Student Showcase and Benefit on Saturday, November 1, at 8 PM as part of the Gaslight Cabaret Festival. "These Webster kids have talent, and energy and promise and ambition. At this showcase, three seniors will each perform a 20-mintue show. It's a benefit for the program at Webster -- all proceeds go towards spring auditions in NY and LA." The performance takes place at the Gaslight Theater, 358 North Boyle. For more information: gaslightcabaretfestival.com.

My take: Here's you chance to see the cabaret and musical theatre stars of tomorrow in action. I've seen a couple of these showcases in the past and have always been impressed.


New Jewish Theater presents The Diary of Anne Frank through November 2. "The iconic story of Anne Frank who hid with her family and four others in the annex of her father's factory. In this gripping and transcendently powerful new adaptation of the original story based on Anne's diary, we see Anne as a living, lyrical, intensely gifted young girl who confronts her rapidly changing life and the increasing horror of the time with astonishing honesty, wit and determination.This young girl's remarkable diary has become a testament to the human spirit and illuminates Anne's unwavering belief in justice and love. This moving, true story is essential viewing for every generation - a new adaptation for a new generation." Performances take place in the Marvin and Harlene Wool Studio Theater at the Jewish Community Center, 2 Millstone Campus Drive in Creve Coeur. For more information: www.newjewishtheatre.org or call 314-442-3283.

My take: I should note at the outset that this is a new adaptation of Anne Frank's diaries by Wendy Kesselman based on the older dramatization by Frances Goodrich and Albert Hackett that most of us have seen in the past. "The current production by The New Jewish Theatre is simply heart wrenching in its exquisite and engaging execution," writes Chris Gibson at broadwayworld.com. "A wonderful cast and sensitive direction allow this true and tragic tale to blossom fully." Other reviews have been equally effusive. At the Jewish Light, for example, Bob Cohn calls it "heart-stopping." 'Nuff said.


The Repertory Theatre of St. Louis presents Shakespeare's A Midsummer Night's Dream through November 9. "Magic, merriment and romance all unite in one of Shakespeare's most beloved and imaginative comedies. Starry-eyed lovers escape to an enchanted forest full of lust and bewitchment, where mischievous fairies play tricks, bumbling actors rehearse for a love-play and couples pursue one another, all under the light of the moon." Performances take place on the mainstage at the Loretto-Hlton Center, 130 Edgar Road in Webster Groves, MO. For more information, call 314-968-4925 or visit repstl.org.

My take: The Rep's track record with Shakespeare has been uneven over the years, but judging from Tina Farmer's review for us at KDHX, they have come up a winner this time. Director Paul Mason Barnes "admirably succeeds in creating a well-paced production that brings out both the comedy and commentary on the human condition that are inherent in this play. It is very clear that both the director and actors understand the words and intent of the script, something which is sadly lacking in many productions of Shakespeare." Chris Gibson at broadwayworld.com concurs. "If I were asked to provide the perfect introduction to the work of playwright William Shakespeare," he writes, "I would advise that person to check out The Repertory Theatre of St. Louis' current production of A Midsummer Night's Dream." My own reaction, while not as unreservedly positive, is awfully close. This "Midsummer" succeeds far more often than not, and its hits are so completely on target that they more than make up for the few misses.

Posted by Chuck Lavazzi at 5:39 PM