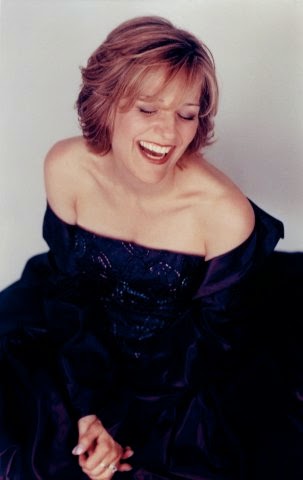 Who: Karen Mason and James Followell
What: Secrets of the Ancient Divas
When: October 17 and 18, 2014
Where: The Gaslight Cabaret Festival at the Gaslight Theater, St. Louis

What's the essence of cabaret? Partly it's what my friend Ken Haller (no mean cabaret artist himself) calls the art of telling stories through song. But equally essential, as Karen Mason's show demonstrates, are the arrangements used to tell those stories.

As someone (I think it might have been Lina Koutrakos) once noted, a cabaret artist's arrangements are like custom-tailored suits of clothes. Sure, you can wear something off the rack and look OK, but something tailored to your physique shows you off best. A good arrangement makes the most of the singer's abilities and allows him or her to put a unique personal stamp on it.

Probably the best example of this in Ms. Mason's show is the arrangement of the Judy Garland classic "The Man That Got Away" (from "A Star is Born"). Beginning with little more than some delicate discords in the right hand, James Followell's piano part becomes progressively bigger as Ms. Mason builds the volume and intensity to the lyrical climax on "the livelong night and day," after which both retreat back to those opening chords, now sounding even more bleak than they did at first. It follows the same general arc as Garland's performance in the movie, but does so in a way that pays homage to the original without imitating it.

That, my friends, is an exceptional performance of an equally exceptional arrangement. I don't know whether it's the work of Mr. Followell or of Christopher Denney, with whom she first performed "Secrets of Ancient Divas" in Chicago. Whoever it was deserves applause.

That same artistic level was apparent in the rest of the show, which pays tribute to great divas as diverse as Peggy Lee, Barbara Streisand, and Shirley Bassey without ever becoming outright impersonation. The closest Ms. Mason gets to that is her version of Bassey's "Goldfinger" ("Gooold-fingahhhhh!"), and even that is done with a sly wink. I do think, though, that it might have been even better to segue from "Diamonds Are a Girl's Best Friend" to "Diamonds Are Forever" (a better song anyway, in my view).

Along the way she weaved an amusing mock history of divadom from Roman times ("Happiness is a thing called Jove") to the present. Granted, much of that was "inside baseball," but it was clever stuff.

There were too many great moments in this show to list them all here, so I'll settle for some that struck me forcefully enough to warrant a hastily scrawled note in the dark.

"He Touched Me," from the 1965 musical flop (11 previews and eight performances) "Drat! The Cat!", got a wonderfully torchy interpretation built on a rising tide of emotion. The transitions between comedy to wistful nostalgia in Kander and Ebb's "Colored Lights" (from "The Rink") were handled with consummate skill. The "bad girl" humor of "When in Rome" and "Diamonds Are a Girl's Best Friend" came through loud and clear, but so did the longing in "Over the Rainbow."

Ms. Mason introduced her final song—"About Time," by her husband Paul Rolnick and Andrea Marcovicci's long-time music director Shelly Markham—by noting that since marriage equality has become a reality, she has become a wedding singer. It gave an added layer of meaning to the lyrics of the chorus: "It's about love. It's about life. It's about time."

It sure is. And it never hurts to remind us.

The Gaslight Cabaret Festival runs through November 22nd at the Gaslight Theater in the Central West End.  For more information, visit the web site.
Posted by Chuck Lavazzi at 12:13 PM