Romantic classics get supercharged with Leonard Slatkin and the St. Louis Symphony 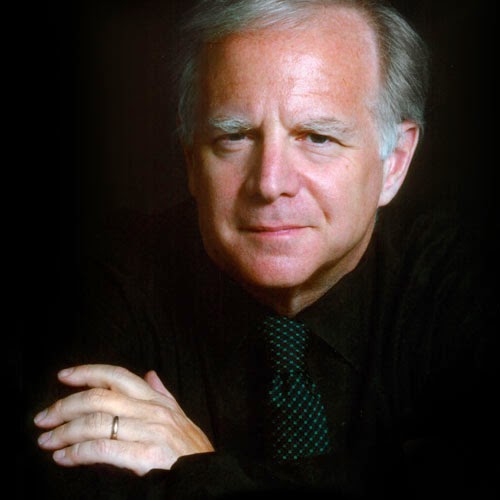 Who: The St. Louis Symphony Orchestra conducted by Leonard Slatkin with violinist David Halen
What: Music of Bruch, Berlioz, and Cindy McTee
When: October 17 and 19, 2014
Where: Powell Symphony Hall, St. Louis

This weekend brought electrifying performances of a pair of 19th century classics: Max Bruch's "Violin Concerto No. 1" and Hector Berlioz's "Symphonie Fantastique." Rounding out the concerts was a bit of old Bach wine in new bottles by Cindy McTee, whose "Double Play" was such a delightful discovery last January.

Composed about three decades apart (the Berlioz premiered in 1830, the Bruch in 1868), the two big Romantic works have little in common aside from the fact that their respective composers were around the same age (30) at their premiers.

The Bruch concerto is a warm, heartfelt, and utterly irresistible work that marries virtuoso flash with genuine emotion. The Adagio second movement, in particular, is a piece of almost heartbreaking beauty. The Berlioz, on the other hand, is a hair-raising study in dramatic excess. I dearly love both works, but the Bruch is far and away the more moving. It's rather like the difference between an action movie and a romantic drama.

The solo role in Bruch's romance requires a performer who has both solid technique and emotional depth—which is exactly what it got in this weekend's soloist, SLSO Concertmaster David Halen. He has, as I noted when he did the Mendelssohn concerto back in February of 2012, a mix of technical facility and intense concentration that pulled me in immediately and kept me there throughout the work. He attacked the dramatic entrances in the first movement with tremendous vigor, sang the lyrical second, and simply danced through the joyous Allegro energico finale. He got great support from Mr. Slatkin and the orchestra as well. The standing ovation at the end was immediate and completely justified.

"If Hector Berlioz had been born in 20th-century America instead of 19th-century France," writes Reneé Spencer Saller in her program notes, "he would have wound up in prison or a mental institution." He might also have ended up as the object of a sexual harassment suit, given his dogged pursuit of Shakespearean actress Harriet Smithson. It was his obsession with her that inspired the creation of the "Symphonie" and eventually led to their disastrous marriage—but that's another story.

The music, unlike the romantic obsession that inspired it, was a great success, although it was fiercely controversial. Parisians had just gotten used to the idea of Beethoven when along came this wildly dramatic bit of excess scored for a massive orchestra and accompanied by a lurid narrative about a young musician who dreams about his ideal woman (first movement), pursues her at a ball (second), and then flees to the country to escape his longing (third). Overdosing on opium, he dreams he is being beheaded for her murder (fourth movement) and then literally goes to Hell, where he encounters his love for the last time, now transformed into a demon and presiding over a witches' Sabbath.

To tell this wild tale, Berlioz used an orchestra that was not only large but also included instruments rarely heard in concerts, from the little E-flat clarinet to the coarse-sounding ophicleide (now usually replaced by the tuba) and tuned iron bells. He also asks the players to employ uncommon techniques, such as having the strings play col legno (with the wood of their bows instead of the strings) in the finale.

All that means that the "Symphonie Fantastique" is a real test of an orchestra's mettle, and the SLSO musicians were more than up to the challenge. There are many great solo passages throughout the work. Cally Banham, for example, was wonderfully plaintive in the famous English horn solo in the bucolic "Scène aux Champs" third movement, as was oboist Barbara Orland with the offstage echo part (played from the house right balcony). The bassoon section was wonderfully menacing in the fourth movement "Marche au suplice" and Diana Haskell's E-flat clarinet was delightfully grotesque in the fifth movement transformation of the "idée fixe" theme which represents the narrator's beloved. Flautists Mark Sparks and Ann Choomack (doubling on piccolo) also did fine work in the second movement waltz, along with harpists Allegra Lilly and Megan Stout.

Well, I could go on, but you get the idea. Up on the podium, Mr. Slatkin, conducting without a score (and, during the third movement, without a baton), brought it all together with a wonderfully sympathetic and dynamic reading that did full justice to Berlioz's high drama without ever descending into exaggeration. His decision to place key "effects" instruments (such as the fifth movement bells) offstage worked very well, I thought, and added a very appropriate theatricality to the proceedings. The final pages were both alarming and thrilling—just as Berlioz would have wished.

The concerts opened with "Einstein's Dream," a 2004 work by Cindy McTee (Mr. Slatkin's wife), apparently a late substitution for the originally scheduled opener, Slatkin's own "Endgames" (which will have its world premiere with the Detroit Symphony in November). "Albert Einstein," writes the composer on her web site, "gave much thought to issues of space and time, and he dreamt of finding a theory of everything, or a broad, mathematical structure that would fully explain and link together all known phenomena. My piece celebrates this dream."

That celebration takes the form of a set of variations for strings, percussion, and recorded sound on the Bach chorale prelude "Wir glauben all’ an einen Gott" ("We all believe in one God"), "transposed," as Ms. McTee notes, "to the key of 'e' for Einstein." The theme is initially stated by the strings in the first section ("Warps and Curves in the Fabric of Space and Time") and then subjected to increasingly complex transformations in each of the following six sections.

In "Music of the Spheres," for example, the theme is played by the high strings over a pedal point in the cellos and basses while in the "Celestial Bells" live tubular bells are accompanied by recorded bell-like sounds and Ligeti-ish clusters in the strings. The leaping violin solo in "Pondering the Behavior of Light" (expertly played by Celeste Golden Boyer) is a homage to Einstein's own violin playing. In the final section, "Wondering at the Secrets," notes of the theme are slowed down and overlapped in a technique the composer calls "time-stretching." "What most intrigued me about musical time-stretching," she writes, "was its ability to shift the listener’s attention toward the inner components of the sound – the harmonics and the overlapping resonant regions – as if inviting a kind of meditation to wonder at the secrets."

If all of this sounds, to quote Mr. Slatkin's introductory remarks, like "one of those kind of pieces," rest assured that it wasn't. It was fascinating, ingenious, and even a bit mischievous at times. Like McTee's "Double Play," "Einstein's Dream" clearly shows a lively and playful intellect at work. I'm not sure it leaves much room for interpretation by the conductor, though, as the live musicians are required to stay in synch with the recorded tracks.

Next at Powell Hall: John Storgårds conducts the St. Louis Symphony Orchestra and violin soloist Heidi Harris in Mendelssohn's "Violin Concerto" Sibelius's "Symphony No. 1," and Paufnik's "Landscapes" Friday and Saturday, October 24 and 25, at 8 p.m. The Saturday concert will be broadcast on St. Louis Public Radio. Steven Jarvi conducts the orchestra in "Never Play Music Right Next to the Zoo," a special Family Concert featuring Saint-Saëns's "Carnival of the Animals" on Sunday, October 26, at 3 p.m. The concerts take place at Powell Symphony Hall, 718 North Grand in Grand Center. For more information, visit the web site.
Posted by Chuck Lavazzi at 12:35 PM