Chuck's theatre choices for the weekend of October 10, 2014

New Line Theatre presents the St. Louis premiere of the musical Bonnie and Clyde Thursdays through Saturdays at 8 PM through October 25. The show is "a kind of horror Romeo and Juliet story, exploring the culture that created this infamous couple and their two-year murder spree, the moral ambiguity of Prohibition and the Great Depression, and a national cult of celebrity that turned these damaged, dangerous kids into national folk heroes, in their twisted quest for dignity in a time of national humiliation. Bloomberg News called the show, 'a pop romance about the American nightmare.' Today, in this time of economic distress in America, this story seems more relevant than ever. Not only could it happen again; it does." Performances take place at the Washington University South Campus Theatre, 6501 Clayton Road. For more information, visit the web site or call 314-534-1111.

My take: Frank Wildhorn, the composer of Bonnie and Clyde, is nothing if not eclectic when it comes to his choice of material. His shows include The Scarlet Pimpernel, The Civil War, and Wonderland: Alice's New Musical Adventure. Even if this were not a much-praised production, it would be worth seeing for Wildhorn's contribution alone. But, has it happens, the show has gotten plenty of good reviews locally. Writing for broadwayworld.com, Chris Gibson calls it "brilliant." "You'll be blown away by how engaging the story and characters are," he says, "and you'll be humming the score as you walk out the doors because it's just so incredibly and infectiously catchy." The St. Louis Theatre Snob concurs: "Under Jeffrey Richard Carter's musical direction, the New Line Band is tight, handling Wildhorn's score of depression-era blues, folk, gospel and rockabilly superbly...Seeing this production makes it hard to understand why it didn't last longer in NYC." Over at the RFT, Malcom Gay says it "should be on anyone's Most Wanted list." So maybe it should be on yours as well. 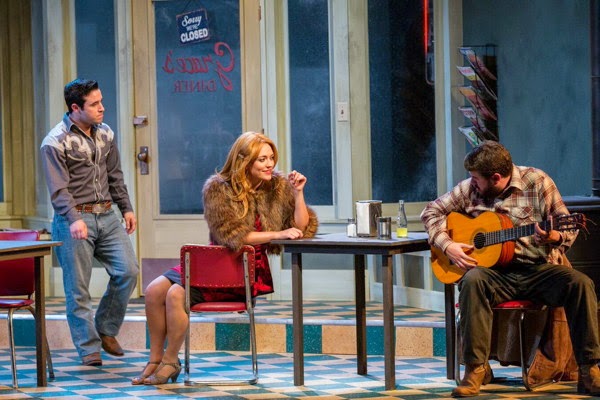 My take: William Inge's somewhat downbeat romantic comedy/drama had a respectable run on Broadway in 1955/56 (478 performances) and provided the basis for the 1956 film of the same name that gave Marilyn Monroe a chance to show that she was more than just a pretty face. " Overall this is a very strong production," writes Steve Callahan in his review for KDHX. "We see the growth in the central characters. ..If you've not seen this American classic, St. Louis University is offering you a lovely chance to enjoy it."

The Presenters Dolan present Katie McGrath: Love in the Desert: Romance in the Age of Scarcity on Saturday, October 11, at 8 PM as part of the Gaslight Cabaret Festival. "Nobody's better at love gone bad than Katie, who asks, 'In our world economy, scarcity is the problem of having seemingly unlimited human wants and needs in a world of limited resources. But this issue is also alive and well in matters of love. Why is it then, as we age and the prospective romance population shrinks, we become needier yet more demanding than ever?'" Neal Richardson is pianist and music director, with special musical guest Ethan Edwards on cello. The performance takes place at the Gaslight Theater, 358 North Boyle. For more information: gaslightcabaretfestival.com.

My take: I've watched Katie develop as a cabaret performer over the years and have never failed to be impressed with her professionalism and openness on stage. This time around she has the support of the immensely talented Neal Richardson as her music director and Tim Schall as her director. This was the same team that worked with me to create my own show Just a Song at Twilight: the Golden Age of Vaudeville, so I can say from personal experience that they're a couple of the best in the business.

Stages St. Louis presents the musical Always..Patsy Cline through October 12. "Jacqueline Petroccia and Zoe Vonder Haar star in the return engagement of the show critics called 'exceptional, must see entertainment.' The touching and true story of Country music legend Patsy Cline and her friendship with Texas housewife Louise Seger returns to STAGES this spring. Combining down home country humor, heartache and 27 of Patsy Cline's unforgettable hits such as 'Crazy,' 'Walkin' After Midnight,' and 'Sweet Dreams,' Always... Patsy Cline endures as a piece of genuine Americana." Performances take place at The Playhouse at Westport Plaza. For more information, visit stagesstlouis.org or call 314-821-2407.

My take: Call this a qualified recommendation. If you're a lover of Patsy Cline or country music in general, I think you'll have a great time at this show, which is really more of a celebrity impersonation review than a book musical per se. Jacqueline Petroccia captures Cline's voice and manner so accurately it's eerie and Zoe Vonder Haar is a hoot and a half as Louise Seger, the real-life Houston fan who became a close friends and correspondent of Cline. With over two dozen Patsy Cline hits performed to perfection by Ms. Petroccia and a six-piece band, the show is a real feast for fans. See my KDHX review for more information. 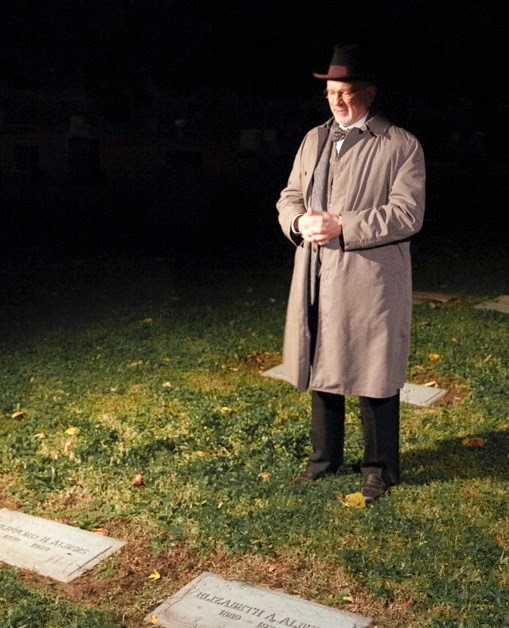 Valhalla Cemetery and Hawthorne Players present Voices Of Valhalla: A Hayride Through History October 3-11. Hayrides through Valhalla Cemetery depart every fifteen minutes beginning at 6:30 each evening as members of the Hawthorne Players portray some of the noted locals buried in Valhalla. A special indoor performance, featuring all of the characters, will be held on Saturday, October 4, at 5:00 p.m. for those who might have difficulty boarding and sitting on hay wagons. "This year's characters will include the granddaughter of one of Robert E. Lee's slaves, a hero from the Viet Nam war, the composer of a major Broadway musical, a dress maker who worked in the Washington Avenue garment district in the 30s, a young lawyer and Sunday School superintendent who got involved with gangsters, a St. Louis business man and politician who entertained Teddy Roosevelt, and a 'bionic comic' who continued to perform long after he 'died on stage'." Look for yours truly as composer and music critic Paul Tietjens (pictured). Valhalla Cemetery is located at 7600 St. Charles Rock Road. For more information, visit the Hawthorne Players web site.

My take: OK, so I have a vested interest in this project, as you can tell from the description above. That said, having seen the work by the other members of the cast, I think I can guarantee you a unique and very entertaining theatrical experience in this "hayride through history" as you meet some remarkable characters from our city's colorful past.
Posted by Chuck Lavazzi at 9:15 PM