The biennial Boston Early Music Festival (BEMF), which ran June 9 through 16 this year, is an annual cavalcade of Medieval, Renaissance, and Baroque music featuring top early music performers and ensembles from around the world. I covered it along with a raft of other critics from the Music Critics Association of North America (MCANA), which had its annual conference this in conjunction with BEMF.

Day three (Saturday, June 15) involved less dashing about than the previous day, which gave me a chance to wander about the exhibition rooms at the Revere Hotel. As you can see by the picture gallery at the end of this article, makers of a wide variety of historical instruments were well represented: viols, recorders, harps, Baroque flutes and violins (along with appropriate bows), and (of course) many varieties of harpsichord, clavichord, and organ—even old-style fortepianos of the sort Mozart and Beethoven used. All were clearly the work of master craftsmen (and women)—with appropriate price tags.

My first concert (2:30 PM at Jordan Hall) was one I’d been looking forward to: Jordi Savall and Hespèrion XXI (a group whose makeup, according to a fellow critic, consists of “whoever Jordi Savall is working with at the moment”) with “Istanbul: Dimitrie Cantemir’s ‘The Book of the Science of Music’ and the Ottoman, Sephardic, Greek, and Armenian Traditions”. Cantimir (1673-1723) was a noted virtuoso on a long-necked lute-like instrument called the tanbur as well as a composer and scholar. “The Science of Music” is both a treatise on music theory and a collection of 355 compositions which, according to Mr. Savall’s notes, “constitutes the most important collection of sixteenth- and seventeenth-century Ottoman instrumental music to have survived to the present day.”

About this genre (to quote Tom Lehrer in a different context) “I am knowing from nothing.” But it didn’t require an expert ear to appreciate the virtuosity of Mr. Savall (playing vielle and lyre) and his fellow musicians, who were: Hakan Güngör on kanun (a zither-like instrument played with metal finger picks), Yurdal Tokcan and Driss el Maloumi on oud (essentially a Persian lute), Haïg Sarikouyoumdjian on ney and duduk (recorder-esque woodwinds), Dimitri Sonis on tanbur and santur (relative to the hammered dulcimer), and David Mayoral on percussion.

[Mr. Mayoral’s battery included a doumbek, a hourglass-shaped metal drum that I’ve been playing around with myself, so I was watching him especially closely in hopes of picking up some tips. I wasn’t disappointed.]

This iteration of Hespèrion XXI produced an array of exotic sounds that brought ancient Istanbul to vivid life in the hart of contemporary Boston. You could almost smell the spices, feel the hot sun, and taste the thick, black coffee. This was music that was sensuous and joyful, and the BEMF audience—which seems to be less uncritically enthusiastic than most American classical music audiences—awarded them with a standing ovation rivaling the one that greeted “Almira” Friday night. The group responded with an encore consisting of three different versions of the same tune: Greek, Sephardic, and Ottoman. As an illustration of the rich multicultural stew brewing in Istanbul at the end of the 17th century, it couldn’t have been more perfect. 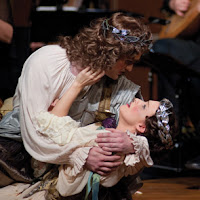 Seven PM found me back at Jordan for a double bill of chamber operas written for the court of Louis XIV’s unmarried cousin, Marie de Lorraine, by Marc Antoine Charpentier (1643-1704): “Le Descente d’Orpheé aux Enfers” (“Orpheus’s Descent into Hades”) and “La Couronne de Fleurs” (“The Crown of Flowers”). The score for “Orpheé” is incomplete—only two of the presumed three acts survive—so director Gilbert Blin created a kind of “Charpentier sandwich”, placing “Orpheé” between the second and final scenes of “Couronne.”

That’s not as odd as it sounds. The plot of “Couronne” (such as it is) has a chorus of shepherds and shepherdesses engaging in a contest to see who can come up with the most poetically beautiful paean to the magnificence of King Louis (Charpentier knew what to kiss and when, as they say). The judge is the goddess Flore and the prize is the titular crown.

The Orpheus story, in this context, is performed by the rustics as a way to demonstrate that even the ancient stories of the gods pale in comparison to Le Roi-Soleil. When the company gets to the end of Charpentier’s score, Mr. Blin has Louis XIV’s notoriously dictatorial court composer, Jean Baptiste Lully, walk on stage and invoke his royal privilege of restricting public performance of operas to his own works (which, historically, he did). The company then concludes by deciding that, since no mortal can adequately praise the king, the only solution is to divide the crown among all the contestants, wish Louis eternal life, and call it a day.

Charpentier’s score is, without a doubt, finely wrought and beautiful stuff. It was all magnificently sung and, like “Almira,” acted and danced in historically appropriate style. But even the remarkable Mr. Blin and his music directors Paul O’Dette and Stephen Stubbs—the team that scored such a hit with “Almira”—could not, in my view, overcome the dramatic inertia of this material. I also found it hard to stomach all the fawning praise of a particularly wretched monarch, but that’s just me.

That said, the audience appeared to love it all to bits and gave it a standing ovation.

Saturday’s late-night concert (11 PM at the Jordan) took us to an entirely different world. The early music ensemble Tragicomedia “and friends”, directed by Mr. Stubbs, brought us “Singen, Spielen, Trinken, Tanzen: Hamburg in Handel’s Time.” As the title indicates, this was a neat tie-in with “Almira” (which Handel composed for Hamburg) and, in fact, the program included a couple of scenes from the opera for which Handel was conducting the band from the harpsichord when he got the “Almira” commission: Johann Matteson’s “Cleopatra.” They were pretty silly stuff and went a long way towards explaining why the opera has fallen into obscurity.

But then, “silly stuff” characterizes most of what went on in this concert. This was nothing if not good-humored music-making and a reminder that guys like Telemann, Lully and (especially) Heinrich Schütz liked to have a good time a much as anyone. There was, for example, a slightly rude madrigal “Scherschliep! Messerschliep!” (“O shear-grinder! Knife-grinder!”) by Sebastian Knüpfer (performed with gusto by Jason McStoots, Zachary Wilder, and Christian Immler); a rudely rebuffed seduction scene played out with songs by Telemann; and a performance of Monteverdi’s lively “Chiome d’oro, bel Tesoro” (“Hair of gold, beautiful treasure”) from 1619 followed by Schütz’s satirical German translation from around 1650. It’s a reminder that parody lyrics didn’t start with Weird Al Yankovic.

Throughout the evening Harlequin, danced by Caroline Copeland, provided comic bridges between numbers and silently led everyone in a Knüpfer drinking song at the end. If there were any doubt that early music can be great fun, this would have dispelled it. I took the Green Line subway back to the hotel in a very cheerful state of mind. 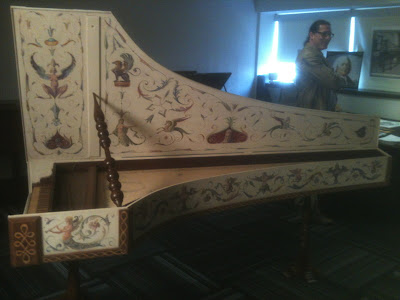 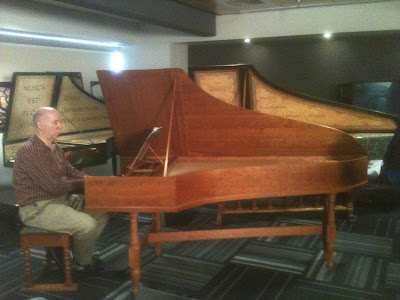 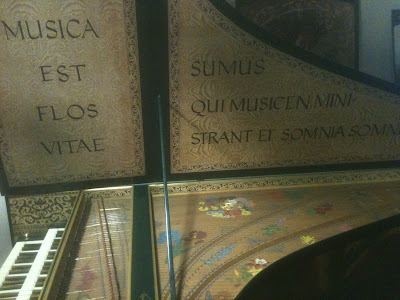 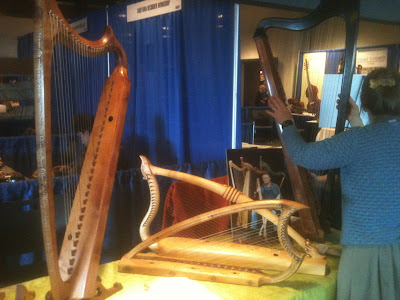 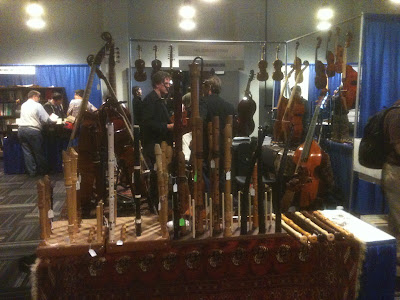 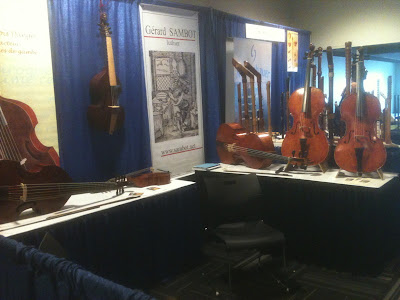 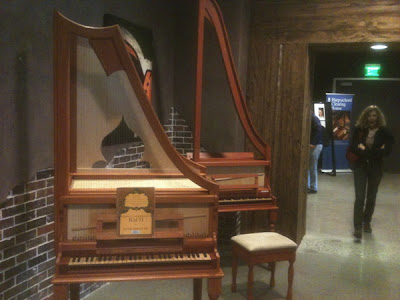 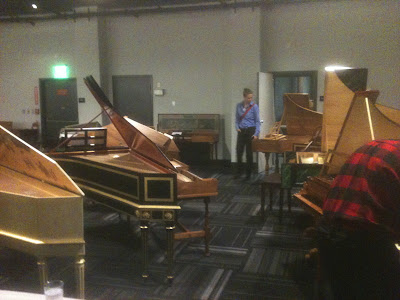 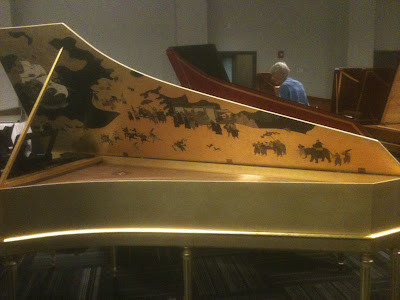 Posted by Chuck Lavazzi at 8:25 PM