The Cliburn Report 12: The Unanswered Question

[I will be covering the final round of the Van Cliburn International Piano Competition in June for 88.1 KDHX. Meanwhile I’m picking the best of the current press coverage for you dining and dancing pleasure.]

By that time each of those finalists will have played three 45-minute recitals and performed a piano quintet with the Brentano String Quartet. Starting on Thursday the final round, in which each one of them will play two piano concertos with the Fort Worth Symphony under Leonard Slatkin, will commence. The winners are announced at a ceremony on Sunday evening, followed by a black tie party at the Worthington Hotel.

It’s a punishing schedule and raises an interesting (and ultimately unanswerable) question: if he were alive today, could the 23-year-old Van Cliburn, who took the world by storm when he won the Tchaikovsky Competition in Moscow, win the competition that carries his name? 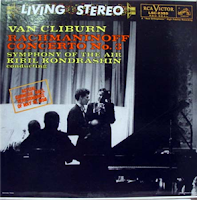 The evidence is ambiguous and scanty. Looking at the works Cliburn played in concert and on record, he was clearly at his strongest in the romantic Russian repertoire. His 1958 Rachmaninoff Piano Concerto No. 3 with Kirill Kondrashin and the Symphony of the Air is legendary. As cited in Joseph Horowitz’s 1990 The Ivory Trade, Aram Khachaturian called Cliburn’s performance “better than Rachmaninoff’s; you find a virtuoso like this once in a century.” Cliburn’s subsequent Tchaikovsky Piano Concerto No. 1 went platinum—the first classical LP to do so.

Outside of the Russian romantics, though, he fared less well. Here’s how Mr. Horowitz describes the situation:


Cliburn’s recordings add contradictory impressions. He never made another as ardent as his 1958 Rachmaninoff Third—unless it was the Rachmaninoff Second Sonata, also recorded in concert, in Moscow in 1960. In American studios, he recorded sixteen concertos eleven sonatas, and a variety of shorter solo works. Here, the Cliburn imprint remains sonorous and expansive. He majestically sweeps through his “Favorite Encores”—by Chopin, Scriabin, Rachmaninoff, and Schumann/Liszt—in love with their stormy rhetoric. Elsewhere, the lustrous sheen and monumental architecture attain a sort of embalmed perfection.

Cliburn also had no interest at all in chamber music. Add that to his limited musical interests, and one wonders how we would fare today in a competition that demands a variety in repertoire, including the piano quintet. Would he ever make it to that final round? One wonders.

Meanwhile, back at the competition, a bit of controversy has spring up around the revelation that Yoheved “Veda” Kaplinsky, the teacher of competitor Fei-Fei Dong, is sitting on the Cliburn jury. And she’s not the only one. As Andrea Ahles reports in the Fort Worth Star-Telegram today, “Two of juror Arie Vardi’s students, Claire Huangci and Beatrice Rana, performed Saturday. Jury member Dmitri Alexeev’s student Nikita Abrosimov played Saturday, too. In all, nine of the 30 competitors who started the 14th Van Cliburn International Piano Competition were current or former students of the individuals adjudicating it. Four of the jurors’ students advanced to the semifinal round, which started Saturday.”

This turns out to be far from unusual, not only at the Cliburn, but (as Ms. Alhes reports) at competitions in general:


Although it may seem like the world is filled with concert pianists and teachers who could adequately judge a piano competition, [former Cliburn chief Richard] Rodzinski said, there actually is a small pool of talent to draw on for contests at the highest levels. Therefore, he said, it would be impossible to eliminate teachers altogether from juries like the Cliburn’s or the Tchaikovsky’s.

“I think [the criticism of the Cliburn] is a little bit unfair,” Rodzinski said. “There are certain master teachers and obviously, Veda [Kaplinsky] is a master teacher. She’s also a wonderful juror.”

My feeling is that Mr. Rodzinski (son of the great conductor Artur Rodzinski) may be right. When it comes to competition-level pianists, teachers, and judges, “it’s a small world after all.”
Posted by Chuck Lavazzi at 10:39 PM