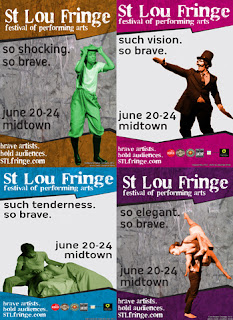 As I’m writing this (Sunday, June 23, 2013) the second St. Lou Fringe Festival is drawing to a close, with final performances 9 PM tonight. I saw eight shows this year and reviewed six of them for 88.1 KDHX. Rather than re-purpose all of them here, I thought I’d just give you a summary of each one with a link to the KDHX review.

“Underneath the Lintel” (Pat O’Brien Vanity Theatrics) – Absolutely the the best thing I saw, with an intelligent script by Glen Berger and a bravura performance by TV and film veteran O’Brien.

“Christy Strickland: Live at Satori” – A solid set of Great American Songbook classics that would not be out of place at the Jazz Bistro, especially given the solid backing of the Randy Holmes Quartet.

“Fairyland” (The Heather Dale Band with S. J. Tucker) – Straight-ahead Celtic folk rock in the tradition of Steeleye Span about the hazards of dealing with the Wee Folk.

“Caila’s Music Show” (Caila Lipovsky) – The sort of thing people are probably thinking of when they say they don’t like performance art.

“The Golden Goose” (Gateway City Opera) – A new opera company is a good thing, but the new opera they produced is pretty thin stuff.

I also saw the St. Louis Osuwa Taiko troupe, who provided their usual high energy and high volume show (once again, I forgot ear protection). Also as usual, it was highly entertaining and well worth seeing.

Finally, I caught the NonProphet Theatre Company’s “Montana: a Shakespearean Scarface.” I was originally cast in this but had to drop out because of early June travel plans, so I’m not a neutral observer, but even so I thought this fast and furious mix of gangland violence and iambic pentameter worked pretty well. I’ve never seen the film on which it’s based but a fellow critic who has seen it opined that they had really nailed it.

So there you have it. For more information about the St. Lou Fringe, visit stlfringe.com. The closing party is Monday, June 24, at the Schlafly Tap Room, starting at 5:30.
Posted by Chuck Lavazzi at 3:28 PM